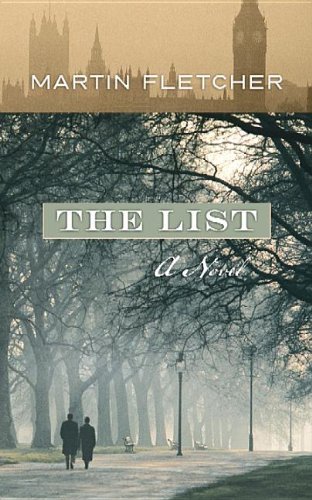 “When word gets around about The List, readers will clamor for their copy and devour this book.”

Juxtapose the madness of a frenetic newsroom, its various in sundry reporters and their desire for acclaim against the backdrop of political scandal, intrigue, and lurid sexual encounters, and you have The List. As a result of this combustible combination, readers get their money’s worth.

Not a moment is wasted in the plot of The List.

The roller coaster ride endemic in the world of sensation journalism is the backdrop for this novel. The characters mimic real life ambition with their risk-taking behavior to achieve power and unearthing skeletons their owners would rather remain permanently in the closet. But when the story adds the additional exploration of people in political power who have no behavioral boundaries, the plot quickly thickens.

The main character Adrienne Brown is a brilliant graduate in her late twenties from a prestigious college. She also has a plum job at Town and Country magazine that comes with myriad perks. She takes quite a risk by leaving her job to work for The Capitalist, an up and coming website and print publication in Washington, D.C. She is willing to accept a big pay cut to do so.

Adrienne is thrilled by the thought of working for a publication that may allow her to rise to the top in her field. After all, even the Washington Post writers are clamoring to work at The Capitalist. But to her dismay she is assigned to be the Style Reporter whose main task is tracking and interviewing celebrities.

Working unbearably long hours with little reward, Adrienne describes her feelings about her job by stating, “I convinced myself with a deep commitment to kissing political ass and a complete annihilation of my personal life, I could succeed at The List.”

The editors and other higher-ups pay no attention to the Style Reporters unless they make a mistake or fail to complete the ridiculously high number of stories per day that must be cranked out by each of them. By all accounts, The Capitalist newsroom is a pressure cooker with an extraordinary amount of discomfort in a high-stakes game of competition to be the first to break a hot story.

Adrienne is forced by her new lower salary to live in the barn of her parents’ country house outside of D.C., placing her far from the action going on in the city. Yet there is some comfort at times being with her family—except her sister who is clearly the star of the family. Not much love is lost between Adrienne and Payton, but ultimately they become allies in a caper that could make or break Adrienne’s career.

Through a complex set of circumstances, Adrienne pieces together a convoluted puzzle, capturing the attention of everyone at The Capitalist. Suffice to say that this huge story involves exposing a long-standing love affair between a powerful and married senator—and one of Adrienne’s most despised colleagues.

The excitement and intrigue runs high as Adrienne tracks, spies on, and breaks the big news that will give her the accolades she greatly desires. Although at times she questions the ethics of potentially ruining the careers of these two respected individuals, the story is something she is nonetheless driven to pursue.

Author Tanabe has written a contemporary, politically astute novel that is both wickedly humorous and enticing. She weaves references to current political figures such as Diane Feinstein of California, Hillary Clinton, and others within the story, adding realism to the plot centered on the higher echelons in D.C.

An interesting facet located at the end of the book is a section entitled “A Readers Club Guide” that explores topics and questions raised in the book. This section serves as an enhancement for those who desire to discuss the book in further detail with others.

The List has every element necessary in a great book: complex characters, an intriguing plot, and brilliant execution. When word gets around about The List, readers will clamor for their copy and devour this book.