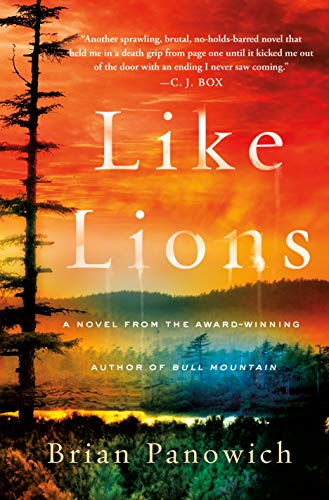 Writing the sequel to a highly successful first novel is a daunting task, to be sure. Expectations seem insurmountable, and the decisions to be made loom large. Extend the plot into Round Two? Keep the same characters, or branch out into other perspectives? After all, who remembers the follow-ups, the What-Came-Nexts when the debut was so remarkable?

In 2015 Brian Panowich exploded onto the scene with Bull Mountain, winner of the International Thriller Writers Award and a finalist for the Barry Award and the Anthony Award. His peers were effusive in their praise. Calling it “hillbilly noir,” John Connolly dubbed it a “fine debut,” and James Ellroy declared it “stone gas and a stone winner.”

What to expect, then from Like Lions, Panowich’s sequel? It’s also set in the hills of McFalls County, Georgia. It continues the story of Clayton Burroughs, still the sheriff but a broken man after the traumatic events of the first novel in which he was forced to kill his older brother to eliminate the Burroughs family crime business.

Bringing fresh secondary characters into the foreground, it explores the gnarly problem of what happens when a major criminal enterprise is removed from a place that has minimal law enforcement to begin with. Who fills the void, and what kind of mayhem do they bring with them?

Breathe easy and get reading, folks. Like Lions is an excellent novel, and one you won’t want to miss.

How should we describe Panowich’s fiction? To call it “hillbilly” noir doesn’t really seem to do it justice, as the term feels a little superficial and patronizing.

It’s certainly noir; there’s no doubt about that. Clayton is a bleak, lost soul, and violence swirls around him and the others as an everyday thing. Meth labs explode, burning young boys to a crisp; people are cut into pieces; and Clayton drowns a young punk in shallow water like an unwanted pup. McFalls County is a dark and unpleasant place to be.

The punk’s father, Coot Viner, vows revenge for his son’s murder, and the void created by the elimination of the Burroughs family crime business quickly begins to fill. But don’t labor under the false impression that Coot’s life has been critically damaged by the loss of his son. At the funeral, he sprawls in a pew, uncomfortable in his late father’s only suit, and yawns, bored:

“He knew all that mess about a great reward waiting in the afterlife was a load of shit. Dead meant dead—no more, no less—just dead. Anyone pretending to know any better was just a damn fool trying to make sense of their pointless existence.”

Noir, to be sure.

Approach this book, though, with the understanding that Panowich is a startlingly good writer with a firm command of his material. Not only is Clayton a solid, engaging character, but the others around him are equally well managed.

Even a lesser secondary character such as Bracken Leek, president of the Jacksonville, Florida chapter of the Jackals Motorcycle Club, is a rounded, three dimensional figure and not the stereotypic biker guy one might expect in a lesser novel.

In a scene that’s almost a throwaway, Bracken’s employees wait for him outside a cabin while he calls Vanessa, a business associate, to discuss Clayton’s refusal to cooperate in their plan to route opiods through McFalls County. A formidable figure in the crime world they inhabit, he reminds her of the consequences of breaching his trust. He waits for her response, and:

“The line was silent. Bracken watched Moe and Jayden through the broken slats of one of the cabin’s windows. They were laughing about something. Bracken felt the weight of them on his broad shoulders.”

This is just very fine writing, folks. Call it rural noir if you must, but Like Lions is excellent fiction, period. Buy, read, and enjoy.