Lion of Liberty: Patrick Henry and the Call to a New Nation 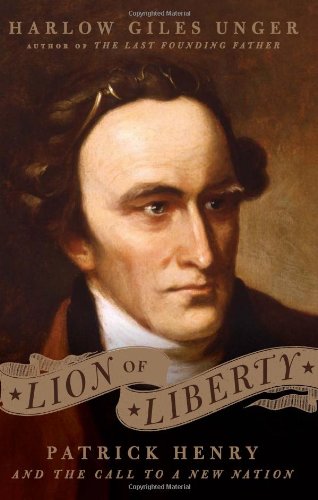 “Mr. President, it is natural to man to indulge in the illusions of hope. We are apt to shut our eyes against a painful truth, and listen to the song of that siren till she transforms us into beasts.”

Thus started the 1775 speech that lit the fuse leading to the American Revolution. We all know the final seven words to that speech, “Give me liberty or give me death,” yet few have read the entire speech. Even fewer know the remarkable history of the orator, Patrick Henry.

Harlow Giles Unger does a remarkable job of putting together the life and times of this most noted but little known Founder. Unger provides a startling history of the man who, though never in combat, remains one of the great patriots of his new country.

Unger also reveals the political structure of the new nation and the first of the political divides, state versus federal rights, as well as freedom of religion. Henry was the “backroom” man, providing direction and momentum for the anti-federalist movement, while understanding that a strong federal government was necessary for the protection of the new nation.

This is as much as a biography as it is a political thriller, beginning not with Henry’s birth, but in a courtroom, with his father as the presiding judge. He and his brother had already failed at business and farming, now Henry, age 23, stood in his father’s court, silent as if falling mute. His father and others believed that Patrick would once again fail, this time in the field of law. But Henry was solidifying his own rhetorical signature—one that would lead to his great political and legal success.

Henry, an Anglican himself, was representing the Baptists of western Virginia against the unwarranted demand for additional taxes. This court appearance placed Henry in the forefront in religious freedom, a position that would bounce back and forth over the fence over the next 40 years.

Unger is not only a superior storyteller, he is also a gifted researcher; he sweeps the reader into the story, also enveloping us in the times. The understanding of the political rift between the federalists and anti-federalist is one of the keys to comprehending the political landscape 225 years ago—and provides a basis for similar comparisons today.

The references to private letters, papers, and relationships make Henry a real person, not just an angry delegate in the Virginia House of Burgess. Details about his relationship with his first wife and her depression and eventual suicide; his 18th child—of seven by his first wife and eleven by his second; and his deep and passionate relationship with his children and Dorothea, his second wife, create a depth found in few historical biographies.

Lion of Liberty also takes us back to when medicine and patient care were still primitive. Dorothea almost died giving birth. Many of Henry’s children perished within their first year. Henry himself, suffering from debilitating ailments, decided not to run for president in 1796.

Henry’s full history highlights new meaning in his March 23, 1775 speech in Richmond. The book brings fresh insights to the process of building a nation with little direction from which to work. Fusing the stories of Washington, Adams, Madison, Jefferson, and Hamilton, the author allows for a better understanding the American psyche, both then and now.

Henry practiced his methodology of public presentation in his first major speech in that court with his father. His silence was planned with a full understanding of its theatrical effect, causing a great silence in response, with attention then directed toward the defense lawyer. It took the jury less than fifteen minutes to declare that the Baptists only owed one pence in taxes to the Anglican church instead of the equivalent of today’s $17,000. This was the first mark in Henry’s storied career and life. He would make many more in his short 63 years.

If you want to know what the Founders meant while deliberating the creation of the Confederation and the Constitution, and if you wish to understand why they made the decisions they did, read Lion of Liberty. The book explains why a choice had to be made on that March day: @font-face { font-family: "Calibri"; }@font-face { font-family: "Tahoma"; }p.MsoNormal, li.MsoNormal, div.MsoNormal { margin: 0in 0in 0.0001pt; font-size: 12pt; font-family: "Times New Roman"; }div.Section1 { page: Section1; }“I know not what course others may take, but as for me. . . . Give me liberty or give me death!”