The Lion and the Eagle: The Interaction of the British and American Empires 1783–1972 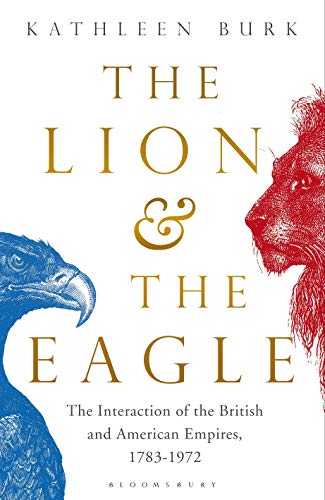 “The book is not a complete history of U.S.-British relations, but instead a narrower and more focused look at how as empires Britain and America struggled for power and influence.”

When the United States succeeded in breaking away from the British Empire in 1783, its leaders were not shy in declaring that America would be, in Thomas Jefferson’s words, an “empire of liberty.” America’s Founding Fathers recognized that throughout history the world’s leading powers were empires.

For the next 190 years, the British and American empires interacted on the world stage—sometimes as rivals and enemies, sometimes as allies. The so-called “special relationship” between Britain and the U.S. has frequently been exaggerated. Instead, both empires acted in accordance with Lord Palmerston’s adage that nations have no permanent friends or permanent enemies, only permanent interests.

Professor Kathleen Burk of University College London has written a fascinating history of this interaction in her new book The Lion and the Eagle. The book is not a complete history of U.S.-British relations, but instead a narrower and more focused look at how as empires Britain and America struggled for power and influence.

The British were mostly proud of their empire over which the sun never set. Many in the U.S., however, shrink from the notion of America as an empire. But, as Burk points out, “[f]rom its earliest days, the US was a land-based empire.” The century-long pursuit of Manifest Destiny was empire building by diplomacy (the Louisiana Purchase), war (the Mexican-American War), and the forcible uprooting of native peoples.

The U.S. became an overseas power at the end of the 19th century with the annexation of Hawaii and possession of Puerto Rico, Guam, and the Philippine Islands as a result of its victory in the Spanish-American War.

Though Burk does not mention it, the intellectual foundation for the American Empire flowed from the writings in the late 19th century of, among others, the American sea power theorist and historian Alfred Thayer Mahan, who greatly admired the British Empire. Indeed, Mahan was among the first observers to foresee that the United States would eventually replace Great Britain as the world’s most powerful empire.

Burk’s history is divided into four main parts. First, the British and American empires clashed over borders in North America—initially British territory to the west and later British control of Canada. The Jay Treaty resolved some of the disputes, but others were resolved by fighting and war.

Burk views the War of 1812 as a clash of empires. Great Britain in the 1790s and early 1800s was fighting for its survival against Napoleon in Europe and on the high seas. Its impressment of U.S. seamen—a leading cause of the war with America—was connected to its blockade of continental Europe.

Meanwhile, once an ill-prepared America declared war against Britain, U.S. strategy was to seize Canada. Burk notes that U.S. forces made eight attempts to occupy British territory in Canada between 1812 and 1814, and they succeeded only once and only for a brief time period.

The U.S. Navy won key battles on Lake Erie and at Plattsburg Bay, but Washington, D.C., was invaded and burned by the British (earlier, U.S. forces had burned York, now Toronto). Americans claim the War of 1812 as a victory, but Burk sees it as a draw. Britain signed the Treaty of Ghent ending the war because of events in Europe.

“[I]t seems clear,” she writes, “that although the United States had not ‘won’ the war, neither did it lose the peace. After all, by 1814, the US was internally divided, military weak and nearly bankrupt, and without Britain’s need to fight for its own liberty and independence the outcome of both war and negotiations would almost certainly have been different.”

U.S.-British disputes over the border with Canada continued to plague the relationship between the two empires. Burk describes in great detail the explorations and diplomacy that formalized the U.S.-Canadian border and avoided another full-scale war between the empires.

Burk next focuses on how the British and American empires sometimes cooperated and sometimes acted as rivals in seeking trade and influence in China and Japan.

Britain won the two Opium Wars against China during the 19th century, the U.S. sought its share of economic and political influence via the “Open Door” policy at the end of the 19th century, and both powers forcibly protected their citizens and interests during the Boxer Rebellion in 1900–01. “Anglo-American relations in China,” Burk writes, “were primarily cooperative,” but with America following Britain’s lead.

With regard to Japan in the mid-to-late 19th century, the reverse was true. Anglo-American relations with Japan were initially cooperative, with Britain following America’s lead. But early in the 20th century, Burk notes, Britain grew closer to Japan, while the U.S. increasingly viewed Japan as a rival in the Pacific.

The last part of the book covers what Burk describes as “the decline and fall of the United Kingdom as the supreme global Power and the rise of the United States to the same pinnacle.” Interestingly, Burk identifies the little remembered Venezuela Crisis of 1896, which involved a border dispute between Venezuela and British Guyana, as evidence of a “fundamental shift in Anglo-American relations” that “redefined the relationship.”

Britain acceded to U.S. arbitration of the dispute; in essence, recognizing and submitting to the Monroe Doctrine. After that, the U.S. refrained from condemning Britain for the Boer War, and the British supported U.S. annexation of the Philippines. British and American statesmen increasingly recognized the common interests of the English-speaking world.

The British Empire survived the cataclysm of the First World War, but despite imperial appearances (especially in the Middle East) it was weakened both economically and psychologically.

The crucial outcome of the Great War, according to Burk, was that the U.S. supplanted Great Britain as the world’s premier financial power. “In order to build and maintain a navy, an army and often a coalition,” she explains, “a country needs funds, and from 1919 the UK never had enough; it would have spent, but could not. The US, on the other hand, for the next decade could have spent, but would not.”

During the interwar period, the United States failed to translate its economic power into military power; the Second World War forced it to do so. During the war, British and American political and military leaders repeatedly clashed over strategy. President Franklin Roosevelt made it clear that America was not fighting to preserve the British Empire.

Indeed, Burk claims, with some justification, that one American war aim was to end the British Empire. Certainly this was true with respect to India. But as Burk points out, the U.S. still hoped that Britain would maintain its influence in, if not control of, the Middle East.

The final nail in the British imperial coffin was its decision to withdraw its forces east of Suez, which was implemented at the end of 1971. That is where Burk’s history ends because Britain for all intents and purposes ceased to be an empire.

Burk blames imperial and financial overstretch and a push by the United States for the fall of the British Empire. She suggests that the U.S. may suffer the same fate.