Lincoln's Secret Spy: The Civil War Case that Changed the Future of Espionage 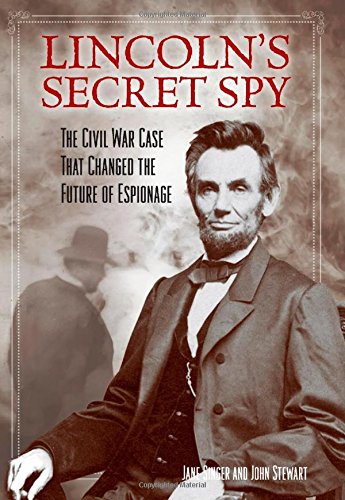 Swindler, serial bigamist, jail bird, theatrical promoter, and alleged spy for Abraham Lincoln, William Alvin Lloyd (1822–1869) was a man representative of the worst of his times, as the authors in their typically lyrical fashion wrote, “A MAN, A COMET, STREAKING THROUGH decades with impudence and impunity.” He even ran minstrel shows where appreciative white racist audiences bought tickets to see white men in black face paint satirizing degrading images of black men in the Jim Crow dance. (Lloyd also used songs he purchased from the budding composer Stephen Foster.)

The common thread in the career of William Alvin Lloyd is that he was what his contemporary Herman Melville termed a “confidence man,” from which we get the word “conman” during the period of the 1840s to the 1880s or the "era of good stealing," a period that had everything from traveling petty thieves to train robbery to colossal frauds like the Union Pacific's Crédit Mobilier scandalizing the nation. It gave birth to the Pinkerton Detective Agency (with its private eye symbol), city directories, railroad police, what would become the Dun & Bradstreet credit bureau, and private security.

The intelligence world of the Civil War had a place in this golden age of fraud and in different ways. Spies are liars by trade, made worse by often being mentally unbalanced like Belle Boyd; pathological like Loretta Janeta Velazquez and James George Brown; or opportunists like William Alvin Lloyd.

Neither side in the Civil War had a formal spy network. The opportunity for chicanery was exceptional, even for the times. Espionage and counterespionage was done by Individual contractors who by necessity worked in secret, like the Pinkerton detective agency or private individuals like Elizabeth Van Lew—which makes sorting out the truth from myth and self-promotion difficult.

The authors of Lincoln’s Secret Spy here explore the bizarre tale of Lloyd’s alleged espionage for the president of the United States, although the title gives its unnamed protagonist William A. Lloyd the benefit of the doubt. They have the experience to find the truth; Jane Singer previously published on the hidden history of the Confederacy’s secret weapons and weapons of mass death, while John Stewart pursued and brought to light the forgotten Lincoln assassination participants Tom Harden and Charlie Russell.

Singer and Stewart discovered that, with the help of a skilled lawyer, Lloyd convinced the highest levels of government of the truth of his phony claims. In fact, as shown in his railroad guides, he was actually a southern rights firebrand; he had been driven from his home in New York City by the pro-Union fever of 1861.

With a pass he may have actually acquired from Lincoln, Lloyd entered the new Confederate States of America to find subscribers for his guide to railroads, a perfect excuse for spying. Information that he cooperated with the Confederate government could be explained away as his means of obtaining information. Even better, that paranoid Confederate officials imprisoned him for six months on suspicion of being a federal spy bolstered his claim.

In the one element of his personality even remotely principled, he remained loyal to the southern cause, as the authors write: “he and other like-minded prayed that the South would not fall easily, submit to the blue coated savages, the Lincoln-loving curs.” His attorney later falsified documents and had associates commit perjury to support Lloyd’s lies.

With so many journalists out of work, the nonfiction market is currently flooded with works of limited scholarship that tell stories already better told or not otherwise worth the bother. This work, however, represents substantial scholarship in records only seldom used. The subject is worth a book length treatment to dispel the myth that Lloyd really was Lincoln’s private spy and to provide background on a United State Supreme Court ruling that, although based on a scam, still affects issues of national security to this day.

Lincoln's Secret Spy also has the admirable qualities of never losing sight of the epic scope of the Civil War era, and it never hides that the center of the story is a conman hatching a fraud. To the end, however, the reader is lured on by whether Lloyd will get away with his scheme to bilk the government. The book actually has a surprise twist ending.

This fully documented nonfiction Civil War history teaches a lot about an era. Lack of material about Lloyd, however, sometimes makes the background more of the narrative than the story, such as the author’s description of the river front in Louisville, Kentucky, “the showboats painted up like gaudy women, the riverboat pilots with their slick beaver-fur hats and sun-blistered faces; the cardsharps with snub-nosed derringers concealed among the ruffles of their shirts; the farmers in stained denim coveralls . . .”