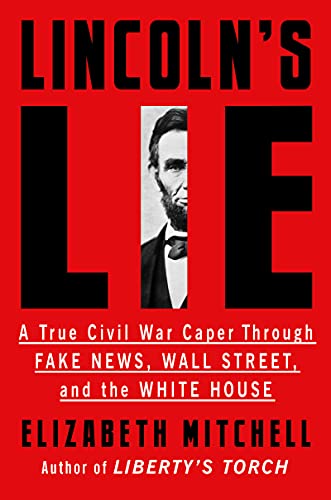 “Despite the many, many books on Abraham Lincoln, books such as this one bring us the closest to the real man.”

Public news production always is a complicated physical process with decisions made even more difficult by financial, legal, moral, and security/public safety issues that fascinate the outsider. Some scholars argued that lack of such an information system helped to bring down the Roman Empire. The situation proved no different in May 1864.

Elizabeth Mitchell in Lincoln’s Lie tells how a line in Abraham Lincoln’s 1864 proclamation for a day of Thanksgiving shocked the nation. Amidst the appalling war casualties of the Spring 1864, Lincoln threatened to reinstate the draft if 400,000 men did not enlist to join the blood bath of the American Civil War. Despite the many, many books on Abraham Lincoln, books such as this one bring us the closest to the real man.

In the decades immediately before the Civil War, “newspaper owners and investors had amassed muscle,” “print circulation had risen thirty-percent.” Mitchell tells the story of how reporters like Joseph Howard Jr., often with no background in journalism, made Lincoln’s public image and legacy through the wide syndication of newspaper stories.

Information moved at the speed of the railroad and the telegraph. Of the latter, operators “could hear stories, ideas, and congratulations” and financial transactions could happen instantly, heralding what would become our era of internet economics, all with Morse code as a new language. Newspapers, however, traveled farther than the railroad tracks and telegraph wires—even across time.

“Lincoln had in fact been playing the press for a quarter century,” starting as early as 1837, and carefully combined media with support from popular figures such as outspoken New York abolitionist Henry Ward Beecher. The latter advocated buying freedom for enslaved persons and sending guns to abolitionists in “bleeding” Kansas.

A minister could have the reach of a popular newspaper but Lincoln, as with other politicians, had to be careful of the message sent. In 1840, Lincoln even invested in a newspaper and much later he became the anonymous contributing editor to the Illinois State Journal. He even purchased a German language newspaper!

Early on, Lincoln had “shown particularly in guaranteeing positive reports” including anonymous letters to editors by Lincoln and friends. Sometimes he failed as with the negative reporting of how he, for security reasons, secreted into Washington as the president elect because of threats to his life.

Lincoln could also create fake news. He received a challenge to a dual for attacking James Shields with anonymous “scurrilous fiction”; “inventing fake witnesses and fake dialogue”; “and libeling Shields by calling him a liar and a fool.” By falsely claiming his wife as the author of the article, Lincoln escaped having to defend his “honor” with broadswords.

Mary Todd Lincoln, the wife, “was less beloved for being more outspoken” than the previous First Lady. She did not shy from voicing her political opinions or from fighting on his [her husband’s] behalf.” Reporters famously savaged her with attacks about such matters as her spending sprees and false claims about her personal habits. Even Joseph Howard Jr. defended her with only an account of her physical appearance!

Lincoln faced several challenges in his handling of the press. The many controversies of his administration of the Civil War that needed careful management included “a series of authoritarian acts launched in his first days in office” sometimes more than by divine than legal authority (including suspension of Habeas Corpus), the so-called Emancipation Proclamation, the draft, and more.

Lincoln waged his war as president with newspapers, public speaking, and telegraph. His Secretary of War had “iron fisted control over news leaks.” Across the history of the nation, however, “hoaxes had been used for multiple personal and public purposes.” The Civil War added the potential for dangerous consequences for fake news sent in telegraphs that became false newspaper stories.

The central story of Lincoln’s Lie takes pace in New York “with signs of the excessive wealth created by the war” but with “inflation caused by that trading and the release of paper money” that hurt the working classes that competed for jobs in the desperately overcrowded city. It had an infamous draft riot in July 1863 as the federal army at that time fought desperately at Gettysburg.

Publication of Lincoln’s call for 400,000 more enlistments in the bloody month of May 1864 gave the worst image of the failure of the federal war effort. At that moment, Lincoln had ill health, relentless unsolicited advice from his First Lady, enormous casualties, and a treasury bleeding money.

To that, now Lincoln had to deal with the potential problems that would arise from the proclamation. The president, however, did not write the proclamation. Finding the culprit, however, initially proved less important in the moment than trying to stop distribution of the newspapers and to quickly issue a retraction.

The War Department, on questionable legal content, immediately used the telegraph to arrest the employees and close down the offices of the New York World and the Journal of Commerce to find the culprit. Seizing the newspapers became a national scandal.

Most of the book deals with the subsequent search for the perpetrators of this dangerous hoax and their “sinister purposes.” New York Federal Marshal Robert Murray led the search from his “one-stop shop for investigations, arrests, and interrogations.”

Lincoln’s Lie is a true whodunnit that makes for a great mystery read with a guilty party and motive that will surprise. The first half of the book not only lays the background but provides the clues, not so much to make the result seem obvious as much as improbable consequences of this event proved no less interesting than the circumstances that created it.

The prose and storytelling are well done. Books like this one are notorious for narratives where a clearer chronology would help the readability and Lincoln’s Lie is not the exception. Lincoln’s Lie has annotation.