Lincoln in Private: What His Most Personal Reflections Tell Us About Our Greatest President 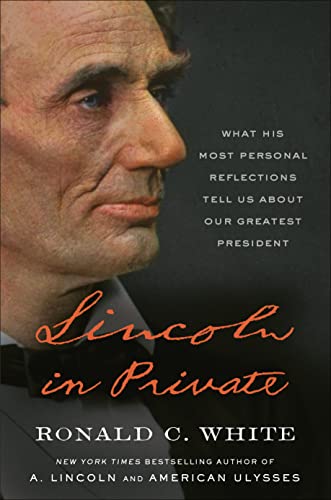 “These selected personal notes form chapters that describe Lincoln’s life in private moments. As a whole, they create a unique, intimate, highly readable, and personable biography of Abraham Lincoln.”

So many new books on Abraham Lincoln appear in a single year that they have a highly competitive and prestigious award dedicated to them. Yet understanding the man has proven problematic from his time to the present. Even for scholars, Lincoln seems so buried in legend as to have become unapproachable.

Abraham Lincoln kept his “best thoughts” on scraps of papers, just as accountants use scratch “working papers” to do informal calculations. “Many of these notes are fragmentary—incomplete—beginning or ending in midsentence.”

Lincoln preserved his ideas for future reference but also to remember. Some notes show his thought process in editing his speeches. For his First Inaugural, for example, “he would cut and paste until he was satisfied that he had arrived at the final shape.”

Several of these private writings likely have not survived, unfortunately. “It’s possible that Abraham Lincoln discarded various of his private notes,” especially when he became president, “deeming them no longer valuable to him” and “sensitive enough in nature that he would not allow them to be seen.”

Mary Todd Lincoln may have also burned some of these writings. A note Abraham Lincoln wrote on how he saw democracy she gave away to her deliverers from an insane asylum in 1875.

Ronald C. White, in Lincoln in Private, has “written a guidebook” for a dozen of the scraps but that sample will “reveal new and interesting aspects about Lincoln” from across his career. A respected Lincoln scholar, White admits to in these notes, “encountering, in many ways, a whole new man.”

In the first two selected notes Lincoln writes of a visit to Niagara Falls (1848); the second on “Lincoln’s self-understanding of the vocation of a lawyer” for a speech he never gave. White uses the former for a dialogue on the falls but also on politics. On the second note, the author discusses Lincoln’s “spotty” railing against the War with Mexico at the end of his first political career.

“The story of Lincoln’s reentry into politics in 1854, fighting against a Kansas-Nebraska Act” includes five of the chosen scraps. From these same ideas would come the Lincoln-Douglas Debates, the Republican Party, and President Abraham Lincoln. The president determined that his native state of Kentucky would remain in the Union.

Other notes document Lincoln’s evolving view of slavery. “Even after 1854, he focused his attention on the how and why the institution of slavery was so bad for the slaves” and, “by the summer of 1858, he began to turn his attention additionally to what slavery did to the master.”

Included in the sampling in Lincoln in Private are Lincoln’s reply to a letter from his former friend slave owner Alexander H. Stephens and a speech Lincoln never gave on slavery. The latter note “has been sitting within the Lincoln papers for 150 years, largely unnoticed.”

The last writing concerns Lincoln’s still not understood feelings about religion. Lincoln suffered from confusion from the different versions of God presented to him over his lifetime. White asks “from the privacy of the Executive Mansion, did he think that this purposeful God might give the victory to the Confederacy?”

These selected personal notes form chapters that describe Lincoln’s life in private moments. As a whole, they create a unique, intimate, highly readable, and personable biography of Abraham Lincoln.  White concludes Lincoln in Private with transcripts of the 111 notes, annotation, and a bibliography.