Lincoln and the Irish: The Untold Story of How the Irish Helped Abraham Lincoln Save the Union 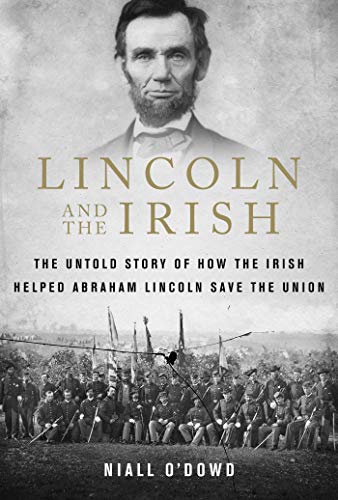 “With the word refugee as divisive now as it has ever been, O’Dowd’s book, examining how fresh off the boat migrants fleeing starvation and persecution helped to save the Union, could not have been better timed.”

It is estimated that more than 15,000 books have already been written about Abraham Lincoln. Nevertheless this latest offering is worth the read, particularly if you are looking to put a little more meat on the bones of the Irish connections to this towering, historical figure.

The book’s presentation is more a collection of essays or articles rather than a cohesive volume. While the repetitiveness of certain facts grates at times, it is nevertheless an enthralling read with snippets of information and coincidences that fascinate as well as an informative text.

Since his death, Abraham Lincoln has enjoyed cult-like status around the world. Leo Tolstoy, for one, declared: “The greatness of Napoleon, Caesar or Washington is only moonlight by the sun of Lincoln.” Yet the path of American history and one of its greatest sons could have been very different. James Shields, a “gallant, hot-headed bachelor from Tyrone County, Ireland,” challenged Lincoln to a duel in 1842. Fortunately for the world, the two Seconds intervened at the last minute, averting the certain death of at least one of the combatants, with a hasty apology. Even so, according to O’Dowd, Lincoln had a fairly good chance of victory as he had shrewdly selected “cavalry broadswords of the largest size” as his choice of weapons. With his towering height, long limbs and thus longer reach, Lincoln would surely have had the edge. Had the choice been pistols and the duel gone ahead, he would almost certainly have been killed.

Despite Lincoln’s ominous early encounter with an Irishman, he admired and enjoyed the company of many of the Irish people with whom he crossed paths with—even Shields, with whom he nearly crossed swords, remained a friend.

Indeed, without the Irish contingent in the Union army, the outcome of the civil war could well have been very different. Lincoln knew that the outcome of the struggle would eventually come down to a numbers game, and the number of Irish soldiers fighting the Union corner proved decisive. In battle after battle, regiments of Irish soldiers were the crucial factor. But many thousands of Irishmen were slaughtered and accusations of “cannon fodder” fueled the New York City draft riots in 1863.  Yet still they enlisted, or were cajoled by fair means or foul, into the arms of the Union even as they stepped off the boat from Ireland.

O’Dowd credits three Irishmen in particular with bolstering Lincoln with the sheer numbers they could attract to the fray. The first, Thomas Francis Meagher, had rejected his privileged background in Waterford, Ireland and migrated to the United States. He led the victorious “Fighting 69th” brigade as Major General, prompting Lincoln to kiss the 69th flag and exclaim “God bless the Irish flag.”

The less famous General Michael Corcoran was an Irish hero at a time when anti-Irish sentiment could run just as strong as anti-slavery. Corcoran was also the USA’s top Fenian, the secret army that would one day fight a battle far more important to the:  the struggle to drive the British out of Ireland, using expertise gained during the American Civil War.

The “fake news” of the period was just as distasteful and pedaled ferociously by both sides. Racist lines were drawn and deepened, not only with anti-Irish sentiments, but frequently taunting the Irish with assertions that they were the most likely to lose their women to “Miscegenation: The theory of the blending of . . . the white man and negro.” A pamphlet of the time extolled not only that white Irish women love black men but also that “the Irish were lower than the negro . . . a more brutal race and lower in civilization.”

Yet despite the suspicions and hatred of these migrants, Lincoln and the Union prevailed—in no small part thanks to the sheer numbers and fighting spirit of its Irish soldiers. With the word refugee as divisive now as it has ever been, O’Dowd’s book, examining how fresh off the boat migrants fleeing starvation and persecution helped to save the Union, could not have been better timed.

Viv Young is a staff reviewer for New York Journal of Books.