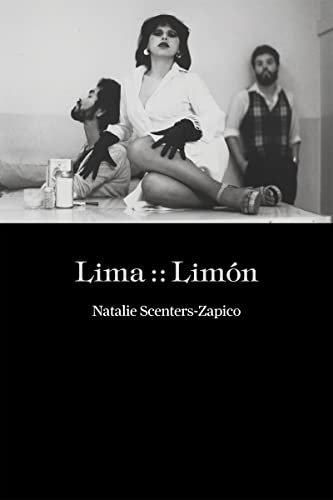 Appropriately, given the current challenges faced by women of color, the last few years have seen a resurgence and a reclaiming of the contributions of non-white, non-binary feminist poets.

If it’s true that books always find their right audience, then we should soon see the work of Natalie Scenters-Zapico take its place among those revered names, thanks to her new book Lima :: Limón, an exhilarating collection of feminist thought in verse form that never forgets to make music while sharply making its urgent, heartbreaking points.

Lima :: Limón is smart and credible when depicting the hate and societal stupidity that feminists fight against, remembering to scream in song, never allowing itself to shriek too hard, turn tone-deaf.

But that it keeps its head, does not mean it’s a neat little box. It’s not. Instead, it’s punch-drunk and lucid. It is pissed as hell-angry-and-won’t-take-it-any longer, while also allowing for reflection and for the sadness of all the battles that there’s not the strength, or enough empowered women, to fight. It is, perhaps, at its strongest in its sarcasm, which it makes clear is the particular sarcasm of fear and impotence, of the woman or girl who knows that saying what she thinks can swiftly land a man’s hand hard on her face, as in these stanzas from the wonderful poem, “Neomachismo:”

“Anger is the emotion of men, by adding sugar, lime & salt you can turn

“When he says you’re letting this happen, don’t reply. Put his fingers

in your mouth & hold your breath when he asks: Who taught you to hate

The obvious melody of those stanzas carries through the entire book. Miss Scenters-Zapico’s music is so accomplished, that the book often reads like the score for a play, an opera that returns again and again to sound the same notes in different ways, as in this stanza from “He Has an Oral Fixation:”

“He woke up to his mouth full of bees,

his gums. He writes: There’s something

beautiful in the way a mouth can be broken.”

Like a good book of feminist poetry by a writer of color (Ms. Scenters-Zapico is a fronteriza, and, so, uniquely aware of the challenges of existing between two cultures), Lima :: Limón is about machismo, about its violence and effect on a woman’s body and soul.

But it’s also, in a way, about the ways in which immigration on both sides of the cultural and physical border, family, motherhood, femicide, and, of course, love, often act as accomplices, working in tandem against women searching for strength in individual identity beyond culture, race, and familial structure.

“This world tells them I hate you every day

& I don’t keep this from mis hijas

because of the bus driver who kicks them out

onto the street for fare evasion. Because I love

mis hijas, I keep them from men who’d knock

their heads together just to hear the chime.”

Yes, the love in Lima :: Limón is violent and sad and angry and impotent and sarcastic, but not confused. It knows what it knows and even knows when not to say it knows. Like limes and lemons, love in these poems tastes differently depending on the narrator’s level of power on the day she depicts, sometimes more bitter than expected, sometimes, after pairing with sugar, sweetly hiding its capacity for inflicting pain.

In the end, though a book about men and women, it points its sharpest finger beyond that unit of two enacting the dynamics of power and submission, and trains it on a society that continues to allow the dehumanization and brutalization of human beings as a matter of daily course, and by the very people who should love and protect them.

In this way, it leaves the sex wars aside and goes beyond the perspective of womanhood in ways reminiscent of an Ana Mendieta performance video, or of Sandra Cisneros’ Loose Woman and My Wicked Wicked Ways. Only Lima :: Limón is better, as if it had traveled longer and more diversely. As if in looking inward, it didn’t forget to look out at the sisters whose story it is telling.