The Likeability Trap: How to Break Free and Succeed as You Are 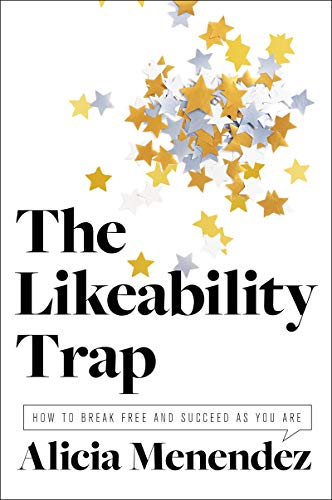 “Menendez provides a realistic and hope-filled roadmap to success. This is a must-read for all working men and women who value equality in the workplace.”

In The Likeability Trap, Alicia Menendez dissects common pitfalls specific to women in the workplace with an emphasis on the pressures uniquely placed on women to be friendly and accommodating with colleagues. The book makes the case that, whether or not they engage with likeability directly, value likeability, or strive to be likeable, women do suffer from their likeability, or lack thereof, because the culture in which they work includes traps in every direction. Written in an informal, approachable style, it tackles the question, “If likeability matters, but I can’t be both likeable and successful, then where does that leave me?”

The first half of the book describes the general work culture from a woman’s perspective. Menendez explains the setbacks women face in relation to likeability, how it affects them, and how women regularly and unknowingly help to perpetuate them. She describes how women suffer in their careers when they are not likeable enough and how men with the same behavior and demeanor excel. She identifies the penalties unique to women, supporting each claim not only with anecdotes and interviews but also with quantifiable research by social scientists. Among these strongly supported claims is that unlike men, women face what Menendez calls “The Success Penalty: as a woman, the more successful you become, the less others will like you. Just because.” And if a woman is pressured to be likeable in the workplace, this puts her in a situation where she cannot win.

In part two of the book, Menendez skillfully guides us over, under, around, and through the minefield described in part one. Ultimately, she asks the reader to question what prioritizing likeability costs women and what positive changes could result from letting go of that continual effort to be considered likeable. Menendez leads the reader away from this “well-intended counsel” of previous decades because it is “distracting us from the more fundamental shift” that needs to take place. She takes a global view, arguing that “in order to free ourselves from the tyranny of likeability, we have to shift away from talking about how women do their work and focus instead on the work itself. To fully empower women to lead, we have to stop asking women to reimagine themselves and, instead, encourage everyone to reimagine leadership.”

One of the most outstanding features of The Likeability Trap is that it does not treat minority women as a footnote. Rather, it spotlights intersectionality. Minority populations in the workplace are fully considered and frequently addressed in a way that all readers should find enlightening and helpful.

Menendez points out that, despite the traps around likeability, minority women don’t even have the luxury of assuming they can fit in and meet the unfair and unrealistic expectations placed on women as a whole. If the work culture in general was formed without women in mind, and then a new set of (unequal) standards were formed as women joined the workforce, then the minority woman is at a compounded disadvantage because she is being measured against a set of standards that still do not include her. When these women inevitably fail to meet an even narrower set of expectations, likeability “often becomes a cover for unconscious bias.”

The unconscious bias tied to likeability is a sticky subject—nebulous and slippery and hard to prove. Well researched and convincing, The Likeability Trap examines the unique ways in which women are at a disadvantage at work. Considering each double-standard, Catch-22, and hidden penalty in turn, and then leading the reader away from the impulse to forsake individual strengths in the name of likeability, Menendez provides a realistic and hope-filled roadmap to success. This is a must-read for all working men and women who value equality in the workplace.

Leslie D. Davis is a freelance writer who has been on the faculty and a lecturer at Berkeley College, Ivy Tech, and Purdue University, teaching French language, literature, and linguistics. She has also been an educational consultant.