The Lightning Rod: A Zig and Nola Novel (Escape Artist, 2) 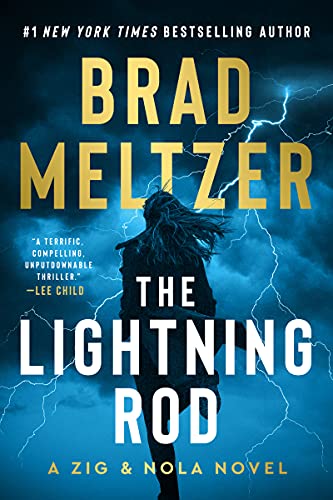 “The Lightning Rod will suit readers of James Patterson, Stuart Woods, Hank Phillippi Ryan, and John Gilstrap. Don’t look for character growth or deep revelation about how the government and military operate—stick with light thriller expectations, and The Lightning Rod will provide rapid-paced entertainment.”

The Lightning Rod is the second in Brad Meltzer’s new thriller series that features “Zig and Nola”—where Zig, Jim Zigarowski, is a mortician but no longer working for the government, and Nola is a government-contracted artist—and, incidentally, a dangerous and damaged person with limited interpersonal skills.

That would be enough on its own to establish peril and risk. Add in the slain Lieutenant Colonel Archie Mint and his colleagues, and the chase scenes feel like a packed party favor, aching to explode.

Mint’s family appears to have no idea the officer had a second military assignment, working at Dover Air Force Base, which for Zig has been home base also: “home of the mortuary for the U.S. government’s most high-profile and top-secret cases.” It only takes Zig a few minutes of attempting to restore the corpse’s facial makeup to realize there are some very peculiar things going on. In fact, being called into the mortuary work for this funeral is peculiar in itself.

When Zig discovers that the unpredictable and ferocious Nola—who is also an orphan who’s suffered in the foster system—documented in her drawings this murdered officer and two others, one of whom is already dead, he realizes there are no coincidences here. Only deliberate hunting and shooting, not to mention cutting of throats, when the hired help of the dark net get involved.

Most difficult to manage is the entanglement one of Nola’s family members (and Zig is astounded to find that she had one), Roddy LaPointe. Roddy brings more potential explosions, but also some clarity:

“‘From what I could find, all three were in the same unit,’ Roddy explained, swiping back to the painting [done by Nola] and enlarging the photo to enhance the logo on Mint’s jacket. A hand grabbing two lightning bolts. Semper Vigiles.

“‘Army Security Agency,’ Roddy explained, again checking over his shoulder. This time the street was quiet. ‘Dates back to World War II, when they did high-end investigative work—top secret and above—stuff they didn’t even trust to the Army intel folks.’”

As Zig and his collaborators dig into what the investigators had uncovered, he finds many who are determined to keep the facts buried. If it weren’t for the way Nola is coming apart at the seams, and her dangerous brother, Zig might back out—especially because his ex-wife is tugging him toward a very different investigation.

The action and entangled threads make this a page-turner, with big doses of both military weaponry and tech complications. Meltzer’s habit of very short chapters and many points of view do chop the flow, and there are multiple flaws in “continuity” among the rapid scenes. Red herrings and McGuffins abound, too. So read this one as quickly as you can, surfing the classic thriller ambience and not asking too many deep questions.

The Lightning Rod will suit readers of James Patterson, Stuart Woods, Hank Phillippi Ryan, and John Gilstrap. Don’t look for character growth or deep revelation about how the government and military operate—stick with light thriller expectations, and The Lightning Rod will provide rapid-paced entertainment.