Lightning Flowers: My Journey to Uncover the Cost of Saving a Life 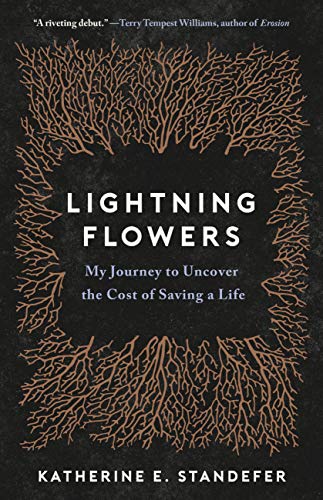 Katherine Standefer’s memoir about the medical device that saved her life and her quest to discover what it cost in terms of the environment and human lives starts with a jolt and keeps up the pace, not unlike the device itself. Standefer begins by recounting the time her defibrillator shocked her while she was playing intramural soccer as a graduate student. Her sparse language makes her words more powerful: “The smell of burning, which was me.”

Standefer tells the story of her deteriorating health alongside that of the creation of defibrillators, traveling to Africa to see where the metals it contains are mined. She wants to know if it is worth it or if the cost is too high. She is not asking a philosophical question but a question that impacts her life. The brutal reality of that impact is made clear when her sister, a college freshman, startles awake during heart surgery. It is hard not to feel the family’s fear. And that is even before Standefer reveals she also has the defect, starting that chapter with the page-turner “On the last morning of my first life . . .”

Standefer first learns about the particular heart defect that runs in her family when she is in her early 20s and without health insurance. She avoids getting tested. It is a choice she makes because she is young and healthy. It is an individual choice. Although suffering from debilitating illness, Standefer manages to find beauty and wonder in her world. Her description of the burns left behind by lightning strikes that provide the name for the book reads like poetry.

“Fernlike, following the patterns of rain or sweat, they are rose-colored lightning bolts frozen onto the body, as beautiful as they are terrible.”

A harrowing journey that raises big questions, Lightning Flowers also offers intrinsic truths. Standefer observes of new relationships, “The space that opens between two people is never quite predictable . . .” She describes how old furniture is dragged from place to place “like quiet family members.” Then there are the harder truths obvious only to those who have been young and ill: “those from whom something is being taken that they did not realize they had.”

Loss is a major theme in the book, and Standefer is justified in being angry at the loss of a relationship between patients and practitioners. There is the doctor who tells her she is fine— and in danger at any moment. The absurdity of the American health care system is on full display when she is advised by those in the medical field to fake cardiac arrest so she can obtain heart surgery in a more affordable manner. She is playing with her life and yet the game is necessary. Even after the Affordable Care Act is passed and she is able to obtain insurance Standefer still finds extreme inequalities in quality that might seem minor except that we are talking about her life.

Then there is the loss in the places where metal is mined to make the devices, in this case Madagascar. Standefer is not sure what the loss is but recognizes it is there: “however much a western presence in these towns created strife, it also came with a brief bright hope—that someone, at long last, would be accountable for improving their lives.”

While it is impossible to answer the questions she raises, a little more political context in the Great Lakes Region of Africa would have been nice. When Standefer says Rwandans are silent, she mentions their culture, but not the police state they live under. In the Democratic Republic of Congo she talks about legislation passed that requires companies to disclose their use of conflict minerals but not complaints about how the legislation impacts certain miners. These are minor criticisms. Standefer is at her strongest talking about the shortcomings of the American system. When a surgery goes wrong and the surgeon does not address her afterward she laments how he left her without the story of her body.

As a writer Standefer sees a story in everything and the story she discovers about her own body is a difficult one: “But the body is a story always advancing toward one end.” The harsh reality she faces and her graphic medical descriptions are sometimes difficult, but the insights they provide are a gift.