The Lightest Object in the Universe: A Novel 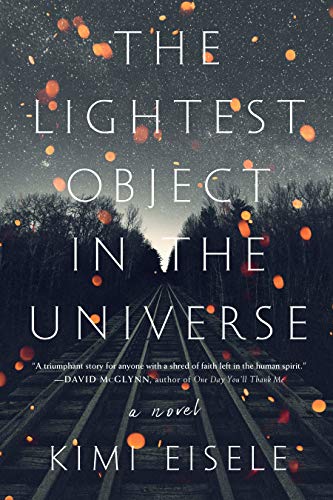 “an intriguing and engrossing debut novel that will leave readers thinking about their own ability to survive, their own capacity for love, and their willingness to face catastrophe with hope.”

Kimi Eisele's The Lightest Object in the Universe is a compellingly realistic depiction of the world after the collapse of civilization, although at its heart, it is a love story told in the vein of Cold Mountain.

Eisele's two main characters, Beatrix, an economic social justice warrior, and a school principal, Carson, find themselves stranded at opposite ends of the USA when the world tumbles into literal and spiritual darkness. Rogue strains of flu have decimated the population, hackers have disabled the electric grid, the economy has collapsed, and the government has abdicated its duties, leaving individual citizens to fend for themselves.

The world after the fall of modern civilization is well-drawn and feels authentic, while the essence of the novel is about overcoming grief and allowing love and hope back into your life. In this new world, everyone has lost someone; everyone is mourning the world they left behind.

As one character tells Carson, "Grief slices you down the middle. It takes a good long while before any sweetness returns. And even then, the hurt still comes, like heavy clouds." But then she goes on to instruct him to dance. "Sometimes when you dance, joy slips in. Even when you think it's not possible. Doesn't erase anything but makes space somehow."

Determined to find Beatrix and declare his love for her, Carson makes the difficult choice to abandon his currently secure, but always precarious Manhattan apartment, given the violent gangs roaming the city, and trek across the country, following the railroads leading to San Francisco. His odyssey and the characters he meets along the way form the spine of the novel, a roadmap through the heart of a fallen America.

Beatrix, meanwhile, is tempted to leave—it is in her nature to explore, just as it is in her nature to guide communities—but when she sees how her San Francisco neighborhood is coming together, forming a new, cooperative way of living, she decides to stay and help. Driving her choice are her friendships with her fellow housemates, including a grandmother and her teenaged granddaughter, Rosie.

Out of the darkness comes the voice of hope, powered by an unknown source carried across the airwaves, a preacher promising bread and honey, salvation, and paradise at the "Center." As pilgrims flock across the land, drawn by his mesmerizing voice and their dreams of a better world, Beatrix fights and fails to prevent Rosie and her grandmother from heeding his call, while Carson discovers an unnerving truth about the preacher and his Center.

Rosie's character and her journey are the most undeveloped subplot in the story, which is frustrating as not only is she pivotal to Beatrix and Carson's possible reunion, she also witnesses the most dramatic event of the story, yet it feels glossed over and rushed. Rosie's character is introduced with heavy-handed hints of a magical realism twist to the story, but this element is quickly dropped except for a few irritating reminders of what Rosie's gift might have shown her but never does. As a teen witnessing these immense events and re-learning everything about the people and world around her as well as maturing into what will come to stand for "normal" in this new world, Rosie had the potential to add additional nuance and depth to Beatrix and Carson's story. Unfortunately, she's not given enough room in the story to fully explore how the profound and mundane events she witnesses change her.

Despite this, The Lightest Object in the Universe is an intriguing and engrossing debut novel that will leave readers thinking about their own ability to survive, their own capacity for love, and their willingness to face catastrophe with hope.