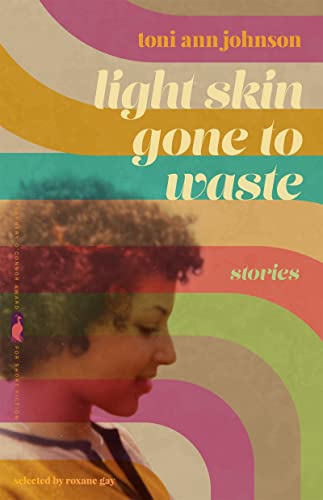 “Reading Light Skin Gone to Waste will remain with us as a multilayered experience and an exquisite example of the art of contemporary American short fiction.”

In Light Skin Gone to Waste, Toni Ann Johnson depicts the life of a young African American family moving to Monroe, NY, in the late 1960s. In this enthralling series of interconnected stories, Johnson not only intersects policies of race, gender, and class, but also treats each character with honesty by seamlessly shifting points of view.

In “Up That Hill,” Phil and Velma Arlington understand that to break the cycle of poverty and overcome the challenges of racism, they need determination and grit. They bravely move some 50 miles north of the Bronx where they both grew up. “When they reach the town of Monroe, Vel’s eyes grow wide at the sight of the large Victorian homes adorning grassy hills, like crowns.”

He holds a PhD in Psychology that she helped him earn with her hard work, as she frequently reminds him. The young, attractive, and educated couple join social clubs where they rub shoulders with doctors and dentists; they hire lawyers and travel extensively as they slowly navigate the daily dose of micro and macro aggressions chipping into the joy of achieving their goals.

Phil and Velma are not as picture perfect as they would like themselves to believe. He does not spare his wife the picture of a naked white woman in the middle of the living room in their new home. Velma’s initial assertiveness has a hint of violence ringing like a warning sign.

Phil and Velma’s only child, Maddie, who is barely mentioned in the first story, leaps into a protagonist role in “Claiming Tobias.” Thus, we learn about Phil and Velma’s failure as parents to protect the young Maddie from the full force of racism. Cruelty both at school and in the neighborhood common spaces leaves the young Maddie, barely five, with a broken heart. In “Lucky,” the family takes a trip to West Africa where the Arlington’s social ambitions turn into neglect when they ignore Maddie’s intuition in the face of danger. Their poor decision scars Maddie with permanent psychological trauma, which ironically her well-educated parents are unable to understand.

The domestic helper, Gertie, only a shadow in previous stories, becomes a main character in “The Way We Fell Out of Touch.” Her voice brings perspective not only to the brutal racism the Arlingtons face as a Black family, but also to the painful intimate details of their sexual life. In Gertie’s eyes, Phil is not just a womanizer, but an insensitive husband, cruel even. The domestic helper and the employer’s voices take turns narrating events—a clever display of Johnson’s craft as a fiction writer. Gertie does not understand all the nuances of racism, but she is able to draw judgement on the man from all the prophylactics she finds while cleaning their house.

Perhaps the most delicate literary resource is the frequent shifts in points of view. The omniscient narrator's certainty disappears for the ambiguity of the second person, to the unreliability of the first person. This strategy helps the author connect the stories seamlessly by offering different perspectives of the same characters. Thus, Johnson manages to depict the factors that influence the development of the young Black child growing at the receiving end of both the racism of their community and the deterioration of her broken home.

Masterfully, Johnson uses secondary characters to act as a Greek chorus in a tragedy, offering commentary on actions and events taking place in front of the child. In “Lucky,” Xavier, the room service clerk, articulates the judgement the reader wants to hear. “And they left you? Alone? With this idiot?”

In “Wings Made of Rocks,” another secondary character gives us insight to understand Phil’s emotional wounds. His mother Emily explains the basis of intergenerational trauma in a brief dialogue. “I may have hurt you when I tried to make you compete with your brother. Your grandmother did it with me and my siblings.”

In “The Way We Fell Out of Touch,” Gertie serves as a reminder that even the poorest and uneducated white American at one point feels superior to the regular Black family. The class, gender, and race policy intersect loudly in this brief story.

In “Light Skin Gone to Waste,” a coming-of-age short story, Maddie faces the quintessential Black woman hair issue. Light skinned like her father, Maddie understands that when she is not in Monroe she passes as white and is more attractive to teenage boys. But in Long Island, surrounded by cousins, her light skin is only attractive if it is paired with good hair. Colorism adds to the issues Maddie has already overcome as young woman dressed in Pan African colors, in “Time Travel.”

White women remain at the center of the Arlingtons’ marital conflict. Vel’s initial assertiveness does little to confront her husband’s infidelity in a healthy way. Instead, she uploads her anger on her daughter with physical and verbal abuse. Phil’s PhD in Psychology is useless when facing Maddie’s now obvious signs of trauma. He has turned into an alcoholic philander, inconsiderate of his wife’s dignity and his own daughter’s sensibilities.

Toni Ann Johnson neither romanticizes nor victimizes the Arlingtons as a symbol of the Black American family. Phil and Velma are round characters facing more than the dehumanization of racism, which informs the multigenerational trauma running through their broken home. Maddie represents hope for the future, “where love is the only feeling left once enough time has passed.” Reading Light Skin Gone to Waste will remain with us as a multilayered experience and an exquisite example of the art of contemporary American short fiction.