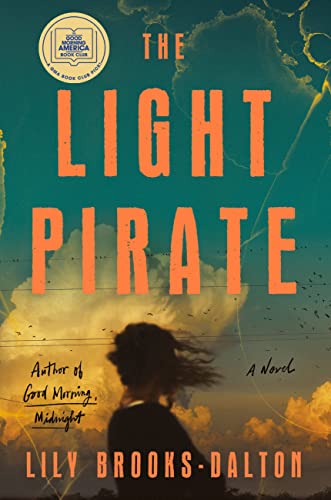 “the world of this novel is unforgettable.”

Divided into four parts, this novel begins simmering with the discontent of a disintegrating family and by extension, a world so off-balance, it’s clearly headed for catastrophe.

Kirby Lowe, an electrical line worker living in a small town in Florida, defiantly refuses to evacuate during a dangerous hurricane. Wanda imminently threatens, but Kirby has seen these storms all his life and feels prepared and invincible. Full of the hubris of a male peacock preening, Kirby takes on the protection of his newly wed, fully pregnant wife, Frida, and his two preteen sons, oblivious to what even the reader knows is disaster. As he busies himself with sandbags and storm windows, certain that the weather will touch down “away,” Frida prepares meals for Kirby’s sons from his previously failed marriage, knowing they resent her around.

Called to repair fallen hydro lines in a grid system so broken down that only patchwork is keeping it together, Kirby leaves in his truck to do the dangerous electrical repair work as the storm builds. It falls to Frida to look after her cranky stepsons. As she contemplates the danger they’re in, as she feels her unborn baby kick, the boys slip outside into the whipping wind, pelting rain and flying debris. Before Kirby can get back, the boys go missing, the baby is born,  and the “hurricane takes what yields. Nothing more, nothing less.”

The first section is titled Power. Brooks-Dalton describes the world of Florida under storm siege and the fury of weather unleashed: atmospheric changes, smells and roaring sights and sounds, complete with a well-prepped survivalist character, battened down for the duration. It’s a glimpse of the world in which we live now, after the last storm but before the winds of irrevocable change lift and scatter our climate-changed lives.

In the next section, Water, ten years have gone by and the family of three eat from plastic deli containers around a citronella candle, as if camping in their own home. Already an empty Miami-Dade county is being further abandoned by its governor, and the homes of the rich have fallen into the sea. There is a place called The Edge, where the tide bites at what is left of the land. Wanda, who was named after the worse hurricane ever, the one that brought her into the world, is ten. In the short years following, the state of Florida has all but been deserted and Brooks-Dalton shows readers the many examples of the new, decaying world that we have to look forward to, should “we” continue on this insane trajectory: long corridors of empty grocery stores, municipal buildings devoid of staff, empty houses with rotting furniture, schools without teachers, plants and trees digging into the soggy earth. This section captures a moment of knowing.

“Kirby . . . realizes that he’s known for weeks. Months, even. It was the same with the beaches. The same with the floods, the hurricanes, the sea level. Didn’t he know all of this was coming? Didn’t everyone? They’ve known for years. Decades. . . . They had all hung their hats on the question of proximity. Yes, it will be bad, they’d said to one another, but we have years. We have time. Somehow, we’ll solve this along the way.”

In the part called Light, several decades have passed and the landscape has unraveled irrevocably. Wanda survives alone, adept at living in and around the swamps. Military passenger trucks have collected refugees who stayed behind too long and “returned” them north. Cell towers in disrepair have been left to fail, and ultimately the entire state is cut off from the rest of North America. Wanda’s brother says prior to leaving: “I see what you mean, now, about it getting worse out there. . . It’s just going to be Florida all over again. Slower, maybe. Or faster, who knows. It’s not like one is better than the other when it’s all headed down the same road.”

The last section is titled Time.

The Light Pirate explores a sense of belonging to a place and an era, scaffolded by hubris and denial. The hubris of ownership and dominance. The denial required to maintain the status quo. Hubris in the face of the unpredictable forces of nature. Denial in clinging to the old idea of existence. The Light Pirate challenges any ideas we have about going back to normal. It’s already too late. In the aftermath of the destruction of all we have already lost on the planet, of all we are losing, this layered, suspenseful and imaginative story haunts.

But there is a luminescence here, a force that takes on a quality of the intelligence of the universe. In the glow of that light, hope and exhilaration bloom. And in these moments before the new, violent storm hits its readers, the world of this novel is unforgettable.