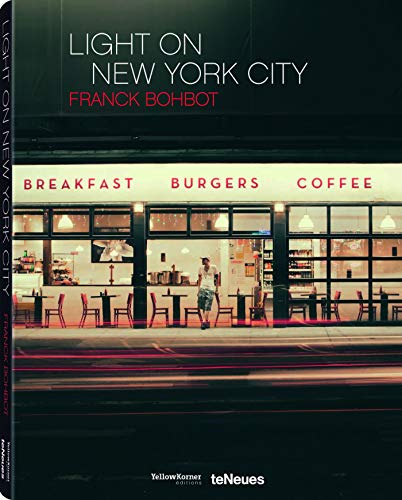 Franck Bohbot’s color photography in Light on New York City captures the iconic and not so-iconic places in New York City at night. Largely devoid of a human presence, the City reflects a tranquility at night that is very different from the sunlit, crowded, hustled, and harried pace of daytime work hours. The nighttime images engage and sparkle with the glory of neon typography, late night coffee shops, pizza parlors, and the glow of theater marquees illuminating grand solitary entrances.

Bohbot’s photography records the exteriors, entrances, and store fronts of the “city that never sleeps” and give it its special quality. Places such as the Blue Note Jazz Club, the arch of Washington Square Park, Katz’s Delicatessen of When Harry Met Sally fame, Nathan’s in Coney Island, the Cinema Village in Greenwich Village, and the soon-to-vanish Carnegie Deli.

That Bohbot is newly arrived in New York City is indicated by his fascination with what many residents take for granted. He brings fresh eyes to very familiar surroundings and lets us see them in a new way.

His color nighttime photography relies on the ambient illumination of street lamps and actual lit signage without any attempt to “beautify” or glamorize through additional lighting. It is an admirable sensibility. Bohbot’s tour of New York City’s nooks and grand places puts the viewer there, on the street, to see it for yourself. Exteriors of the old and new, the glamorous and the worn, the grand and the sordid are shown side by side without preference. All get equal billing. He is drawn to the ambiance of a place—it’s poetic mood, architecture, typography, and lighting—to tell its story.

Although the technical aspects of cameras and formats or whether the photographer works with digital or film are unspecified, Bohbot does subtly stylize the color rendition of his images. Sometimes it is with a slight green or blue undertone or by giving them an overall warm color.

Bohbot’s vision shares a kinship with another native of France, Eugène Atget, who documented the streets of Paris at the turn of the 20th century. Perhaps in 100 years people will look at Bohbot’s photographs of New York City and applaud that he captured its facades and streets, and celebrated the essence of its night in the 21st century.

Franck Bohbot’s Light on New York City is a large 10 x 13 inch book, beautifully printed on heavy weight semi-gloss paper, and a delight to view. If you appreciate New York City “warts-and-all” as they say, you will love this book.