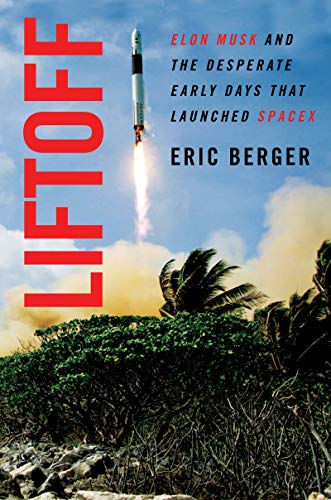 “Berger does a great job here of not only profiling SpaceX, but also capturing the total brinksmanship of its swashbuckling founder.”

Lots of kids played with toy rockets. But very few grow up to found cutting-edge rocket companies, and still fewer do that while simultaneously running the most successful auto company launched since the 1920s. And there’s a solar company, too, and another one that bores tunnels.

Eric Berger’s Liftoff focuses on the early days of SpaceX, a smart choice, since it offers a vivid window into Elon Musk’s brinksmanship. Just as he has done with Tesla, Musk repeatedly made big bets, risky ones that could have taken his entire fortune. Even employees who sometimes got caught up in his hard-driving management style admired Musk’s willingness to get into the trenches with his troops and his ability to see a few moves ahead.

The early SpaceX story is perhaps not as well known as the oft-told tale of Tesla’s founding. Berger chooses to do his reporting through the lens of SpaceX insiders, whose lives are sketched in capsule biographies. Some (perhaps most) have since moved on, but few appear bitter about being married to their jobs for years on end. It was exciting, and it was important, they say. “Failure was an option at SpaceX,” Berger writes, “partly because the boss often asked the impossible of his team.” Time after time, they delivered.

Berger does a good job of sketching the cozy world of rocket science until it was disrupted by SpaceX circa 2002. NASA and the military used big-ticket defense contractors and tolerated extremely relaxed schedules and huge cost overruns. It was common to use old Russian rockets when nothing else was available. None of the old guard thought SpaceX would succeed, because many startups failed in a business where multimillion-dollar launches frequently go awry.

The early history of SpaceX (and Tesla, too) mostly affirmed the naysayers. The launches of the nascent Falcon 1 rocket (on isolated Kwajalein Island in the South Pacific) failed—three times. On the third one, changing a single number in the rocket’s software would have prevented an arcane problem from bringing it down.

If Elon Musk wasn’t Elon Musk, there would not have been a fourth launch. He was running through what remained of his fortune with no return. Both SpaceX and Tesla had huge burn rates during a recession. Musk’s first marriage had just broken up, and his son died from SIDS. “He’d tried to change the world, and the world resisted,” Berger writes. But Musk didn’t shut the company down—he called the staff together and gave them six weeks to go back to the island and try again. “His employees realized they were playing for everything,” reads Liftoff. “If the final rocket launched safely into orbit, the company would have a chance to survive.”

Did that launch go smoothly? Not at all. In a scene that could and probably will be seen in a movie someday, the team hadn’t accounted for what changes in air pressurization would do to the rocket as it was transported via military C-17 from California to Kwajalein. “They heard a loud, terrible, popping sound”—and it was the rocket imploding at 25,000 feet. To save it, young SpaceX wunderkind Zach Dunn had to crawl inside the crumpling rocket with a wrench to open a large pressurization line. “If the rocket starts to blow, pull me out,” he said, before saving the day like Mighty Mouse.

After this, there’s a frantic effort to fix the damaged rocket and get it on the launch pad in an insane time frame. Fly or die. And on September 29, 2008, the launch achieved orbit and released its satellite payload. It was the first privately funded, liquid-fueled rocket to reach orbit. Musk said it “was one of the greatest days of my life.” By the spring of 2012, SpaceX had 40 space missions under contract.

There is more drama as SpaceX struggles to achieve another seemingly impossible task—getting the rockets to land back on their pads instead of ditching at sea. That eventually works, too, saving millions. SpaceX became the affordable choice for getting satellites into orbit. The company is now worth $74 billion.

The book ends with where-are-they-now portraits of the men and women who made early SpaceX happen. “I gave everything I had, to the exclusion of girlfriends or anything,” says Dunn. Gwynne Shotwell, who went from selling rides on SpaceX rockets to running the company as president, offers a cogent insight into Musk’s thought processes: “He looks at a problem and his reaction isn’t ‘Oh that’s a shame.’ His reaction is to go fix it. He’s extraordinary.”

Musk developed heavier rockets (always part of his vision) and wants to get to Mars, but for the most part that’s another story. Berger does a great job here of not only profiling SpaceX, but also capturing the total brinksmanship of its swashbuckling founder.