Lifeblood: How to Change the World One Dead Mosquito at a Time 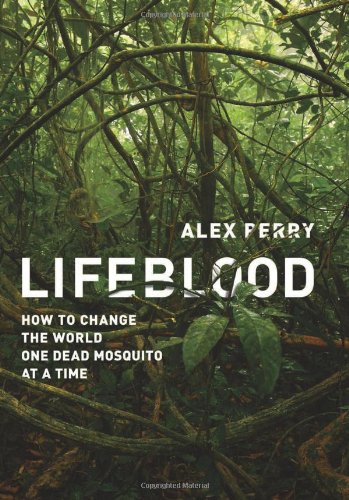 “In order to dramatically illustrate the effectiveness of the malaria campaign, Mr. Perry began and ended the book with visits to ‘the most malarious places on earth.’ The contrast could not be greater. Prior to the campaign, the streets of Apac were deserted and businesses shuttered. The hospital appeared totally ill equipped to confront the disease. After the campaign, the streets were packed with people, hotels were full, and businesses were a hubbub of activity.”

With engaging and refreshingly clear prose, Alex Perry in Lifeblood describes a successful campaign against an ancient scourge of mankind: malaria. The campaign’s successes point the way to a new and more effective way of administering aid based on business models. The campaign also illustrated that as malaria began to be defeated, Africa’s economy was also free to develop, and the governments started to show a new degree of self-sufficiency.

Mr. Perry begins with a scientific background of the malaria parasite, how it spread throughout most of the world, and how all this has been interconnected with human history. Although the means for controlling malaria had been known for over a century, it remained a major disease affecting half the planet and killing close to a million people a year.

Mr. Perry makes it clear that the problem of malaria control is now more political than science. He described in engaging detail how inept and efficient aids programs rarely met their goals. Often aid workers used the opportunity to advance their careers and to fund their first-world lifestyles. Aid programs were not held accountable for their results, and it was in their interest to foster a sense of continuing crisis. Other organizations were no better in helping solve the malaria problem.

Corrupt African government officials were more interested in personal gain than helping their subjects, and foreign mining and oil extraction companies could not see how helping the communities would improve their bottom line.

Lifeblood profiles Ray Chambers, who brought the aid community, businesses, religious groups, and government leaders together to run a highly effective malaria campaign. Chambers made millions as an entrepreneur and pioneer of the leveraged buyout. Realizing that money did not bring happiness, Chambers turned to philanthropy. Along the way, Chambers developed a unique set of skills that proved very effective in aid work. He played political leadership, business leadership, and the press against each other to multiply their effect. He convinced the organizations that is was in their best self-interest to fund aid programs.

In 2000, the United Nations adopted the Millennium Development Goals, which set minimum standards for poverty alleviation and health. Looking for good causes to expand his philanthropy work internationally, Chambers worked with the economist, Jeffrey Sachs, to see how they could implement the goals. As Chambers looked into the program, he saw that malaria was an issue that came up continuously.

In 2005, President Bush needed a program to prop up his badly tarnished image. The President’s Malaria Initiative was the result. Soon thereafter, Chambers used his political skills to help convene a White House summit on malaria. Six hundred guests from aid, development, and business mingled and committed themselves to fighting malaria.

Although Chambers founded Malaria No More in 2006, he realized he needed to be part of a larger organization in order to accomplish his ambitious goals in malaria eradication. So in February 2008, he was appointed UN special envoy for malaria by Secretary-General Ban Ki-Moon. His first goal was very ambitious: to distribute bed nets to everyone in the world by the end of 2010, a time frame of just two and a half years. Chambers later decided to focus on just seven African countries that accounted for 2/3 of all malaria cases in the world. Even this more modest goal required that 300 million bed nets would have to be hand-delivered to some very inaccessible regions.

There were other important players in campaigns to defeat malaria. Stephen Philips of Exxon Mobil convinced management that controlling malaria was good for the bottom line, not just for social responsibility. Less malaria among workers and people in the community meant less lost work time and expenses in treatments. The mining giant AngloGold Ashanti became convinced that malaria was the most significant health threat to their operations, so assigned Steve Knowles to implement a program to defeat the disease.

In spite of daunting challenges, Chambers accomplished most of the goals of the campaign. In addition to applying business acumen and efficiency to the campaign, Chambers enlisted the larger world outside of aid to include people from government, religion, sports, entertainment, and science. The campaign was fraught with continuing crises in funding, cajoling African political and religious leaders, and delivery of nets in a forbidding landscape.

The end of the campaign was largely muted in spite of the successes. Chambers was preoccupied with the sustainability of the campaign. The project would have to be turned over to African leaders. The future of Africa was beginning to improve with increasing investment and a new independent spirit. Chambers helped create the African Leaders Malaria Alliance to further the spirit of self-determination. Aware of Chamber’s successes, the aids community is increasingly adopting his business methods. Even governments providing aid are beginning to demand accountability and value for taxpayer dollars.

In order to dramatically illustrate the effectiveness of the malaria campaign, Mr. Perry began and ended the book with visits to “the most malarious places on earth.” The contrast could not be greater. Prior to the campaign, the streets of Apac were deserted and businesses shuttered. The hospital appeared totally ill equipped to confront the disease. After the campaign, the streets were packed with people, hotels were full, and businesses were a hubbub of activity.