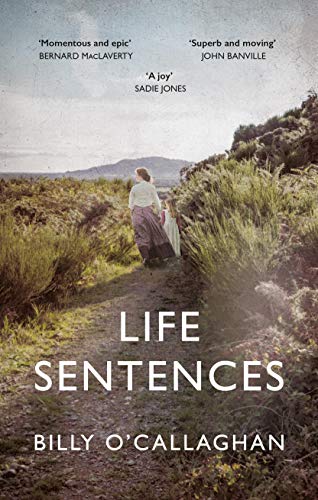 “Written with harrowing intimacy in cadence and phrasing so poetically elegant as to be breathtaking, it sings of perseverance in the face of adversity . . .”

A thoroughly realized treatise on the familial ramifications that haunt us, the beauty in Life Sentences comes from Billy O’Callaghan’s deep-probing gift for nuance. Wielding confessional monologues, O’Callaghan unfurls an epic story woven in three compelling parts that could justifiably stand-alone, yet from the sturdy threads of O’Callaghan’s deft crafting, the reader is invested from the start in this multi-generational story.

It is 1920, in the village of Douglas, three miles from Cork City, and war veteran Jeremiah Martin, has been in Barrett’s pub since six, “drinking fast and heavy.” Though friends of Jer’s from childhood, the local authorities enter in search of him, wary of what he might do to avenge the death of his beloved sister. In his cups, Jer spouts grievances, and given Jer’s state of mind, the guards conclude “the cell is all right for the night.”

In his confinement, Jer ponders what ails him and thinks, “Life has given me what it’s given to most people I’ve known: occasional spans of calm that serve only to connect and intensify the turmoil. The shades might differ, but that is all.” Beautiful, lyrical stream of consciousness ensues as Jer reminisces about the bad luck and hard times of his mother, Nancy Martin, the only famine survivor in her family on the cloistered, western island of Clear, who scavenges work as a domestic maid on the mainland, and whose life was sadly defined by being an impoverished, unwed mother.

Of his mother’s unrequited devotion to his father, whom he only met a few times, Jer says, “The heart wants what it wants, I suppose, and, as far as I knew she never again looked at another man. Not that they’d have been lining up for her, and she a woman so far fallen.” Jer continues, “We’re all laden with sin, but the shame shows differently on some of us than on others.”

Reminiscing on the night his family heard of the passing of his estranged father, the disreputable Michael Egan, Jer’s mother sings a lamenting air in Irish and gives voice to her re-opened wound uncharacteristically. Jer confides, “My mother opened up about her life rarely, and never that I can recall in such a free way as this. As she spoke I had the sense that she was holding her past close enough to line up all her dead.”

It is 1911, and Jer’s mother, Nancy, recounts her never before shared story. “I have known happiness,” she says, “because a life is never just one thing, and while it might not amount to much when my time is considered as a whole, it remains significant for me.” Nancy falls low due to Michael Egan’s persistent charms and her provincial innocence, in a time when unwed mothers were social pariahs. Abandoned by the shiftless Egan, her lack of opportunity for advancement as a single mother leads her to dire circumstances in the streets of Cork City. Years later, when Egan re-emerges in her life as a family man, she learns the same lesson from him twice and, without recourse, moves herself and her, now, two illegitimate children to the last-ditch resource of an Irish workhouse. They are desperate times in hopeless circumstances, and Nancy struggles to do right by her children, ultimately bettering their circumstances, but only just, when she finds work in the local woolen mills and rents a two-room cottage in East Douglas.

It is 1982 and Jer’s daughter, 64-year-old widowed Nellie, is dying in the home she shares with her daughter and son-in-law. She says of her life: “It might not have been the life I’d have wished for as a girl, but we hold on to what happiness we find. And now, with my end in sight, and the clock shedding its hours and days faster than I can count, I’ve come to understand that there’s peace in acceptance.”

Nellie reflects, “At any given moment I can close my eyes and find again how I’ve been at my happiness, or I can find in that same blackness my old ghosts waiting.” Foremost on Nellie’s mind is the death of her newborn, and the dark night she rises from her bed, broken and feeble, to accompany her father and husband down the Churchyard Lane road to Douglas’ cemetery, where they illegally bury her son in “an old forwards-tipping hawthorn ground already packed with the bones of my grandmother, my mother, and my brother.”

Life Sentences is a story heavy with nostalgia and the sad beauty of stoicism it takes to accept one’s lot in life. Written with harrowing intimacy in cadence and phrasing so poetically elegant as to be breathtaking, it sings of perseverance in the face of adversity and lays bare the anchoring dignity found in the pride of a family line.