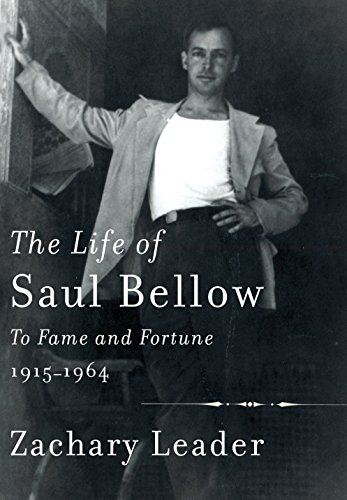 “The high point of The Life of Saul Bellow is the use of illustrations.”

Zachary Leader’s The Life of Saul Bellow is a typical literary biography: detailed, earnest, well researched, exhaustive, self-important, and dull. How do you take a vibrant, compelling story and turn it into an assembly line of names, dates, and self-evident interpretations? Give the job to an academic.

Leader’s work conveys a thorough knowledge of the subject and is presented in a workmanlike style. There is far too much clutter, however. There are too many quotations and citations clogging what should be, but never quite is, Leader’s book. Whatever he might have had to say for himself is obscured by 10,000 schoolboy notecards. The book, as a result, only belongs to the sources.

Leader needs to learn how to synthesize and extrapolate more, how to summarize and, ultimately, to write. As it stands, The Life of Saul Bellow is an exercise in stamina, for reader and writer alike. The leading question should be Who is Saul Bellow?, yet it becomes How much notecard data can I shoehorn into this sentence?

The reader is constantly tripping over research and direct quotation—measured by the square foot rather than by quality or effectiveness—which wrong-foots the book’s rhythm, sense, clarity, and the pleasure of its reading. These obstacles are like running the high hurdles. For a marathon.

A representative, randomly chosen example can be found on page 595, at the 18-mile mark of the text. The first complete paragraph begins with a quotation. There is also, embedded within this sentence, a bibliographic aside (in parentheses). The next sext sentence is crammed with two quotations. The prose is a meat freezer packed udder-to-udder with steaks. The third sentence is all quotation. The author is not hiding behind the curtains so much as he’s absconded to Katmandu. It’s like a dinner party where everyone speaks at once and no one listens to what anyone else is saying. We’re halfway down the page, but Leader has added almost nothing of his own except tag lines. The ensuing sentences bring more of the same. Facts, figures, paraphrase, and always quotes quotes quotes. What’s the point? This is a typing exercise, not a book. Where is the joy of reading and writing? Where is Leader? One thing’s for certain: his surname is no aptronym.

Leader should have come to the point much more quickly. His 832-page Life of Saul Bellow could be replaced with a Timeline, Bibliography, and Note About the Typeface because that’s all it really amounts to. It’s not much worse than the typical literary biography, which is so often a disappointment, the substance and style submerged beneath 20,000 leagues of borrowed information, but even by these paltry standards Leader’s work is rather bleak.

A related issue is Leader’s excessive use, and misuse, of direct quotation, especially in the case of innocuous stock phrases. Referring to the red beard of Saul Bellow’s grandfather, Leader quotes Bellow’s son. He had a red-flecked beard “‘like all the men in our family.’” This should have been paraphrased. Direct quotation is reserved for ideas that are especially well phrased in the original and could not be bettered by paraphrase or in which the particular wording is of great importance. Like all the men in our family quite clearly fails to meet any of these standards. Unfortunately, this annoying discursive tic is repeated on practically every page of the text, suggesting that the author is either unwilling or unable to convert the raw material into his own language.

Leader’s book also suffers greatly from an obsessive tendency to insert quotations from Bellow’s fiction as asides into biographical discussions. This leads to long, unwieldy, confusing sentences that leave one breathless, in a bad sense, and make the ideas hard to follow. Consider the following behemoth:

“His movements were compact and precise, he was handsome, well dressed, a dude (‘Papa was, he still is, such a dude,’ declares the narrator of Bellow’s 1987 novel, More Die of Heartbreak, ‘and I resemble him, inevitably’; ‘I’ve noticed,’ says Ravelstein to Chick, in Ravelstein [2000], ‘that since your marriage your dress standards have dropped. You once were something of a dude’).”

This reads like a parody of bad, inordinately sub-referential prose, or like a David Foster Wallace story. The “says Ravelstein . . . in Ravelstein” is especially awkward. To be honest, though, this is not by any means the worst example in Leader’s book. This unpleasant habit is, moreover, quite unnecessary. We get it. Bellow, like every writer since the dawn of time, uses real-life details in his work. The compulsive reminders are gratuitous.

The high point of The Life of Saul Bellow is the use of illustrations. Leader has chosen superb photographs to adorn his biography. The quality, quantity, novelty and diversity of images is impeccable. Thankfully, he avoids the overused photograph of a smiling, white-haired, jovial, older Bellow as the cover image. Instead, he chooses the startling photograph of a young, rakish, strutting Bellow with a hand on his hip, looking like a cross between Picasso, Gene Kelly, and Mae West.

Leader is expected to turn out a second volume of this biography. Let’s hope the next installment is just as rich in visual images. Let’s also hope the book is less exhaustive, less exhausting, and more of a statement from the author himself.