Life on the Mississippi: An Epic American Adventure 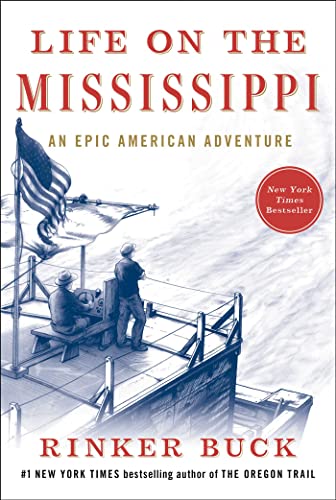 “The Flatboat Patience’s colorful come-and-go crew of cosplaying and pedantic historical re-enactors, a gadget-head food-snob galley chef, and alternately doomsaying and day-saving riverside locals—as well as Rinker Buck’s own free-flowing crash course in flatboat piloting and American history—turn Life on the Mississippi into the riveting, revealing, and often side-splitting saga that Oregon Trail fans would expect it to be.”

Toward the end of Rinker Buck’s new expedition memoir, Life on the Mississippi, Buck admits to an uncommonly low “threshold for boredom” that leads him into grand and foolhardy journeys into the unknown to gain new experience and test his mettle. To readers of Buck’s earlier chronicles of aerial and overland cross-country adventures, Flight of Passage (1997) and the PEN award-winning The Oregon Trail (2015), Buck’s confession of insatiable wanderlust will come as no surprise. Even readers of his absorbing and affecting memoir First Job will recall Buck’s penchant for bluffing and blustering his way into comically unsettling situations just for the chance to experience something hitherto unknown.

But Rinker Buck is no garden-variety adrenaline junkie, nor is he a swashbuckling adventure writer in the Richard Halliburton mold. He does share Halliburton’s boundless curiosity, though, which explains much about what made the bestselling The Oregon Trail so enthralling. And so it is with Life on the Mississippi, which launches Buck on a Huck Finn-like excursion over several hundred of miles of the Ohio and Mississippi rivers in a custom-built 1820s-style wooden flatboat.

Much of Buck’s thirst for new knowledge takes on an idiosyncratic form that probably wouldn’t have played well with the majority of Halliburton’s readers. Well into his sixties, Buck still manages to live up to the collegiate nickname he revealed in First Job: “book turd,” an affectionate variation on “book nerd.”

As in The Oregon Trail, joining Buck on a rugged adventure in a historically significant but primitive and long-outmoded mode of transportation in Life on the Mississippi also means spending equal time absorbing the key points of every relevant first-hand account and secondary source he consumed as he geared up for the trip or indulged in local library jaunts along the way. Time and again, this adventurer’s narrative becomes a book about books, as stories told by the original flatboat migrants whose steps Buck is retracing are woven into the book’s narrative, often taking center stage and appearing as recurring characters in the story.

Buck makes a strong case for the dimly remembered flatboat (eventually succeeded and supplanted by the far better-known steamboat) as a key player in America’s western expansion and economic growth. He describes inland rivers like the Monongahela, Ohio, and Mississippi as “America’s first western frontier.” He cites early flatboat captains like Jacob Yoder—whose river travels Buck recreates in his journey from Pittsburgh to New Orleans—as pioneers who “unleashed a transportation revolution that opened America to the world. . . . The success of flatboat routes to world markets through New Orleans triggered the explosive growth of steamboat traffic after the 1830s, and by the Civil War more than four thousand miles of canals had been built, integrating the rivers, tributaries, and man-made waterways into a diverse and flexible cargo delivery system that supported America’s industrial revolution and the vast expansion of its agricultural economy in the 19th century.”

Like much river travel itself, Life on the Mississippi gets off to a fairly slow start, focusing initially on America’s flatboat history as Buck chronicles the first-time exposure to it that impelled him to undertake the trip. As in The Oregon Trail, it’s not until we start to see Life on the Mississippi’s contemporary cast start to take shape that the narrative flow picks up. In a similar way, the sibling rancor and riotous humor of Buck and his travel partner, his brother Nick, brought The Oregon Trail and the journey it recounted roaringly to life.

In Life on the Mississippi, Buck retains his signature gift for enlisting indispensable and often uniquely irritating traveling companions and turning their often prickly interactions into rollicking good reading. The Flatboat Patience’s colorful come-and-go crew of cosplaying and pedantic historical re-enactors, a gadget-head food-snob galley chef, and alternately doomsaying and day-saving riverside locals—as well as Rinker Buck’s free-flowing crash course in flatboat piloting and American history—turn Life on the Mississippi into the riveting, revealing, and often side-splitting saga that Oregon Trail fans would expect it to be.

Life on the Mississippi is also to some degree a family memoir of a much different sort than The Oregon Trail or Flight of Passage (in which two teenage Buck brothers fly across the country in a single-engine Piper Cub in 1966, the youngest duo ever to do so). Prior to his flatboat adventure, Buck spends what he describes as the best 18 months of his life caring for his dying mother at her home in Damariscotta, Maine. During this time he comes to recognize her as two completely different people: the full-time-and-then-some Roman Catholic mother who married young in the 1950s and raised 11 children, and the “gray-hair on fire” who reclaimed her life in her last 30 years as an “independent, free-thinking person,” and was, by her final days, managing to stay alive through “gumption and humor.”

Dogged throughout his ensuing flatboat journey by guilt-ridden dreams and incessant reflections on his mother, their relationship, her sacrifices, and the distinct phases of her life, Buck realizes, “Slowly coming to terms with that, and missing her, was as much a part of my trip to New Orleans as learning how to play the sandbars or scrambling over the levees with the electric bike to run for fuel.”

Just as it details a physical excursion into the geographical heart of America, Life on the Mississippi also documents Buck’s unspooling investigation of the country’s checkered past and complex present, with well-chosen historians like Edward E. Baptist, Richard Slotkin, and David S. Reynolds as his Virgilian expert guides.

Along the way Buck’s ever-expansive beginner’s mind enables him to recognize and absorb histories hidden and still-evident, where he finds not just evidence of bold American adventuring and economic innovation but also the “other America created by the flatboat era” and the southwest conquest it enabled: the intertwined legacies of genocide, Native American removal, and Black enslavement. These range from the sanitized signposts of the Trail of Tears in Kentucky and Tennessee (“textbook landscapes that showcase the National Park Service’s undeniable skills at presentation”) to the comparatively promising work-in-progress representation of the brutal slave markets of Natchez, Mississippi, destination of thousands of enslaved people’s dreaded down-the-river journey.

“Obsessing on the flatboat era had delivered me to the hidden history of my country, the truths that for too long too many feared to teach,” Buck writes. “Natchez was a miniature of a more troubled America, a more iniquitous America, than the country I was raised to love. But the truth about our past is also the truth about our present and I was reckoning with the America that is.”