Life of a Klansman: A Family History in White Supremacy 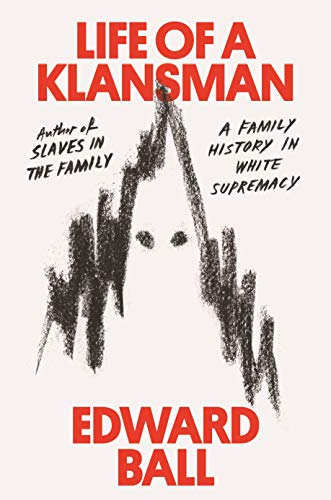 “Life of a Klansman is . . . an American story empowered by our original sin of slavery. It resonates across the years to the violence of modern white supremacy, a 19th century legacy that continues to prosper in the Trump era.”

In spring of 1868 a new musical revue A Fresh Bouquet of June Flowers opened to good reviews in New Orleans. The Commercial Bulletin called it a “New Sardonic, Sensational, Musical Mysticism.” Featured in some of the lively numbers were characters belonging to a growing fraternal organization: the Ku Klux Klan.

It’s an unsettling moment in a book full of unsettling moments. Edward Ball’s Life of a Klansman: A Family History in White Supremacy is a recounting of the Klan’s genesis as viewed through the prism of the author’s family history. At the center of this story is Polycarpe Constant Hypolite Lecorgne, Ball’s great-great grandfather on his mother’s side and a proud member of the Invisible Empire of the South, as the Klan was sometimes called. Lecorgne’s biography is recounted with directness, a strong sense of shame, and Ball’s compelling need to scrutinize the ugly truth of his ancestry.

Ball explored similar territory in Slaves in the Family, his National Book Award winning investigation of slaveholding ancestors on his father’s side. For that powerful work, Ball tracked down descendants of people owned by his family.

Life of a Klansman is a different look at the subjugation of African Americans in the 19th century, this time in the postbellum era. After the death of Ball’s great-aunt Maude, Lecorgne’s great-granddaughter, Ball was given Maude’s family files, which amount to a life narration of the man she called “a Redeemer because he helped to end Reconstruction.” Ball tries to make sense of his great-great-grandfather’s life and the legacy of the racism Lecorgne promulgated.

Lecorgne was born in April of 1832, son of Yves and Marguerite Lecorgne. He is fortunate to survive childhood; four older siblings died before reaching age five. Their New Orleans neighborhood is a blend of whites, free blacks, and Creoles both black and white. There are also a variety of mixed families, with strict designations that depend on the racial makeup of the parents. It is an era where respected “science” teaches that Caucasians are fundamentally superior to all other races. The Civil War upends this social structure with the Emancipation Proclamation and the psychological weapon against Southern sensibilities through the use of all-Black regiments by the Union Army.

Lecorgne becomes a carpenter, starts a family of his own, and joins a Confederate battalion after the Civil War breaks out. Ball notes Lecorgne is appointed as a captain when he joins the military but is busted down to second lieutenant for unknown reasons. Failure, Ball writes, is a pattern in Lecorgne’s life. “He is not a leader, but a follower.”

And a man ripe for recruitment into what was then known as the Ku Klux (the final K was a later addition). Lecorgne enlists in his local branch of the organization, an eager participant in the terrorism of the Reconstructionist south.

Ball’s style is compelling. He writes in present tense, imagining his way into what his great-great-grandfather must have experienced. The reader often sees the world through Lecorgne’s eyes. This literary technique doesn’t portray Lecorgne as pitiful victim of his times but instead gets readers into the man’s head, unnerving as that is. Ball writes without flinching. He acknowledges that Lecorgne was driven in part by a determination to protect his family and its future generations for what he saw as a just cause: the natural superiority of the white race. It is a bloody fight, driven by blind hatred and culminating in murderous action. “I am an heir to Constant’s acts of terror,” writes Ball “I do not deny it, and the bitter truth makes me sick at the stomach.”

Two moments in the book consider this terrible inheritance in what feels like a penance for his great-great-grandfather’s actions. Ball sits down with three African American women, descendants of a man who survived an epic KKK massacre in which Lecorgne was probably involved.

In another poignant moment, Ball meets Mark Roudanet, a white man who has only recently learned that he is a descendent of a light-skinned Black Creole who decided it was safer to pass for white rather than risk death at the hands of the KKK. After his father died Roudanet went through his father’s papers and discovered the buried secret. Skin hue was the family’s ironic saving grace. “I am definitely affected by (racism),” Roudanet tells Ball, “but I mean, I am not harmed by it.”

Life of a Klansman is—for better and for worse—an American story empowered by our original sin of slavery. It resonates across the years to the violence of modern white supremacy, a 19th century legacy that continues to prosper in the Trump era.