Life Is a Gift: The Zen of Bennett 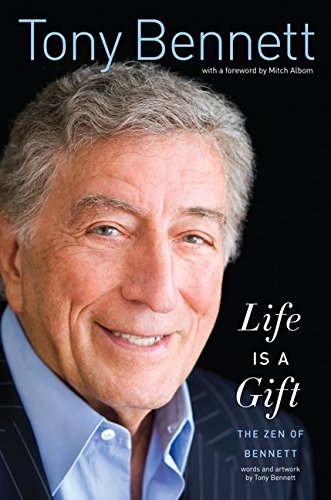 Midway through his new memoir, Life Is a Gift, singer/painter/icon Tony Bennett presents his readers with an “old Chinese proverb:”

“If you want to learn something, go to someone older than you, because they’ve lived longer.”

Which suggests that it might be prudent for all those 85 and younger to pay strict attention to the author, who after more than six decades in the music industry certainly knows a thing or two about lessons learned.

As author Mitch Albom puts it in his introduction by way of explaining the book’s subtitle:

“If there is, as the subtitle of this books suggests, a Zen of Tony Bennett, it is surely that: a philosophy of life so pure and honest that it can smile when it hears itself sung back. How many of us can say that? How many of us cringe at a recording of our own voices, or when we see ourselves on video, or when we think about how we acted yesterday or last year?

“No, the reason for Bennett’s serene look—on that day in the concert hall, or any night he’s onstage, or holding a brush in front of a canvas, or gazing out his window overlooking Central Park—is that he’s doing what he wants to do, the way he wants to do it. He makes art. He makes friends. He gives away. He owns very little.

“The word Zen is tied into enlightenment. First you seek it, then you share it.

“The Zen of Tony Bennett is that he’s still doing both.”

Even Mr. Bennett’s idea of a memoir is fully Zenned. Instead of the usual structure for these things, alpha to omega or A-to-Z, the author has opted instead of present his life lessons in the form of individual essays on topics ranging from “War is Insanity,” to “Fame on the Brain” to his consideration of the power of friendship, proper involvement, in which he writes a particular moment in his relationship with Fred Astaire, one in which he spies upon the dancer as he, Bennett, approaches his own art studio on foot:

“As I came back down to the studio, I happened to glance into the pool house window. There was Astaire, dancing just as he did in any one of his major films, to the tune on the radio. When I opened the door to the studio, he turned red in the face, and was so embarrassed that I’d caught him. ‘I just can’t help it, Tony,” he said. “Whenever I hear the right beat, I just have to dance.’ Astaire got caught up in the music and was doing these moves that most twenty-year-old kids couldn’t pull off. That was one of the many instances where it became clear to me that age really has nothing to do with anything; it’s all about your attitude and your love for what you do. Astaire’s energy and artistry will stay with me for the rest of my life.”

As Mr. Bennett obviously is, himself, an exemplar of the fact that “age has nothing to do with anything.”

Which brings us back to that old Chinese proverb.

Along with his memories, the author has aphorisms aplenty to share as well. Located at the end of each essay like questions for study group discussion, these bite-sized bits of wisdom include:

It’s good to accept challenges. Never let people put you in a box.

This too shall pass. Even in the lowest times, realize that things will get better.

No man is an island; you can’t go it alone. Friends are there to celebrate good times with you, and to help you through the dark times.

Have faith that at some point you can achieve the art of excellence—or at least come as close as possible.

When the uncreative tell the creative what to do, it stops becoming art.

It takes ten years to learn how to walk out on stage.

Try to do the unexpected, so people are never bored.

Mr. Bennett is perhaps at his best when he writes about the old days in Astoria, Queens, and about his large, immigrant family, his mother and brother, and his childhood. As here:

“Throughout my life, I’ve run into much criticism and many obstacles that could have made me give up following my dreams. There was a lot of pressure from some of my family members; when I first started performing, they even called me a gigolo. They said, ‘Why don’t you get a regular job and help your mother; she is working so hard.’ But I always wanted to work at something I loved. I realized that I had to follow my passion and bliss, and take what others said with a grain of salt, in order to live my dream and do what I was good at.

Tony Bennett also has a wealth of material based on his friendships with the rich and famous. He tells that of all the presidents that he has sung for, the most approachable and most musical as well was Bill Clinton.

He reports that it was Liberace, of all people, who first made the leap from performing in concert halls to playing arenas like Madison Square Garden, changing the music business forever.

And he reveals that it was comedian Bob Hope who shortened his name from Anthony Dominick Benedetto (Benedetto meaning, “the blessed one”) to Tony Bennett so that it could fit on a marquee.

About the comic, the author also remembers:

“Bob Hope told me to make sure to show everybody in the audience that you love them, and that you love to perform for them. Not for the money, not for the fame, but for the love of the work and for the love of the audience. I still think about this today, right before I hit the stage. If you don’t love what you’re doing, there is something missing. Loving what you do is about humanity; it’s thinking about how your work affects your fellow man, rather than just yourself.”

Life Is a Gift is a volume filled with eighty-six years worth of wisdom and just as many anecdotes. But while the reader learns, for instance, how Mr. Bennett answers the inevitable question of whether or not he tires of singing the same songs over and over, particularly “I Left My Heart in San Francisco,” (He responds: ‘You ever get tired of making love?’), the reader cannot help but wish to know more about the things that are only mentioned in passing—Mr. Bennett notes, for instance, that he has been married three times, but gives scant details of these relationships and alludes very briefly to making the decision to give up drugs, again with a scarcity of actual details.

But obviously writing a tell-all was not on Mr. Bennett’s agenda. Instead, he has written a loving letter to his many generations of fans on the subject of “The Things That Matter.”

In that spirit, he leaves with this final Zen Koan:

“I have no desire whatsoever to retire; if I’m lucky, I just want to get better as I get older. Through the years, you shed the idea of competition and the desire to be the best; instead, you just want to get better for yourself. And if you do what you’re passionate about, the material things will come. I never need a vacation because I have a passion to sing and paint, and I get to do both every day. As far as I’m concerned, I’ve never worked a day in my life.”