The Life and Opinions of Maf the Dog, and of His Friend Marilyn Monroe 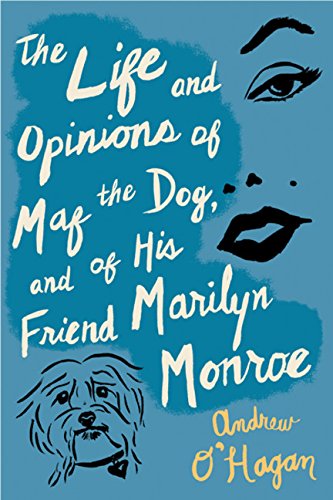 Faced with a book titled The Life and Opinions of Maf the Dog, and of His Friend Marilyn Monroe, whose cover is filled with retro-horror line drawings, the reader is daunted. Faced with this description of Vanessa Bell on the very first page, the reader is delighted: “She was always there with her oils and her eyes, the light falling through the glass ceiling to inflame the possibility of something new. She had good days and bad days. On good days she set out her brushes and knew the time was right for work when all her memories became like an aspect of sleep.”

It’s that “she was always there with her oils and her eyes” that kills. Had the reader been guilty of that most heinous of acts, judging a book by its cover? But, oh, what a terrible cover. And the title? Even worse.

The book itself? Something of a mixed bag.

The title tells much of the story. Likely more than it should.

It is 1961 and Miss Monroe is blue. She is separated from Arthur Miller, and he has taken himself and the dog off to live in Trumbull, Connecticut. She is in New York, attending classes in method acting with Lee Strasberg and his wife Paula, and reading Russian literature, particularly when cameramen are nearby. She is having gossipy drinks with Carson McCullers, whose tongue flows with Southern venom when the name of Truman Capote is mentioned.

As a medicine for melancholy, Frank Sinatra—riding high from his involvement in John Fitzgerald Kennedy’s recent successful run for the White House—buys Marilyn a little dog. A Maltese in our story, in real life, perhaps a Poodle. Reports differ. Marilyn Monroe, taking the little white dog into her adoring arms, named him “Mafia,” or, in these pages, “Mafia Honey.” Maf, for short. Again, reports differ.

What impresses the reader is the amount of research that author Andrew O’Hagan has done before sitting down to write. His knowledge of the last two years of Monroe’s life is encyclopedic, and he shares it all with us here within the pages of his book.

And O’Hagan layers his research on an apparent lifetime of love for literature and culture, as well as a long-time study of history.

As a result, there are more literary references here than you can shake a stick at. Certainly the most in any book written about a dog. They’re all here: Orwell, Waugh, Shakespeare, Philip Roth, George Eliot, Colette (and her cats), as well as a who’s who of performers of the day: Kim Stanley, Shelley Winters, Kevin McCarthy, Roddy MacDowell, Garbo, Yves Montand.

And, finally, the narrative is laced with cultural reference points, most notably Kennedy’s aforementioned election, which springs up again and again, ultimately to bite Sinatra in the ass, as well as Khrushechev’s shoe, the Cunard Line and Marilyn’s white piano. And there is the wonderful bit, historically accurate, that Marilyn, upon adopting Maf, immediately took the mink coat that Miller had given her and made it into the dog’s bed.

With all of this painting such magnificent details and filling in the local color, with a Rat Pack full of alpha characters ripping through the narrative and one of Hollywood’s brightest lights placed dead center, the reader finds himself puzzled as to the how and why of the story: how the novel is not more of a joy to read and why Maf ends up being so much less as a whole than the sum of its parts.

The answer, when it comes, it simple enough: It is a matter of point of view.

Instead of focusing his authorly camera on the sublime platinum face of Marilyn Monroe, O’Hagan has, instead, lowered the lens to frame the face of the animal that is sitting in her lap. Admittedly, Maf accompanied his mistress step by doggy step throughout this last, lost period of her brief life, but, honestly, does the reader want to read a story told from a dog’s point of view?

The answer, in brief, is: Not so much.

It is as if O’Hagan set out a challenge to himself: to write a serious work of literary fiction from a dog’s point of view. To this end, he gives his dog the most erudite of miens. Although Maf is, it is to be assumed, illiterate, the little guy is knowledgeable on subjects both vast and deep, with opinions that he wishes to offer about method acting, Trotsky, and interior design.

Unfortunately, when he attempts to share his wisdom he is invariably told to stop barking.

And this little joke, sadly, is perhaps the book’s leitmotif. Ultimately, the reader reaches the point of turning it into a drinking game, downing a shot of tequila each time the joke is repeated. And, with this, begins to like Maf all the better.

And yet Maf is not without it charms. Andrew O’Hagan is a masterful writer, whose turns of phrase oft times demand repeated readings of a given sentence before moving one’s eyes onward to the next—just for the sheer joy of his particular assemblage of words.

Consider the way in which he paints the scene when Jack Kennedy attends one of Sinatra’s parties: “I guess people were giddier because of the President, drinking more, dancing more later on, exhibiting that strange confidence people exhibit when they realize they might be at the dead center of the action. Everybody’s eyes were larger and probably darker than usual, engorged with power’s immediate proximity, and every girl in the room came armed with a question. ‘Mr. President, what can we do to support President Ngo Dinh Diem in his fight against the Viet Cong,’ said Angie Dickinson with a toss of her hair, a small furrow appearing on her brow as she ‘did’ serious.”

Or consider, more briefly, Frank Sinatra looking across the Queensboro Bridge from Manhattan: “The other side is paprika shops and sausage houses, he thought, and over here it’s one perfume counter after another.”

Or, finally, this—something too good not be shared. Of director George Cukor’s tremendous skill for directing actresses, he writes: “Cukor believed a woman is a project not an animal, a basket of pearls waiting to be strung.”

With this gift for language, for the detail that amuses as it enlightens, the reader wishes that O’Hagan had been more willing to fall back on what most generally passes for narrative. In placing the narration of his book in the paws of the Maltese, he Disneyfies his text, making that which might have been moving into something merely cute instead. He demands a suspension of disbelief that takes the reader out of the world that he has so carefully crafted. How can we delight in the details if chief among them is the fact that little Maf knows all, sees all, and can read minds?

Worse, O’Hagan seemingly depends upon our knowledge of Marilyn Monroe in order to fill in the gaps he leaves in recreating her here in these pages. He depends upon the celluloid image that we culturally share, the actress known as Marilyn Monroe, and does not, in this reader’s opinion, create a living character on the page. He spends his time fully fleshing out little Maf instead. Thus the reader feels robbed. Thus the reader cannot help but think, as he reaches once more for the tequila bottle, of what might have been.