The Life and Death of Ancient Cities: A Natural History 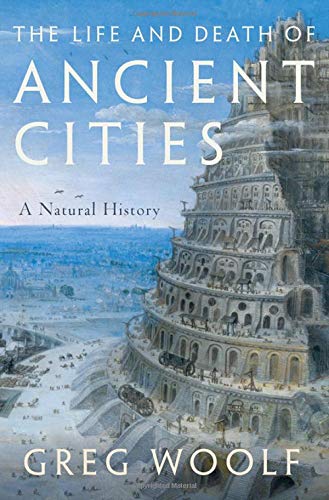 "The Life and Death of Ancient Cities joins a shelf full of enlightening new fun reads on understanding our beginnings in the ancient world."

Woolf "embarked on an urban adventure" in the ancient Mediterranean-Middle East and takes us along to see "how precarious urban life remained throughout antiquity." Mesopotamia had "the world's first urban civilization" and "the first world that speaks to us" through writing.

"Explorers, traders, craftsmen, chieftains, navigators, generals and kings had no more idea of where history was heading than we do today." The corona virus crisis reminds us that this stormy evolution continues to the present.

Life and Death of Ancient Cities is about a "succession of urban worlds," from Uruk to Carthage to Constantinople. Cities sometimes sprang up simultaneously "because the potential for city building had been growing for some time" and "the growing web of long-distance communication."

"Mediterranean urbanism is [only] one episode among many that make up our species' urban adventure," however. "Cities have been invented again and again," in many very different places around the globe, because "in what it means to be human, there must be a propensity to build cities."

Cities come from basic biological needs combined with the unique ability of humans to know, invent, and foresee. "The first travelers to record their experiences were often amazed at what they saw in foreign lands, but they were not amazed to find urban cultures."

Economic social constructions created by "urban apes" using "urban brains" in fulfilling their "urban appetites." "Farming was a necessary precursor of urban experiments, but not sufficient to stimulate them”; “the earliest agriculture,” key to the long-term success of cities, “was really more like gardening than modern agriculture.”

"Ancient Mediterranean urbanism was a late outgrowth of a much older tradition, and was always more dynamic in the east." Yet the author uses it to show how "cities have been invented several times quite independently, and the results have been surprisingly similar."

"A world of grand cities that never existed" has "become grandiose in our imagination" because of modern architectural representations, "grandiose rhetoric of ancient writers," and their political importance within their own times. This misconception remains a problem in understanding cities in context, even within recent decades.

"Urbanism was never in any place the result of a long-term plan" and "many great agricultural societies . . . never seem to have tried to create towns." “No doubt some opportunities were missed, and there must also have been many ventures that failed."

The author argues that "one of the key findings of the comparative study of early cities is that there was no single route to urbanism." Creating such a society, a palace manufacturing center, or a true city went slowly.

Colonization came late in the Mediterranean. It came about not just because of development of iron or only by the famous Phoenician expansion.

"Numbers fail to capture the enormity of change."  "Size does not work as a criterion." Jericho and Catalhoyuk "we're relatively large villages with populations in the thousands."

Ancient "Rome was exceptional"; it counts as a huge and magnificent city by any standard. Otherwise, "such giant cities did not exist in antiquity anywhere in the world."

"What counts as a city?" Woolf asks. "A city is one variety of nucleated settlement." "A city is more than a village."

"Cities are not just places" but also "had public buildings and religious precincts" as well as "workshops, fuller's yards, warehouses, smithies, potteries and breweries, market and shops," centered on "social differentiation, on inequality, on a division of labor," "the most physical manifestations of deeper and wider changes in society."

Woolf explains two complications in understanding cities, illustrated by the history of continuous occupation in such cities that are both ancient and modern such as Alexandria, Athens, and Rome. "Evolutionary change is rarely reversible" and "humans consciously make plans and set about implementing them."

Failure might come from "environmental disasters, social revolution, and invasions from outside," and “endemic diseases” including from agriculture, "with one disaster, or a number coinciding." Woolf writes that even the great Greek Hesiod wrote of "plagues, famines, sterility, and depopulation" as punishments from Zeus "for a city beset by proud and evil doers."

Woolf, for example, dates the Homeric epics from their lack of a mention of significant places well known hundreds of years earlier before the late Bronze Age collapse. Such cities and empires had become lost to memory. Once urbanization had existed, however, the author argues that the potential for its reemergence remains for centuries afterward.

The Mesopotamian urbanization created militant empires but the Greek Mediterranean city states "recognized and built on local peculiarities" created networks of cultures, ideas, and trade. "Even the Persian emperors were more likely to seek alliances with local rulers and peoples." From this evolution, our world would emerge.

This work has more to say about the fundamental origins of urban settings than about the fall of cities. Woolf explores ideas and possibilities in a respectful manner. Historiography, like cities, is evolving.

The Life and Death of Ancient Cities joins a shelf full of enlightening new fun reads on understanding our beginnings in the ancient world. This illuminating reading adventure includes photographs, annotation, and a bibliography.