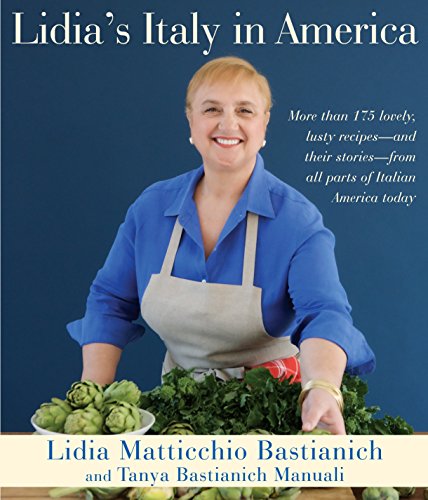 “The book breaks down its recipes into comfortably useful chapters on antipasti, soup, sandwiches, salads, pasta, vegetables, seafood, meat, and desserts. It intersperses them with profiles of Italian-American restaurateurs, farmers, vintners, and makers of everything from mozzarella to sausages to ricotta pie . . .”

For decades, “Italian” food has been the fallback for many in the kitchen who don’t consider themselves terrific cooks. Those recipes—usually Italian-American more than classic Italian—provided straightforward flavors with few exotic ingredients required. In Lidia’s Italy in America, Lidia Bastianich takes readers on a tour of those recipes and their origins in Italian enclaves across the country, providing accessible, clear instructions and a hefty dollop of nostalgia for those enclaves’ neighborhood delis, bakeries, salumerias, and restaurants.

The book breaks down its recipes into comfortably useful chapters on antipasti, soup, sandwiches, salads, pasta, vegetables, seafood, meat, and desserts. It intersperses them with profiles of Italian-American restaurateurs, farmers, vintners, and makers of everything from mozzarella to sausages to ricotta pie—from New Orleans to Seattle, Pennsylvania to Texas, Rhode Island to Missouri, Baltimore to San Diego.

Many recipes seem unnecessary for all but the newest cooks, such as mozzarella and tomato salad; stuffed mushrooms; garlic bread; spinach salad; or a sandwich of tomatoes, mozzarella, basil, and proscuitto, drizzled with balsamic vinegar and olive oil. Do you really need another (very simple) baked ziti recipe? Ms. Bastianich may have felt she needed these to fill out a comprehensive look at Italian-American cooking across the country, but they add little to the collection. Other once-common recipes, though, such as clams casino, may be unfamiliar to today’s younger cooks, and seem more useful here.

More often, however, Ms. Bastianich serves up interesting recipes, or basic ones with a twist (such as basil made with pistachios instead of walnuts or pine nuts). Among many recipes for frying, for example, is one for marinated artichokes fried in beer batter (though were the artichoke hearts supposed to be marinated ones from a jar? Judging from the recipe title, yes—though the ingredient list does not make this clear). Her basic recipe for chicken stock adds turkey wings for richness, she says (and also includes the unusual instruction to boil the stock for an hour, contrary to the standard bare simmer).

A dozen sandwich recipes appeal with their simplicity, but they point up the noticeable—and frustrating—missing recipes: those for the bread in these sandwiches. For readers who can’t easily buy rounds of muffaletta bread, semolina bread, or good-quality Italian rolls (or those who just prefer to make their own), the chapter seems significantly less useful. Still, many of the recipes will tempt readers, such as soft-shell crab sandwiches “Italianized” with semolina rolls and an arugula and egg salad, or the “gizmo,” a sloppy joe spiked with Italian sausage and fennel and topped with marinara sauce and mozzarella. Tasters did wish for more sauce, but the gizmo makes a quick supper or would work well for tailgating or other casual parties.

That marinara recipe begins with a can of tomatoes and demands little more beyond garlic and basil. Exemplifying the practicality in her recipes, Ms. Bastianich tells the cook to “rinse out the tomato can and bowl with 1 cup of hot water, and dump this into the skillet.” In many pasta sauce recipes, she uses liberal amounts of the pasta cooking water—useful for many American cooks who may know of the trick but rarely use it. (Likewise, she usually has cooks transfer cooked pasta directly from the cooking water into the sauce, rather than pouring it into a colander to drain.)

A beef sandwich from Chicago also keeps things simple, with pickled peppers as exotic as the ingredients get, and only a moderate use of garlic, which will appeal to cooks who find it overused in Italian-American food. Making the full recipe will feed a crowd or make great leftovers to freeze; in a test, the beef was roasted late at night, chilled (making it simple to slice), and reheated for an easy weeknight supper.

A sausage frittata, a skillet version of a strata, also keeps things easy for a weeknight supper or weekend lunch. It did, though, need a bit more seasoning; cooks accustomed to nearly all recipes now calling for “salt and freshly ground pepper to taste” will notice that Ms. Bastianich does not routinely call for pepper, though sometimes the recipes could use a bit more pepper or herbs.

Sometimes the recipes trade precision for the pleasantly casual feel found throughout the book; for example, a recipe for a sandwich topped with French fries tells only how to test the heat of the oil with the tip of a potato. Although not all cooks own a thermometer, those who do would appreciate being told the preferred temperature for the oil as well.

Those are quibbles, though: For an interesting review of classic Italian-American recipes and the communities that nurtured them, Ms. Bastianich’s book provides pleasant reading and comforting, unintimidating recipes.