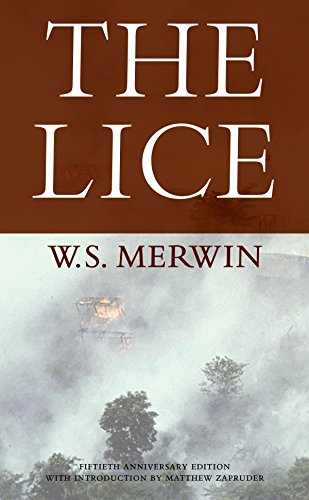 “any level of engagement with the poems of The Lice will open a pathway into vistas we all ought to see.”

There is a strong sense of foreboding fomenting the lines within the poems of the Fiftieth Anniversary Edition of The Lice, by W. S. Merwin. Not surprising, given the world events in the era when the original edition was written: the assassination of JFK, the battles over civil rights in the United States, the ramping up of the Vietnam war, the inception of Mao’s Cultural Revolution, the third Arab-Israeli war, among many others. In an interview with David L. Elliot, Merwin stated:

Within the timeline of world history, 50 years may be considered a speck, yet within the life a any writer, 50 years will see the lifetime accomplishment of literary works as they evolve on paper within the structure of that writer’s evolution. For Merwin, the past 50 years have seen the publication of nearly 50 books of poetry, the winning of the Pulitzer Prize, the National Book Award, and the Pen Translation Prize, and his appointment as United States Poet Laureate, among numerous other awards and accolades.

In this 50th anniversary edition, there exists the opportunity to access Merwin’s writings created in such tumultuous times, yet along with the reading of this volume is the eerie sense that his poems are particularly suited to the current condition of our world. So well-matched, in fact, that someone not familiar with the background of The Lice will see the poems’ statements as relevant to the unfolding of the political and socioeconomic dynamics that daily are unveiled across the media, worldwide. Look at the second stanza of Merwin’s poem, “The Last One”:

Well they cut everything because why not.

Everything was theirs because they thought so.

It fell into its shadows and they took both away.

Some to have some for burning.

It may go without saying that these lines are pertinent to a number of events taking place right now in the United States and worldwide, but one should ask: If our political systems have come full circle in the past 50 years, what was the original focus of their trajectory, what was the ultimate purpose of multilevel interventions over the years, of broad and specific social actions and the words and actions of political and cultural change?

What Merwin does within the pages of The Lice is not limited to observation. His poems create a picture—let’s call it a 3-D image—of a world. Seeing that image is like being inside the head of a hangover: inescapable yet sobering and with a very genuine desire for positive change moved by the roaring of everything around. His poem, “Whenever I Go There” offers a kind of summary of findings as evidence of undeniable truth:

Whenever I go there everything is changed

The stamps on the bandages the titles

Of the professors of water

The portrait of Glare the reasons for

With the lights off

And once more I remember that the beginning

No wonder the addresses are torn

To which I make my way eating the silence of animals

Offering snow to the darkness

Today belongs to few and tomorrow to no one

One could analyze the poems found within this book and even develop a sense of the “what” and “how” of their creation. But it seems the best approach is to imbibe the work of The Lice in several large gulps and let the poems themselves speak what they will, so that these poems may fulfill their calling: to inform the world via a circumferential view and to let that view then provide the impetus for whatever will follow. Merwin’s poem, “In One of the Retreats of Morning,” seems to suggest as much:

And at their feet the large brotherhood of broken stones

I go quietly along the edges of the garden

Looking at the few things they grow for themselves

Like so much of the work within this book, “In One of the Retreats of Morning” takes the pastoral and superimposes it with a worldview. The impact of these five lines is so dynamic that it refuses to settle in just one spot. And that is of the greatest significance in viewing the poems within The Lice. Their energy cannot be contained. It continues with a wavelike form as do beams of light shot across the cosmos on a never-ending journey. A trip into both our past and our future, wrapped into one seemingly inescapable continuum, as Merwin’s “When the War is Over” illustrates:

When the war is over

We will be proud of course the air will be

Good for breathing at last

The water will have been improved the salmon

And the silence of heaven will migrate more perfectly

And we will all enlist again

The reasons for a 50th anniversary edition of The Lice are numerous enough to compel its printing. All that remains is the reading of this work to remind an older generation of readers of their obligations to the world and to spur a new generation of readers into the reflection this collection should germinate. The cultural and political discourse that ought to ensue will be part of the resultant terrain should such broad scale soul searching become more than a fleeting thought with those who engage in this work. And any level of engagement with the poems of The Lice will open a pathway into vistas we all ought to see.