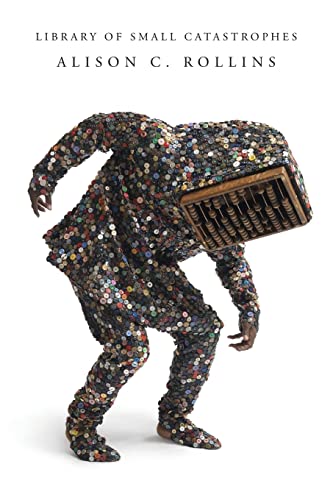 “The range of Rollins’ poetic skill is remarkable. The result is a collection of poetry which is magnificently crafted, readable, and crucially important.”

Library of Small Catastrophes by Alison C. Rollins is a magnificent debut poetry collection. Rollins’ work combines a detailed and precise poetic sensibility with emotional and political complexity. The titular library is metaphorical but constantly present, as though each poem looked into a different volume, encapsulated it, and offered up that knowledge to the reader. Librarians, objects of study, dictionary (re)definitions, and Borgesian metacommentary flow smoothly from the pages.

The “I” of these poems is outward-looking rather than solipsistic. Even when she speaks of her own body, the female persona locates herself within a tradition of black women who have been the subjects and objects of scientific medicine without themselves gaining authority or agency: “Venus Hottentot in a convex mirror / an interior coagulation of disembodiment. / The say that men are more visual & it is true / I can’t see myself from behind. / . . . Today a man in a white coat told me / about my insides, read me my body aloud.”

This interaction with a gynecologist introduces the book’s recurring interest in motherhood, interwoven with literature and knowledge. The body is a book, and, Rollins writes “the amniotic sac a dust jacket.” Here, womanhood, childbearing, and mothering aren’t anti-intellectual, they are the roots of all knowledge.

It’s knowledge, though, that has to be reclaimed. Race and sex have alienated it, erasing black female texts to establish authority. White supremacy shifts authority away from black women. In “The Fultz Quadruplets,” Rollins makes it clear: “The God is a white man. / The white man is a doctor. / The doctor is the one who / names things.” The Fultz sisters were the first known identical black quadruplets, and they became a spectacle. Their lives were shaped not by their parents, but by the doctor who named them. Though the girls were featured for “their first birthday, on / the cover of Ebony magazine,” they remained outside black control.

The question of narrative control recurs in “Self-Portrait of Librarian with T. S. Eliot’s Papers.” Here, Rollins locates herself as a scholar on the edge of knowledge, waiting for “the year 2020, [when] T. S. Eliot’s papers will be unsealed.” The power of revelation and visibility lies with the dead white poet, a reminder that “the canon is merely a ghost story.” New approaches offer genuinely new insights that these old papers lack: “Write a poem after me / before I’m gone, and please do not include rest in peace; / only those who are forgotten go undisturbed, only things / kept in the dark know the true weight of light.”

“The Librarian” who walks through these pages and measures knowledge is an educated woman in a quiet space, as expected. She is also, vividly, a black woman whose identity and history are synonymous with ignorance and illiteracy. This woman has never been romanticized.  Still, her value is crucial to any real sense of the universe: “The librarian is not the Spanish princess in Pan’s / Labyrinth. She is Topsy from Uncle Tom’s Cabin. / She spect she grow’d. She doesn’t think nobody ever made her. / Autopsy comes from the Greek autopsia meaning: / a seeing for oneself.” She has made her own authority through her own efforts. She does not rely on (racist, misogynist) traditions, but instead investigates each text and body on her own behalf.

These poems are ferociously political, and carefully controlled. Each of Rollins’ lines is measured and balanced. Each is composed with an ear for sound and rhythm, and an eye for shape and punctuation. She shapes her lines and varies her forms. The range of Rollins’ poetic skill is remarkable. The result is a collection of poetry which is magnificently crafted, readable, and crucially important.