Liberty Is Sweet: The Hidden History of the American Revolution 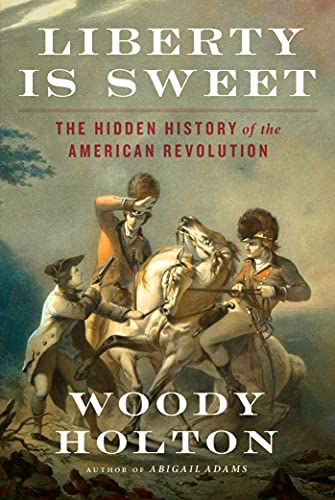 Woody Holton broadens the cast of characters we usually see in histories of the American Revolution. Besides the familiar set of white men, he brings in Native Americans, African Americans, and women—people who all had integral places in the history of the United States but who are generally left out of the story, thus the subtitle, “The Hidden History.” By widening the scope of what he looks at, Holton delivers a much more interesting and complicated story than the traditional legend of the nation’s founding. Textbooks have been content to reduce the reasons for the war to “No taxation without representation,” but the issues were much deeper and wider than that.

Holton starts his history with the Seven Years’ War, also known as the French-Indian War, a conflict barely mentioned in most school curricula:

“Why did Americans like Washington and Franklin later turn against their beloved British Empire? The root of the American Revolution ran even farther back than the Seven Years’ War. At the conclusion of their previous clash with France and Spain (the War of Jenkins’ Ear, 1739–1748), the British resolved to exert greater control over their North American possessions. In 1751, Parliament prohibited New England from printing money that was legal tender, meaning that creditors were required to accept it. . . . Royal officials hoped to extend the currency ban to all the provinces south of New England— and also crack down on colonial smuggling and rein in the real estate speculators who engrossed vast quantities of native land.”

Basically the colonists wanted more territory and they wanted to control their economy, neither of which were in the interests of the Crown. The issues with Native Americans were especially prominent.   Britain placated First Nations, seeing them as valuable allies and dangerous enemies. But the various tribes soon learned not to trust any promises made by the white men, even when they were granted land (it was their land to begin with, after all). As for the colonists, they saw any “land for peace” deal as abrogating their rights, calling the agreements an “unjust proclamation, forbidding any of the King’s Subjects to settle Lands so far back.”

The long string of native uprisings, especially those of the 1700s, are definitely part of America’s hidden history. Holton has righted a long-imposed wrong by telling these stories, introducing tribes that most readers will not recognize, so deeply has their history been buried. He does the same thing for African Americans and women, showing them as active participants in the formation of the United States, not passive bystanders.

Just as important, he sets out the many nuanced strands that led people previously loyal to the British to feel compelled to break away. Not all the reasons were noble—defense against the many tribes and the fear that the British would free slaves were also persuasive to many white colonists.

Holton does more than lay out the many stories that weave together into the history of the revolution. He explains the genesis of the Constitution, calling it:

“above all, an economic document. It created a national market and enabled the federal government to use the threat of commercial retaliation to open British Caribbean ports to U.S. ships. But most popular accounts of the origins of the Constitution do not even mention the economic motivation that was foremost in the minds of the framers themselves. Shortly after the convention adjourned, Madison affirmed that the ‘mutability’ and ‘injustice’ of the laws adopted by the thirteen state assemblies had ‘contributed more to that uneasiness which produced the Convention, and prepared the public mind for a general reform, than those which accrued to our national character and interest from the inadequacy of the [Articles of] Confederation.’”

In other words, the federal government needed to make sure that taxes, money, and debt all followed national rules, not a patchwork of states’ regulations that would keep the government from fulfilling its obligations, one of the first of which is listed as to “provide for the common defense.” This not only meant being able to impose taxes so as to pay armies, it meant having a federal army in the first place. As Holton succinctly states, “Settlers’ desire for federal protection against the Indians clinched the case for the Constitution.”

Besides correcting the common narrative of the motives behind the revolution, Holton gives a summary of its effects that flies in the face of our national myth:

“The overall impact of the American Revolution can never be objectively assessed, but the attempt is worth making. Ordinary freemen achieved modest gains, but many of these were erased by the adoption of the Constitution. Free women saw little change. Native Americans had participated actively in the struggles that led the Whigs to declare independence and in the subsequent war, but they also became the war’s worst victims. Thousands of African Americans obtained their freedom, but tens of thousands remained in slavery. And war-churned disease devastated every segment of the population. It seems clear that for the founding generation, the American Revolution produced more misery than freedom. It nonetheless mattered that most free Americans thought the Revolution had sparked a radical transformation and believed themselves. . . . the ‘freest people on the face of the earth.’’ . . . Many Americans brandish the Declaration as a trophy, but it owes its continuing relevance to those who take it as a challenge.”

Holton throws down that challenge to his readers, providing a richly researched, carefully thought-out, and complicatedly inclusive history, an antidote to the current black-and-white thinking that’s proving so divisive today.