The Liberty Bell (Icons of America) 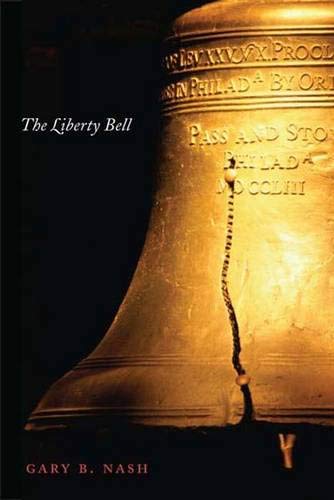 Liberty. One word—an idea, really. One which doesn’t simply process in our brains to bring context to a sentence or meaning to the words around it, but more implicitly resonates and travels deeper into our core, where every stirring notion of patriotism simmers. One word that immediately evinces two striking icons of the American essence: the Liberty Bell and the Statue of Liberty.

As Gary Nash conveys in The Liberty Bell, we long ago dismissed the idea that these icons were mere objects showered with our jingoistic ardor, but rather that we have imbued them with a kind of reverence and love only the vestment of our souls could provide.

Leviticus 25:10: “Proclaim liberty thro’ all the land to all the inhabitants thereof.” Daresay a solid number of Americans know these words as inscribed upon the bell, but perhaps more telling might be how many don’t know the passage, or only know the names Pass and Stow from the movie National Treasure. Mr. Nash’s scholastic approach to relating the Liberty Bell’s history leaves little doubt of its staggering relevance and gravitas as an enduring icon of our cherished founding principles.

Professor Nash moves sure-footedly from the pre-bell story through its period of actual use and into the larger, almost epochal journey through generations who venerated the Liberty Bell as a symbol of our democratic culture. Unless you are a historian (or history buff) you may not have known the State House Bell (or Old Bell—as it was known until around 1835—was removed from its tower in Philadelphia in 1776 and hidden in another town for fear the British, who came to occupy the city, would have melted it down for ammunition.

Many citizens don’t know of the bell’s near demise—along with the old Pennsylvania State House—in 1816, under a “Gothic mist of ignorance and vice”; just two of the rich, significant historical allegories Nash relates. Schoolchildren were inculcated with fabricated, emotionally charged stories of its use on July 4, 1776—a stigma which actually aided the tocsin in its rise to almost ephemeral reverence.

A generous amount of the book is allocated to seven separate trips the bell made over a 35-year span. If there is a singular quibble I have about the book it would be the amount of detailed information given about each and every trip—every stop, how many people showed up, etc. Without doubt there is value to such data, and in this case it serves to highlight the increasing popularity of the relic and how it served to bolster patriotism at crucial times when it was needed. I view this (very minor) discontent on my behalf as indicative of my wanting to learn the next piece of lore or passionate effect upon a new generation.

Appropriately, an in-depth look at the anti-slavery movement and the chimer’s role in it exposes the reader to many instances in which liberty was pronounced and exercised within close proximity to the bell, often at the expense of slaves.

A story from 1851, involving 33 blacks and five whites, furnished the reverberating overtones for caustic feelings from slaves being brought to trial in Independence Hall, mere steps from where the bell hung. Fugitive slaves had escaped into Lancaster County and these thirty-eight people defended them during what was termed the “Christmas riot” in which a Maryland slaveowner had pursued one of his own fleeing slaves and got caught in the turmoil and was killed. Abolitionists extolled the group as following the example of “Washington and other American heroes” in 1776. But outside Independence Hall a crowd of whites called for justice and punishment for those responsible for the killing and for “taking the lives of men in pursuit of their recognized and rightful property.” The Leviticus proclamation on the bell would seal its fame and its catapult into the world of causes—in a most moral and vitally important way.

Mr. Nash has given us a beloved, if muted, icon a solid, well-researched biography, one which puts right generations of embellished legend and sets into a proper framework the genuine gift to America the Liberty Bell has become. Iconic history at its sonorous best.