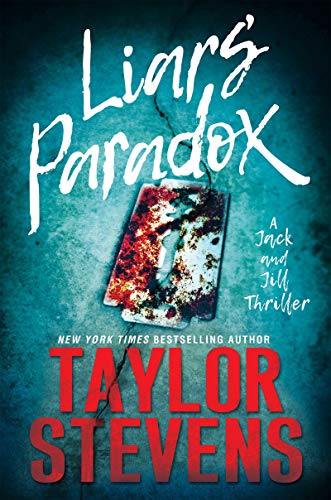 “Liars’ Paradox once again displays the fierce and powerful route this author’s already lived, and her determination to bare the horrors of today’s global balance of violence. Countered, of course, by skills, and passionate loyalty to family and friends.”

Jack and Jill—the names sound tame and cute, for a pair of angry 26-year-old twins finding their separate ways. But only their mother Clare calls them by those names. She taught them years ago to escape, hide, maneuver, manipulate. And survive.

In Liars’ Paradox, Clare calls these two home-grown psych warfare players back to her. Who could love a mother who’d bullied you at ages five and ten into the skills of top spies, from weaponry to surveillance to handling death threats? Taken you away from friendships. Moved you endlessly. Thrown you out on your own after all that, incapable of finding a civil place in the world.

Yet Clare hasn’t asked them to come home in a long time, and despite their simmering family rage, Jill and Jack head for her out-of-range safehouse in the hills, surrounded by unfriendly terrain and defenses. When the whole place explodes on their arrival, one question needs to be answered ASAP: Is Clare dead in the wreckage, or has some enemy force, some nation’s spy system (FBI, CIA, MI5, GRU killed her? Clare says they are all after her), swooped in to grab her, just as her resentful offspring showed up?

Short, hard-paced action chapters cascade, as these overtrained but information-deprived young adults chase down the force that’s attacked their bizarre security. With the pace of a Lee Child thriller, the knife and gun fights and high-tech weaponry flash, again and again, and with each comes a small revelation. Jack reflects on the pattern:

“Clare was stronger, . . . and in better shape than most men half her age. The only person he’d bet on going up against her was Jill, and that was because Jill was a lunatic trained by the lunatic. Clare could take care of herself.

He picked up his rifle, ran the bolt.

Clare was a pain in the ass and a horrible mother, but she was his mother, and it had now been a full day since he’d watched the helicopter leave her property, and still there’d been no sign of her or contact attempt from her.”

From vehicle chases to man traps, the twins tackle locating Clare. But even if and when they reconnect, the other half of the problem will still need attention: For Clare to be taken, one of those expert teams must have tracked her down. And Jill and Jack, in spite of growing up with Clare, have no idea of the still-active menace from Cold War days that can’t afford to let this little family survive.

Those new to Taylor Stevens’s high-tech, high-adventure thrillers will find parallels to John Gilstrap and Reed Farrel Coleman in Liars’ Paradox. Mute the TV to focus on the twists and revelations firing off like a semiautomatic with a finger held in place. Count on Jill to more than pull her weight, too, whether with a weapon or her sharp mind, as she teams up with her lifelong rival, her own twin brother. Ignore the clumsy cover design and the false-lead book title (the liar’s paradox is what happens when someone says “I always tell lies,” and you heard about it when you were a kid, right?). This propulsive page-turner turns modern espionage into a life-stakes race.

Fans of this author’s previous series, with the genderfluid Vanessa Michael Munroe, may find it challenging to accept a switch of protagonists. But the international span of Liars’ Paradox once again displays the fierce and powerful route this author’s already lived, and her determination to bare the horrors of today’s global balance of violence—countered, of course, by skills, and passionate loyalty to family and friends.