Liar's Circus: A Strange and Terrifying Journey Into the Upside-Down World of Trump's MAGA Rallies 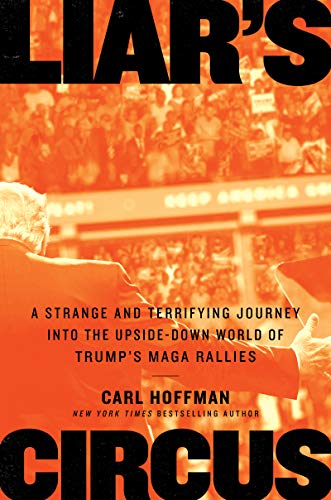 “A sobering, scarifying account that leaves the reader exhausted and in awe at the author’s endurance during these ritual gatherings of the MAGA tribe.”

Trust a writer long fascinated with indigenous cultures to give us a deep-dive look at Donald Trump’s MAGA rallies.

Carl Hoffman is not a political journalist. A former contributing editor at National Geographic Traveler, he is the author of award-winning books about head hunters in the wilds of New Guinea and the last nomadic hunter-gatherers in Borneo. But he couldn’t help himself.

Curious and moderately liberal (his father’s career in journalism began at Congressional Quarterly), he wondered, “What was happening in this country? The America of my parents appeared gone. Who were these Trump supporters, this mythical Trump base, and why were they so fervent about a man who stood counter to seemingly every cultural, ethical, social, moral, and political values of my childhood?”

His values: “Truth mattered. Science, reason, logic—the tenets of the enlightenment and liberalism were unassailable givens. Politics and government were a noble calling, as was journalism’s speaking truth to power.”

In this account of eight Trump rallies in eight states, Hoffman talked with dozens of people whose “absurdist non sequitur” blather led to “the most insidious conspiracy theories, a mythical worldview that wasn’t possible to refute or even discuss.” These occurred in parking lots, in arenas, and in bars and other venues where the author spent hours alongside ardent Trump followers.

There was nothing scientific about it. He didn’t administer an MRI. He took the temperature of the crowd. He didn’t disguise himself—he was a writer, he explained, if anyone asked. His slice-of-life report will be frightening to many readers, confirming their worst assumptions about Trump’s faithful. Others will dismiss the book as fake news.

In fact, Liar’s Circus is quite revealing.

First, it captures the frenetic atmosphere of the rallies, beginning with the 400th such gathering on Oct. 10, 2019, in Minneapolis. “A Trump rally is a sensual assault that hijacks your soul,” writes Hoffman. The halls are densely packed and brightly lit, filled with red, white, and blue signs. The crowds chant: “USA! USA! USA!” or “TRUMP! TRUMP! TRUMP! TRUMP!” The music—Mick Jagger, Elton John, The Village People, Aerosmith, etc.—is so loud many wear earplugs.

Second, it offers a good sense of the attendees, who often wait for hours for arena doors to open. In Minneapolis, they included a Jaguar-driving strip-club owner attending his 56th rally, a pipefitter traveling with a life-size cardboard cutout of the president, and a deeply religious Texan concerned about “serious Satanic stuff” going on.

Hoffman offers no reason to suspect he has cherry picked these individuals and overlooked vast numbers of less-startling people. Most, he finds, had “grievances, resentments, were desperately flailing out like drowning men for a savior.” Many were fundamentalist evangelicals. Most didn’t read newspapers. “Many of them didn’t even watch Fox News.”

Third, the book gives Hoffman an opportunity to celebrate blue-collar life and the teamwork and brotherhood of many workers, including underground coal miners and others, whose sometimes dangerous jobs had long defined “what it meant to be a man.” Now, with “the sun setting on their whole world,” they’d “glommed on to Trump’s disingenuous support of working men and women, and who could fault them for wanting to win, win, win again and bask in the glory days of American manufacturing?” But they were also nostalgic for privilege—“the days when an uneducated white man got a job over a better-educated Black man.”

Hoffman, who became “buddies” with several rally regulars, had anticipated talking seriously about policy and values, he says. “How could you have a conversation with someone who believed that John Podesta tortured babies and drank their blood?”

From Texas to Mississippi, the rallies followed a format. After hours of waiting, there was a shout: “The POTUS is in the building!” and Trump would appear to the music of “God Bless the U.S.A.” Then he began shameless bragging and lying and misleading people.

Early on, the author felt “dirty” from listening to Trump. Often weary, in need of sleep and relief from the “hermetically sealed bubble of conspiracy theories,” Hoffman was convinced he had looked through a window into “the darkest of human natures and of the power of the crowd itself.”

A sobering, scarifying account that leaves the reader exhausted and in awe at the author’s endurance during these ritual gatherings of the MAGA tribe.