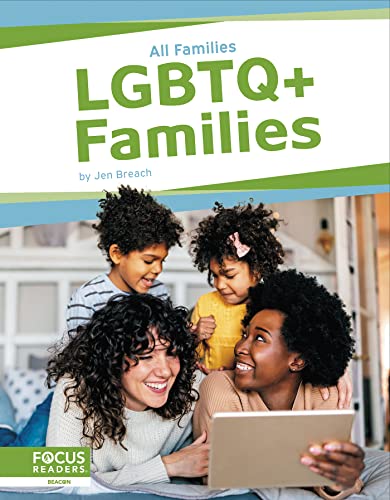 “The general message in LGBTQ+ Families is that all types of families exist, and they are formed in many different ways.”

LGBTQ+ Families serves as a starting point for discussion and dialogue about LGBTQ+ individuals within their family relationships. This brief and simple book is targeted to elementary school readers with libraries being the primary customer. It has the feeling of being a basic reference book for early readers.

Divided into four quick chapters labeled: Family Pride, A Rainbow of Families, A Rainbow Behind the Clouds, Bright Blue Skies, with a sidebar about gender identity, LGBTQ+ Families presents fairly neutral vocabulary without judgment or controversy. Family Pride explains that there are different types of families structured around different combinations of genders and that many people feel inclined to advocate for the right to define their own family.

A Rainbow of Families touches on the way families are formed within the LGBTQ+ community. Some families are biologically formed, others via adoption. A Rainbow Behind the Clouds defines what it means to “come out” and acknowledge one’s gender identity, beliefs, expression, and preferences. This can be a scary experience and full of discrimination and bullying. But Bright Blue Skies ends with upbeat notes about the increase in LGBTQ+ allies and programs designed to support people in their gender journey. Education among “cishet” people and using correct pronouns are ways to relate better to the LBGTQ+ communities.

The only design graphic in the book provides a visual way to organize the differences between gender belief, gender assignment, gender expression, and gender identity. Other than this graphic, all of the images are photos taken from Shutterstock Images.

There is not much meat on the bones of this little book. There isn’t even a description of what LGBTQ+ actually is except for the definition in the Glossary. The reader will not know what each of those letters refers to, which would have been helpful in relation to the Gender Identity graphic. There is a vague assumption that cishet families are the opposite of LBGTQ+ families, but clarification on this would be good since overall the author seems to be pitting one against the other. Both of these downsides are huge missed opportunities to easily provide more robust information to the reader.

Without going into too much detail, the book offers up tons of room for conversation starters around LGBTQ+ as a topic. The general message in LGBTQ+ Families is that all types of families exist, and they are formed in many different ways.