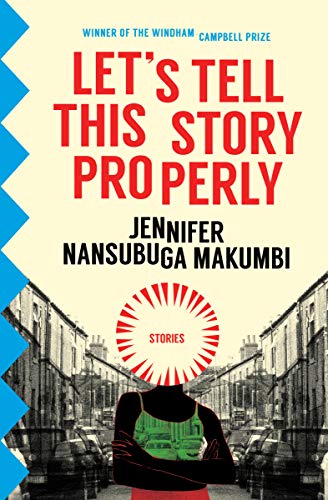 “This is a collection to savor in bits and bite-sized portions; there are too many pungencies to swallow in one gulp.”

One of the pleasures of reading is learning about a “world elsewhere”; one of the charges of writing is to send “news from home.” In her first collection of stories, Let’s Tell This Story Properly, the writer Jennifer Nansubuga Makumbi ambitiously offers up both. This writer’s debut novel, Kintu, won the Windham Campbell Prize, and her reports on Uganda have earned widespread praise. Now her focus—in the literal as well as metaphoric sense—is on border crossing, and we watch a series of figures in limbo: one foot in Europe, one in Africa, attempting to navigate both.

This gathering of stories is divided, roughly, into two equal parts. The first, titled “Departing,” deals with the experience of those who come from Uganda to England—most frequently the town of Manchester. The second, “Returning,” deals with the experience of those who return to their no-longer wholly familiar place of origin. Some characters recur; some appear fleetingly only, but their common denominator is displacement. Her protagonists—both in the first and third person—ask themselves repeatedly where and to which culture they belong.

Routinely, such polarities are visible and challenging, even if the distinctions drawn are difficult to parse. “The mother wore an orange and blue Changtai gown. It was clearly a ceremonial dress but in my anger I thought that she should have worn a busuuti if she wanted to blend in.” In this story, “My Brother, Bwemage,” the Chinese presence in Uganda comes stage center, but more often it’s the British colonial legacy that Makumbi explores. And the two ways of being—British and Ugandan—seem both at odds and conjoined.

Weather matters (the long cold northern winters, the absence of sunlight), food and clothing matter (how it is processed, and what you can buy for how much). Wealth matters (the number of rooms in a house, the amount of cash proffered in an envelope); and lineage means a great deal. Family relations matter (who speaks to whom or refuses to do so); burial rites and nomenclature count. Here’s an extended example of this last, from “Something Inside So Strong.”

Of the trials of dislocation and the challenge to identity, there are several tales to tell. A wife discovers that her husband has a second family installed at her home in Uganda; a single girl decides it might make sense to have a child with her old friend back in England, though he’s a married man. “We’re no longer Mikka and Kitone, close friends. He’s Mikka with potential.” A woman who works uncomplainingly at a menial airport job discovers a fellow employee who elsewhere puts on airs.

Another character reports, “She wrestled with her own Africanness. I could see her pain and confusion but there was nothing I could do. It is a phase every new arrival from home goes through out here. The more hopes you have in Britain, the more arrogant and inadvisable you are, the bitterer the pain.”

In the story, “Memoirs of a Namaaso,” the narrator is a pariah dog brought unwittingly to England in the company of a much-coddled Pekingese. The contrast between the scavenger who lives outside and a pampered indoors pet is meant to stand as emblem of the larger opposition. This particular instance feels a touch forced; Makumbi is more persuasive writing as a displaced person than a displaced dog. But when Namaaso begins her story, there’s direct declarative utterance that states her plaintive case:

“My British name is Stow. I am 16 human years old and I was born a Pariah in Uganda; call me feral if you are contemptuous. I only became a pet when I arrived in Britain fifteen years ago. I have three or four weeks to live.”

In part because of its titular injunction, “Let’s Tell This Story Properly,” it’s a near-imperative that each line be properly told. As suggested by the title, there’s an emphasis on the oral transmission of stories, and there’s an implicit collective “us” in the plural “Let’s.” But individual sentences throughout are less than authoritative—at least as written, not spoken—and it’s worth listing a few: “They sold glittering jewelry and sparkly watches and shimmering things Abu did not know what for.” Or, “As she walked, a smidge of self-satisfaction fleeted across her face.” Or, “Poonah’s heart fell onto her stomach.”

Some of this, perhaps, has to do with the meld of languages, a kind of pidgin English-cum-Luganda spoken here throughout. At times the characters break into chants or discourse or forms of salutation that won’t make much sense to the monolingual reader; in the celebratory ritual of a public castration, we read:

Yet the author makes indelible the crowd’s accumulating frenzy as Masaaba submits to the knife. Elsewhere, a transaction as to a cross-clan marriage is vividly enacted, “Mulumba’s clan broke out ululating,” until one of them declares his dream is “A ticket to Disneyworld—Orlando!” A character called Berry “was well-meaning but a trouble-maker nonetheless. He had wild, wild ideas of being equal to whites in their own country. He was a continual tenant at Greenheys Police Station, which he wore as a badge of honour.”

The orthographic variation of “honour”—its English spelling—stands for more than an additional “u.” We see things askew but only slightly, and common meaning comes through. Time after time, Makumbi succeeds in making the familiar strange, as well as the reverse. This is a collection to savor in bits and bite-sized portions; there are too many pungencies to swallow in one gulp.