Let's Never Talk About This Again: A Memoir 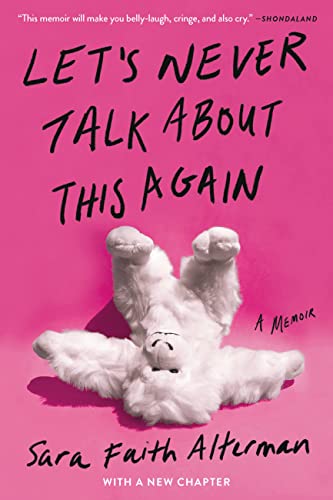 Though a serious reader may feel squeamish about reading a memoir of a daughter stumbling upon her father’s secret stash of “porno” books, Let’s Never Talk About This Again is a sweet accounting of a daughter who tries to come to terms with the incongruity of her father’s conservative parenting with his interest in writing juicy books about sex. As she unravels the mystery in a comical recollection of various episodes from her childhood, author Sara Faith Alterman succeeds to bridge the gap between the seemingly hypocritical father, Ira, with the loving one who loses his mind in later years to Alzheimer’s.

Jazz music-loving Ira tries valiantly to limit Sara’s and her brother’s exposure to anything remotely sexual in nature on television and printed materials while they are growing up. Sara’s mother stanchly defends her husband’s uncanny and strict position with their children. All this hush, hush behavior about anything sexual only inspires Sara in her teenage years to find things out on her own and to try to hide her discoveries from her parents. Thus, they never talk about these things, or at least not until years later when the aging father enlists the help of his reluctant adult daughter to write some of his stories for the “family business.”  In this series of revelations, Sara grows to understand the man with so many contradictions as she watches him decline with the disease and as she tries to live her own life through a writing career, marriage, and motherhood far away from her parents’ doting natures.

It may be easy to dismiss this memoir as one of those millennials balking at the old geezers in the room, but it turns out to be real life played out in hospitals and nursing homes these days.  The humiliation of a parent losing control of his life and reluctant to admit that he needs help until he is no longer able to string together the simplest request awakens pity and love in a daughter who had been jaded by some of life’s challenges, including those of her wacky father. Luckily, she finds refuge with a loving and understanding husband and with her own children.

The scenes are entertaining, and we can all identify with such to some degree no matter what generation we are, like this one when Sara is trying to help her father with his computer:

And, while reluctantly working with her father on one of his stories: “Another person might laugh at their dad’s dirty-old-man shenanigans. . . . None of this is salacious.  My father wrote some corny porn/porny corn that brought joy to the world and, as far as I could tell, caused no pain for anyone but me. .  . . Over decades of compartmentalizing his life into a bento box of personas, my father had never once dropped the Dad act with me.”

Upon learning of her father’s diagnosis of Alzheimer’s:  “I thought of the computer woes and the Google fury, the curb-jumping and the condo-buying. The sex talks, and books, and pictures. . . . The doctor kept throwing information at me. . . . “he needs to have immediate goals to focus on, a sense of purpose. . . . Does he have any passions?” .  .  . “He has passions,” answers Sara, alluding to the latest story she had worked on before her father’s mental demise.

In the end Sara tries to help her mother manage life around her father’s rapidly declining condition, and we see a different side of Sara. Gone are the impatient, eye-rolling smirks, the regrets of not talking about certain things, the confusion about her father’s behavior. We see a tenderness emerge and we are happy for her.