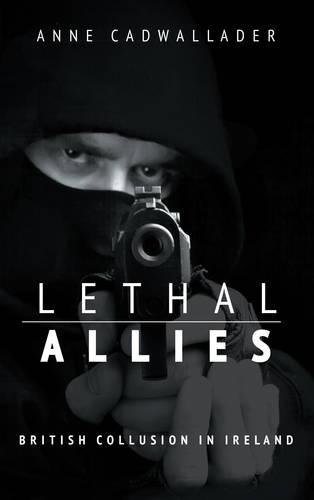 “. . . a well-written piece of investigative journalism that asks some deeply troubling questions . . .”

There can be few of us who have not heard of “the Troubles,” those terrible times both in Northern Ireland and in the Irish Republic that we all hope have been consigned to history since the Good Friday Agreement of 1998.

Most will also have heard of the IRA (the Irish Republican Army). Whether you consider them freedom fighters or terrorists, bloody deeds were done in their name on both sides of the Irish Sea. But many may not have heard of their paramilitary counterparts, the UVF (Ulster Volunteer Force), another organization with terrible bloodstains on its hands.

Sadly, years of bitter experience culminated in a dreadful expectation of terror and bloodshed from these organisations. As one side’s atrocity outdid another’s, we shook our heads but moaned “What else did you expect from them?”

And there lies the rub: What we didn’t expect was that trusted upholders of the law colluded with a gang of UVF paramilitaries in the murders of numerous innocent Irish men and women.

Anne Cadwallader’s meticulously researched book Lethal Allies is an investigation into the Glenanne gang. Lethal Allies makes a compelling case for the uncomfortable truth that members of the British Army, Military Intelligence and the Royal Ulster Constabulary (as the Northern Irish police force was called at the time) aided and abetted this particularly ruthless bunch of Mid-Ulster paramilitaries as they killed innocent Catholics. There is credible evidence that on occasion, police officers and soldiers from the British Army’s Ulster Defence Regiment (UDR) were actually part of the gang.

The gang’s infamous leader was Robin Jackson who until his death from cancer in 1998 was known in the media by the soubriquet “The Jackal.” This was apparently to “avoid libel action” though having read of his murderous exploits in this book, one might suspect that a far more dangerous outcome could have been the real motivation.

The number of people Jackson killed “ranges from a conservative estimate of fifty up to a hundred or even more,” theoretically ranking him among the UK’s most prolific serial killers.

Yet he was never convicted of murder—or much else for that matter. Cadwallader concludes that his numerous “lucky escapes” were in fact orchestrated to protect him as an agent of British Military Intelligence, and the RUC. And there is conclusive proof to back up this argument.

Despite the in depth scrutiny and shocking exposures of Lethal Allies, Cadwallader believes this is the tip of the iceberg: “I can say with some confidence that, shocking as the revelations are, it probably went a lot deeper.”

These startling revelations at first seem incredible, but the rationale behind them is a principle known as “my enemy’s enemy is my friend.” It now appears that at a time when Britain was already fighting the IRA not just a blind eye but also a helping hand was extended to the UVF.

All but one of the Glenanne gang’s victims were ordinary people: farmers, shopkeepers, bricklayers. The accounts of shootings and bombings are harrowing.

To turn away would be to deny the innocent victims any chance of justice for a second time, victims like the 33 killed by the four bombs in Dublin and Monaghan one May afternoon; victims like the three young Reavey brothers gunned down by masked men as they sat by the fireside watching television. No one has ever been charged with these attacks but after painstaking research, Cadwallader has linked these and numerous other murders with the Glenanne gang.

This is no conspiracy theorist’s shock-and-tell; this is a well-written piece of investigative journalism that asks some deeply troubling questions about those who were paid to uphold the rule of law.

Just because the book ends doesn’t mean the story does.