Let’s Call It a Doomsday 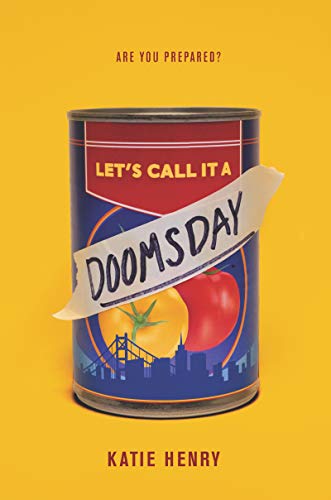 “A heartfelt tale of a teen’s struggle to define her own identity . . .”

Katie Henry’s Let's Call It a Doomsday is an engaging tale about coming of age, coming out, and learning how to come to grips with the things we cannot control.

Sixteen-year-old Ellis is an amateur etymologist, semi-professional doomsday prepper, and full-time anxiety sufferer. She’s also a devout Mormon, struggling with her sexuality, feeling the weight of her mother’s constant nagging, and fearful of, well, everything, especially the end of the world.

Ellis’s constant hyper-awareness and obsession with doomsday keep her isolated from her family and peers until she meets Hannah, also a patient of the therapist Ellis sees, who tells Ellis they “were meant to meet.”

Hannah is a siren, steering Ellis into ever more dangerous shoals while also opening up Ellis’s world in new and wonderous directions—including making new friends and meeting a boy, Tal, who was raised in the same church as Ellis but left after he realized he was bisexual. When their relationship is stalled by Ellis’s fears and anxiety, he tells her, “everything good in the whole world could hurt you. Doesn’t mean it will. You only want the safe parts. It doesn’t work that way.”

As Ellis joins Hannah on what seems like an impossible quest to fulfill a prophecy Hannah has dreamed of—finding her long-lost, mentally ill brother before the end of the world—the two girls force themselves to face their fears, embrace their faults, and find faith in their own unique gifts. With Tal acting as a mentor, Ellis raises above her anxiety long enough to wonder if she deserves to someday find happiness.

A heartfelt tale of a teen’s struggle to define her own identity, Let’s Call It a Doomsday is sure to satisfy readers young and old.