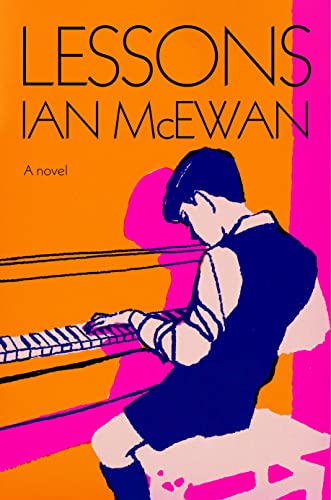 It’s interesting that the title of Ian McEwan’s wide-angle and engrossing family history is Lessons, because his protagonist, Roland Baines, is inclined to abandon his teachers. Despite being something of a prodigy he quits his piano lessons, and then abandons school, too, though he has some fairly good reasons, and in fact Roland does learn some important lessons in the course of a long life.

Lessons is a big book, 430 pages of Roland’s story, beginning when he is about 11 years old and ending when he is in his seventies, with some attendant flashbacks. His story plays out against a whole lot of modern post-war British history, some of which comes to the fore filtered through Roland’s changing political perspective (from the left to some form of moderation). King Oscar II of Sweden is just one of many thinkers who observed, “A man who has not been a socialist before 25 has no heart. If he remains one after 25, he has no head.”

Roland has roughly the same life span as McEwan, born in 1948, and in fact Roland’s early biographical details match the author’s. Both had martinet Army major fathers posted to North Africa and timorous mothers, and both had bad first marriages. But this is only partly an autobiographical book—McEwan’s life and that of his character diverge firmly as teenagers. With 19 novels to his credit, several of them as he says “adapted for the big screen,” McEwan is a doer. Roland, to put it mildly, is not—he’s the McEwan who couldn’t get started.

Momentous things happen to Roland, who has mostly passive reactions. Early on, we learn that he was seduced by his female piano teacher at age 14—the direct catalyst for his quitting school—and that, many years later, his German-born wife left him and their infant son.

With university no longer an option, Roland gets by with odd jobs and knockabout piano gigs that don’t pay enough. His son Lawrence grows up with an absent mother, who off in the distance is becoming a famous writer. She’s not McEwan in disguise, though both draw deftly on their life stories and both occupy their respective country’s literary pantheon. As for that molesting teacher, well, Roland mostly lets that go, too—though they’ll meet again.

Roland’s chronic inability to get moving should be a liability for the book, but it’s mostly not because he’s a very astute observer, and so much happens around him. Soon he has a large cast of interesting people, in England and Germany, circling his stationary pivot point. Although the character’s failure to commit repeatedly threatens to destabilize his life, the novel makes a case for muddling through. As is sometimes said, provided there’s some decency aboard it may well come out right in the end.

Roland is stagnant and barely moves from his dank apartment in Clapham, but the book is not. McEwan writes so well that the story never flags. Erudite passages on, say, the Cuban missile crisis, the fall of the Berlin Wall, the Margaret Thatcher years in Britain, and forward to the onset of digital phones, Brexit and COVID, are all engrossing.

Roland is the type of person who will leave nothing behind. No great piece of music, no great writing, no record of achievement. Save a footnote or two, he will be in the paper twice, when he’s born and when he dies. The great American novelist Stewart O’Nan conjures characters like this. And yet Roland finds a form of contentment, builds a worthwhile life, loves and is loved. Is it realistic that, given the missed opportunities, the real Roland would not be worn down by regret, as his mother apparently was?

Yes, because McEwan makes him three-dimensional and plausible. Roland’s loving circle (there in part because of good luck) contrasts to his estranged wife’s life of monastic productivity. Just producing a shelf of books—as McEwan himself has done—is no recipe for happiness.

Forgive Roland Baines his stasis. The great confrontations of his life—with his former wife, with that music teacher, with a romantic rival—tend to peter out inconclusively. But in the end, Roland is a good man. He—or at least the life around him—is compelling company for the 430 pages.