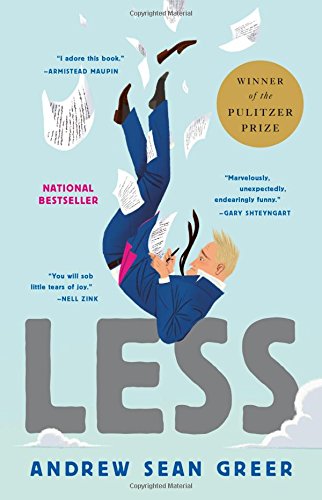 “there ought to have been more to Less than the sum of its parts.”

If it’s anything, Less is a lovely hand-painted Matryoshka, a cluster of wooden dolls all cluttered within one another.

It is, after all, the story of a tall, blond, white man who is dejected because his latest novel has been rejected by his publisher after a decade or more of middling success with previous works. And so, in his sorrow over this and recent lost love, he wanders the world seeking drips and drabs of new experiences, none of which truly measure up, either to our hero’s expectations or to counterbalance the weight of what he has lost.

And that latest novel, the one that was rejected outright, without even a list of editorial comments?

It is one in which the protagonist—a tall, blond, white man— having arrived at middle age with only middling success and having learned along the way the sorrows of love gone awry, wanders about on the streets of San Francisco in a simmering state of pique.

This novel-within-our-novel is the work of our hero Arthur Less, who, like the hero of his book, is native to San Francisco. And just as our novel is named for its protagonist, in this case Less, the name of the hero of the novel-within-our-novel likewise supplies the title—in this case Swift. Both names, of course, carry a sort of poetic heft, and both names are of the sort that can be bitten off quickly when said aloud.

Now, all of this, or, better, both of these, Less and Swift, are the work products of Andrew Sean Greer, the actual author of the actual novel, Less, in which the novel-within-our-novel, Swift, is referenced. Greer is, of course, a handsome and tall (as best as one can tell by looking at his author’s headshot) blond-ish white man, who has heretofore authored several well-respected novels and won some prestigious literary awards. Also, according to his author’s bio, he splits his time between his homes in San Francisco and Tuscany.

It is this last bit, this reference to a certain tract of likely agricultural property in a certain region of Italy, after all the references to tall, good-looking, sort-of-successful white men, that catches in the reader’s throat. That gives rise to a fit of pique. And that makes the reader apt to like Less a great deal, well, less than he should.

What needs stating, however, right up front, is that Andrew Sean Greer is one hell of a wordsmith, one who most especially pleases in descriptive moments, like this, from the very opening of the book:

“Look at him: seated primly on the hotel lobby’s plush round sofa, blue sit and white shirt, kegs knee-crossed so that one polished loafer hangs free of its heel. The pose of a young man. His slim shadow is, in fact, still that of his younger self, but at nearly fifty he is like those bronze statues in public parks that, despite one lucky knee rubbed raw by schoolchildren, discolor beautifully until they match the trees. So has Arthur Less, once pink and gold with youth, faded like the sofa he sits on, tapping one finger on his knee and staring at the grandfather clock. The long patrician nose perennially burned by the sun (even in cloudy New York October). The washed-out blond hair too long on top, too short on the sides—portrait of his grandfather. Those same watery blue eyes. Listen: you might hear anxiety ticking, ticking, ticking away as he stares at that clock, which unfortunately is not ticking itself. It stopped fifteen years ago.”

There is great beauty in Greer’s words, in their rhythms, their twists and turns and repetitions (“ticking, ticking, ticking”) and in their collective meaning. There is vast skill in his ability to conjure characters and to express their foibles, their cravings, their motivations in so very few words. And there is an inner gallop to his sentences that dares the reader to look away.

And yet there is also the matter of all those tall white men, all stacked upon each other, the author, his protagonist, and his protagonist’s protagonist—all worrying over their golden hair, all searching for something in their own reflections, all fussing away from their perches in a writer’s retreat in India, or camelback in Morocco, or in a private dining room in Kyoto, or even from within a “shack,” a small private home on a hillside in San Francisco where a trumpet vine outside the window dapples the sunlight coming into the bedroom . . .

It is hard to think of another book so wonderfully well written—indeed, were these words pudding, I would not just spoon it all into my maw, but would lick the bowl until the last trace of flavor was sadly gone and then spend an hour contemplating what I had tasted—that ultimately disappointed.

Arthur Less, you see, has lost his love. Or rather, lost the guy that he had grown to feel sort of, kind of lovingly toward. Who spent nearly a decade of nights with him in that little house on the hill in San Francisco, but who never quite lived with him in all that time. The guy one day calls it quits and announces that he is about to marry someone else, which is the source of Less’s ongoing fit of pique. That along with his novel being turned down. (Which is worse? Who can say?)

To avoid the wedding, he says yes to the sorts of invitations that a middlingly successful author (defined in the book as being “one who never sits next to anyone on a plane who has heard of his books”) usually says no to—a literary conference in Mexico, a ceremony for a literary prize in Italy that he is shortlisted for, an offer to teach a course of his choice at a university in Germany, that sort of thing—and plots out a trip around the world that will allow him distance from the wedding and time to rewrite his novel in a manner in which it may become publishable.

The plot of the book intertwines the trip, the rewrite, and the wedding—the events of which are revealed bit by bit through bites of gossip scattered across the world like breadcrumbs—as Arthur Less scatter-shots around the globe, taking sleeping pills on airplanes, checking and claiming his baggage, and keeping his magic blue suit clean and fresh for the next adventure. The subject of hair (enjoying the fact that it is gold, keeping it gold, for, finally, keeping it at all) is everywhere, as is the need for some sort of fame, or, if not fame, then at least recognition, and the anger/depression/sorrow/and, above all, pique that Medusa-headed ball of snakes that it part and parcel with broken-heartedness.

Along the way, there are moments of descriptive bliss:

“Arthur Less is the first homosexual ever to grow old. That is, at least, how he feels at times like these. Here, in this tub, he should be twenty-five or thirty, a beautiful young man naked in a bathtub. Enjoying the pleasantries of life. How dreadful if someone came upon naked Less today: pink to his middle, gray to his scalp, like those old double erasers for pencil and ink.”

And the reader reads along, a chortle here, a sigh there. And the pages fly by. Until at a certain moment, somewhere in some exotic place—it was India for me, with the reappearance of a character whose original appearance I could have done without, who might well be described as the “poor man’s Clare Quilty”—the reader suddenly knows in his heart of hearts that all of this is briskly, enjoyably moving along toward nothing whatsoever, and that, even if the author is capable enough to be able to use the word “pantaguelianally” in a sentence, the book will ultimately disappoint.

And it does. In spite of a description on page 251 that is dizzyingly good:

“His mother’s friends: each with her own peculiar spiked or curled white hairdo, like a dahlia show.”

There are these sentences that make the reader’s eyes pop, but there is also an ending that is trite enough that the reader spends the bottom half of the book hoping that it will not be the ending. And then it is.

Thus the reader is left unsure of exactly how to conclude. Except perhaps, in avoiding a trite ending all my own (“Less should have been more!”), to say that what frustrates is that a writer of great talent has allowed himself to call finished something that needed to go higher, faster, further, in order to become that thing that it coulda woulda shoulda been. Or, more simply put, there ought to have been more to Less than the sum of its parts.