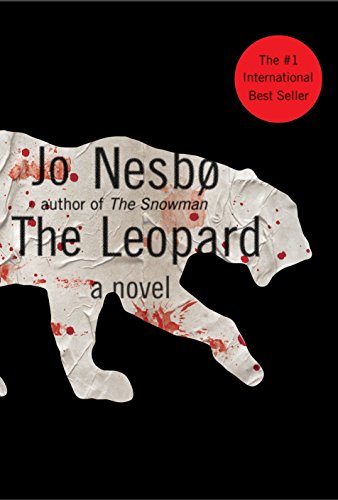 “Mr. Nesbø, despite what would be tragic flaws in lesser hands, takes these flaws and uses them to his advantage to make for a hell of a good book. How? His powers of description and mastery of the written word are both eloquent and elegant. His control of pacing is exquisite. He’s a writer of great talent, an excellent craftsman. . . . The Leopard is conceptually a huge undertaking for an author, an unusual, eccentric, and excellent work. Highly recommended.”

In The Leopard, Jo Nesbø might have included an author’s note at the beginning of the book: “I ask the reader to suspend disbelief from page one. If you do this, I will take you on a rollercoaster ride. I will blind you with dazzling writing. I will hold you spellbound. Believe in me. I promise not to disappoint you.” And except for some minor exceptions in the sprawling 624-page book, he doesn’t.

As the novel opens, we find protagonist and antihero Harry Hole in Hong Kong, saturated in opium, living in squalor, beaten, his jaw broken—not reset by a doctor and mended off-kilter, creating a mild deformity—and sought out by the Triads because of gambling debts. He seems intent on dying there.

Enter Kaja Solness of the Oslo crime squad. She has been dispatched to save him. A possible serial killer is on the loose, and only Harry can solve the case. She pays his debts, but still he refuses to leave. Then she plays her ace in the hole: Harry’s father is dying and hasn’t long to live. This knowledge gets Harry on the plane back to Oslo.

Belief suspension #1: Jo Nesbø, in the Harry Hole series, makes it seem as though Norway is awash in serial killers. Fact: There is only one case in modern history of a Norwegian serial killer, and as serial killers go, she’s rather mundane. Arnfinn Nesset poisoned 22 people at the Orkdal Alders-og Sjukeheim geriatric nursing home over a period of years before being convicted in 1983.

Belief suspension #2: Kaja, who is the beautifulest beautiful of the most beautiful, will fall in love with Harry, who although insightful, is an often arrogant, mean-spirited, and condescending alcoholic and drug user. Although he possesses redeeming qualities, he’s reticent about others discovering them. Harry even manages to take her away from his successful and cunning nemesis. Somehow, they make sweet love just after he finishes a booze-induced vomiting session. You can count your own suspensions of disbelief from here forward.

Once in Norway, Harry still to refuses re-up wtih the police until a third victim, an MP, is killed. Evidence at the scene makes Harry believe the police are on the wrong track, the bloodhound in him takes over, and he agrees to join the police in the hunt. The murderer’s weapon of choice, a device called Leopold’s apple and used on the first two victims, is something any torturer in the Inquisition would have been proud to own. It leans toward fantasy, but is such a delight for fans of grim murders that this must be forgiven.

Harry understands the human condition and the deranged mind to such a degree that he seems prescient. Three dozen detectives can be in a room, but only he will have a true understanding of any given situation. So far in the case he has little to go on: some gravel, a bit of rope, a strand of wool, and he finds a connection between the victims that neither the Crime Squad nor Kripos (think FBI) could discern. The case will take Harry and Kaja from Oslo to high in the snow-covered mountains of Norway—where Harry will perform a feat worthy of any comic book hero—to the edge of an active volcano in the Congo, where he will endure the unendurable and persevere to save a life, solve the case, and end the series of murders.

Throughout the book and innumerable red herrrings, Jo Nesbø will convince you approximately every ten pages that the character you were convinced was the killer could not possibly be. It seems as though there is a cast of thousands—and yet nearly all of them are at some time or another are point-of-view characters. The story line is overcomplicated and at times convoluted. Yet Mr. Nesbø, despite what would be tragic flaws in lesser hands, takes these flaws and uses them to his advantage to make for a hell of a good book. How? His powers of description and mastery of the written word are both eloquent and elegant. His control of pacing is exquisite. He’s a writer of great talent, an excellent craftsman.

Mr. Nesbø, like so many, has been touted as “the next Stieg Larsson,” and the best Scandinavian crime wave writer since Larsson died. A strong case could be made against both these statements. First, there is only one Stieg Larsson, nor do we need another; however, second and more importantly, Larsson was a powerful storyteller, but hands down, Jo Nesbø is the stronger writer of the two. Third, it should be noted that neither writer has produced what most would consider typical Nordic crime novels.

The typical Scandinavian crime novel protagonist is a veteran policeman, usually middle-aged, divorced, drinks a bit too much but not to the point of self-destruction. He’s usually unhappy in his personal life and disillusioned with his career. They are, however, usually fairly normal people. Perhaps idiosyncratic, but you wouldn’t mind having them over for supper.

Stieg Larsson and Jo Nesbø, on the other hand, have created powerful, nearly superhuman antiheroes. They might have good hearts, but would you want them in your home? If she didn’t like you, Lisbeth Salander might take offense at something and beat the hell out of you, or do wonky things to your computer and put you under constant electronic surveillance. Harry Hole would like as not show up drunk, suck down all your booze, and puke on the dinner table.

This is what unites authors Larsson and Nesbø: They made their protagonists suffer terrible trials so that we can forgive them their sins. Made them walk through fire so we can love them, so that we can think, “Had I been through such hell, I might be like them too.” Or even, “I wish I could do and say the same things to the people I hate.”

The Leopard is conceptually a huge undertaking for an author, an unusual, eccentric, and excellent work. Highly recommended.