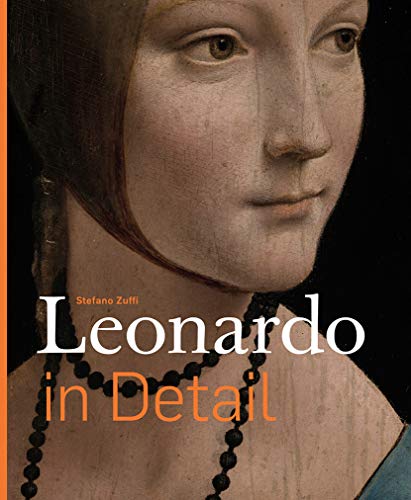 “a solid choice for a novice Leonardo enthusiast, curated by a seasoned Renaissance specialist.”

With thousands of drawings on paper, dozens of journals, and a wide range of mechanical, scientific, and intellectual interests, it is interesting that Leonardo da Vinci is known as a painter when perhaps only 15 of his completed paintings remain extant. Leonardo in Detail reproduces these paintings along with a handful of unfinished works and drawings.

Italian art historian Stefano Zuffi breaks down Leonardo’s paintings to point out what makes them shine as beacons of fine art and how they came to be foundational to our current understand of art history. Leonardo, Zuffi states, was a free thinker who went beyond the teachings of the time to follow the “movements of the soul” and is continuously recognized as a “leading figure in a period of change. . . . Leonardo invites us to overcome limits, to rise higher, to look . . . from a new point of view.” Five hundred years later and we are still striving to do just that.

Zuffi’s brief introduction reminds us of Leonardo’s unprecedented genius but also allows for some human fragilities and failures. Yes, Leonardo may have been a creative and intellectual superior to all around him, but he was also restless, stubborn, solitary, financially distressed, and a “perennially dissatisfied” perfectionist. Productive output was sporadic; attention deficit was consistent.

Full reproductions of Leonardo’s paintings are presented in the first section of Leonardo in Detail. There are 22 master-works included. Not all are paintings and the artwork extends to include an elite subset of drawings. Madonna and Child with a Pomegranate (c 1470), Baptism of Christ (1470–75), and Madonna of the Flower (1480) join with Virgin of the Rocks (1475), The Last Supper (1494–98) and Mona Lisa (1503–?). Virgin and Child with St. Anne and St. John the Baptist (c 1500) and Head of a Woman (La Scapigliata 1504–08) are two of the stand out umber and amber ochre drawings. Another 25 drawings/notebook pages are considered but in smaller format.

As beautiful as the reproductions are, the heart of Leonardo is found in Zuffi’s closeups, enlargements of particular themes in which Leonardo demonstrated his original approach to painting: animals, children, gestures, nature, gazes and smiles. Animals, for instance, were precious to Leonardo. He was a vegetarian who could not stand the thought of harming nature in this manner.

Leonardo’s paintings in this section show a tenderness for the animal kingdom even as he employs an intense energy around them. Horses, lions, an ermine, and a lamb are highlighted examples. Precious is the detailed selection of the Christ child in Virgin and Child with St Anne (1503–19). A toddler-aged Christ is the focus here, tugging at the ears of a lamb, almost intertwining himself into the pure symbolism of foreshadowing. Each stroke of lambswool is meticulously tactile. The lamb’s awkward bony legs contort with a tension to break free in contrast to the Christ child’s smooth, pudgy, playful interactions. This relationship alone speaks volumes, but when moving the focus to the expression on the Christ child’s face one is once more humbled by Leonardo’s artistic capacities.

What captivates artists to this day is Leonardo’s use of body language, gestures, gazes and smiles. Mona Lisa is not the only one to have a mysterious smirk about her. The subtle smiles Leonardo imparted into the countenance of all his women have left many an artist completely baffled, at a loss for how to recreate such a touch. Every painting and drawing of the Virgin Mary, the Saints, and even his wealthy portrait clients were endowed with power and mystique behind their smiles.

Two further subsets at the end of the book cover Leonardo’s works on paper as seen through his fascinations with technology and anatomy. He served the royal courts with his military engineering mind and he assisted the natural sciences and medicine with his passion for understanding the human “machine.” Brief blurbs, contributed by Zuffi here and throughout the other sections as well, explain what the reader is seeing in the sometimes undecipherable illustrations.

Commemorating the 500th year of Leonardo’s death (May 2, 1519), many books and exhibition catalogs are flooding the art book market. Leonardo in Detail adds value to the volumes of material by keeping its analysis simple, straightforward, and uncluttered. It is a solid choice for a novice Leonardo enthusiast, curated by a seasoned Renaissance specialist.