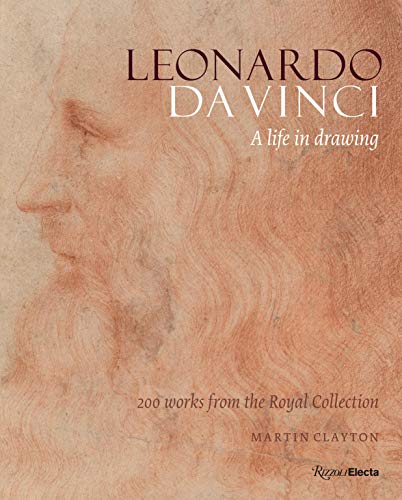 “Leonardo da Vinci: A Life in Drawing marks a unique milestone offering a generous souvenir of his extensive paper-based oeuvre, a miraculously well-preserved body of knowledge still remarkably ahead of its time.”

It has been just about 500 years since the death of Leonardo da Vinci (1452–1519) one of, if not the greatest of, polymaths ever. Often voted the most influential person of all time and the number one historical figure most wanted to be brought back from the dead, 2019 is gearing up to be quite the quincentennial.

Museums around the world are vying for a piece of the celebratory cake. Teylers Museum in the Netherlands, the Uffizi Gallery and Museo Galileo in Italy, the Louvre in Paris are among the leaders in the magnitude of exhibitions planned throughout the year, each trying to outdo the other with the greatest number of Leonardo artworks on display.

But the Royal Collection at Windsor Castle is in the enviable position of owning over 500 original Leonardo drawings, a selection of which will be simultaneously shown at museums and galleries across England, Scotland, Wales and Northern Ireland in the Spring of 2019. Leonardo da Vinci: A Life in Drawing is the catalog that will accompany these exhibits.

Assuming appropriately that most people have heard of and studied Leonardo before, Clayton keeps his introduction brief. Basic biographical information traces Leonardo’s movements around Florence, Milan, Venice, Rome, and France according to his various patronages. He made his living mostly from engineering, architecture, and advising on technical matters, and not so much through painting, the Mona Lisa magnum opus notwithstanding.

Leonardo was a man of paper, which had become a common commodity made from hemp or linen rags, recording everything imaginable on thousands of sheets and in dozens of notebooks. He studied and drew details on music, botany, anatomy, cartography, geology, painting and much, much more, hoping to publish manuscripts about his observations. Thus his curiosity earned him the irrefutable reputation as the quintessential 1500s Renaissance Man even though barely 20 oil paintings were made, zero sculptures were delivered, and none of his treatises were published in his lifetime.

Due to the nature of Leonardo’s multiple, concurrent, long-lasting interests, Clayton has organized the drawings among a loose chronology according to Leonardo’s geographical locations and their presiding topics. In Milan from 1481–1499 he groups engineering and weapons, scientific drawings,  monuments and the Last Supper painting. In Florence, Milan and Rome 1500–1516 he loads map making, landscapes, botanical studies, and treatises on painting and on water among the collection. In France from 1516–1519 are costume studies, equestrian monuments, and deluges.

Each of the 200 illustrations is given short commentary within a loose narrative that winds around Leonardo’s stylistic developments. Images range from his first known and extant drawing in 1473 A landscape in the Arno valley to his last “ideal head” portrait in 1519, The head of an old bearded man in profile. Although the venerable Vitruvian Man is noticeably absent from this compilation, readers will be delighted to flip around these pages, compare and contrast, and get a feel for the depth and breadth of Leonardo’s interests, impressive to this day.

Hopefully the diligent care with which his drawings and papers have previously been maintained will continue over the next 500 years so that our great-great-descendants will be able to throw a superlative party in every city of the world with these very same pictures in the event Leonardo maintains his influential status into 2519.

Leonardo da Vinci: A Life in Drawing marks a unique milestone offering a generous souvenir of his extensive paper-based oeuvre, a miraculously well-preserved body of knowledge still remarkably ahead of its time.