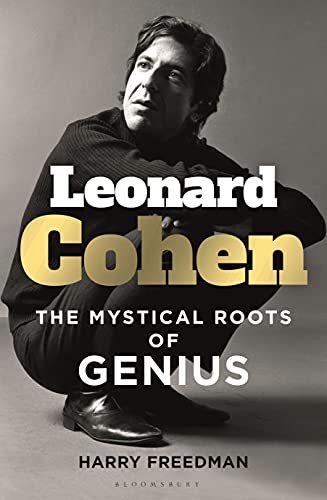 “The redeeming power of Freedman’s book is that it allows his fans to be exposed one more time to Cohen’s incredible personality and intelligence and, for that reason, the book is a success.”

Delving deep into a pop star’s body of work is a slippery slope and many analyses of a band or a singer’s most famous songs—whether it be the Beatles, Bob Dylan, Joni Mitchell, or here, Leonard Cohen—can often feel like the analyst is imbuing the songs with far more layers of meaning than even the songwriter intended.

So here comes Harry Freedman, self-described as “Britain’s leading author of popular works of Jewish culture and history” ready to tackle Leonard Cohen’s oeuvre. In the book’s foreword, Freedman promises he will not deal in analysis of Cohen’s work but rather Cohen’s inspiration—“his extensive use of biblical and religious traditions.”

Well, okay but it feels like that’s splitting hairs. There is more than a little hubris here considering that, as Freedman admits, Cohen “was reluctant to describe his work as having a religious or spiritual purpose.” No matter. Freedman will go on to examine Cohen’s work in that very context for the next 263 pages.

Freedman drives by Cohen’s oft-told creation story and how the singer/songwriter was the devoted son of a prominent religious family in Montreal who only wanted to be a poet. He fell under the wing of some of Montreal’s most well-known poets.

After glossing over Cohen’s bio (which is fair considering several books that have already tilled this soil), Freedman begins deconstructing a selection of Cohen’s songs. You probably don’t need to read this book to know that Cohen’s best-known song “Hallelujah” draws upon the Bible. But Freedman tells you exactly where in the Bible.

“Your faith was strong but you needed proof.
You saw her bathing on the roof.”

That comes from the story of David and Bathsheba, Freedman tells us.

If that helps you appreciate the song better, then this book is for you.

One suspects that Cohen’s humor, which served him well in many an interview and performance, was at least as much responsible for his genius as was the Bible. His humor gave him a unique perspective about the Bible and indeed, life.

Cohen’s humor comes through time and again in Freedman’s book. He tells of the time Cohen landed in the ’60s Swinging London when everyone was doing the Twist. Cohen loved that dance and wrote to his older sister: “The Twist is the greatest ritual since circumcision . . . myself, I prefer the Twist.”

Freedman also recalls what Cohen sometimes said about his signature song “Suzanne.” He was happy that many fans loved the song even though, Freedman writes, the rights to it were stolen from him. Freedman writes: “Cohen always said that this was actually fortunate: ‘It would be wrong to write this song and get rich from it too.’”

But Freedman is right when he declares that a lot of Cohen’s songs sound Biblical. Take the song “If It Be Your Will.” It is, Freedman tells us, very nearly the same introduction we find in the Hebrew prayer book which is, “May It Be Your Will.”

Cohen has always described “If It Be Your Will” as a personal prayer. “Many of its phrases have a biblical resonance, but none is a direct quote from scripture,” Freedman writes.

For many, the quintessential Cohen couplet and the favorite of many a fan is: “There is a crack in everything, That’s how the light gets in.”

From the Bible? Not as much as it’s a distillation of Cohen’s personal philosophy. As Cohen explained to an interviewer: “It is by intimacy with the flaw that we discern our real humanity and our real connection with divine inspiration.”

Cohen described it as his “credo.”

One is not convinced by the end of this book that Cohen drew upon the Bible for his genius as much as his personal philosophy which came about as anyone’s does, through trial and error and exposure to thousands of references. The redeeming power of Freedman’s book is that it allows his fans to be exposed one more time to Cohen’s incredible personality and intelligence and, for that reason, the book is a success.