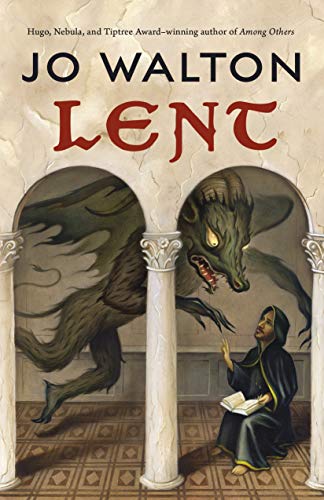 The cover copy of Jo Walton’s Lent promises that it is “a historical fantasy thriller set in Renaissance Florence and in Hell.” And in fact this latest novel from the extraordinary talented and erudite Jo Walton is nothing less. Unfortunately, it takes a commitment of 168 pages reading to realize this fact—and many readers may find themselves giving up in bewilderment before then.

For the first 168 pages offer of Lent no real clue to the novel’s fantasy world.  Instead, the reader is presented with what is apparently a historical novel about Girolamo Savaranola. Yes, that Savaranola, the man who tossed books and art onto the Bonfire of Vanities. It’s a bit of a hard sell as a sympathetic main character for the reader to identify with.

On a historical level, most of us have been taught that book burners and the Inquisition are the villains of the Renaissance, and its heroes are liberal humanists such as Marcelo Ficino and Pico di Mirandola, both of whom appear in this novel. It’s hard to stay interested in a character with a taste for fasting and hair shirts, in contrast to his more glittering companions such as Ficino or Lorenzo the Magnificent. William Blake’s claim that Milton was “of the Devil’s party but didn’t know it” has never seemed so relevant. This reader spent the first part of the book wondering “When are we going to get to Hell and the interesting people?”

Yes, there are demons in the first part of the book, but their primary function is for Savaranola to exorcise them. They are not real, dangerous monsters, but could simply be nothing more than Savaranola’s inner narration of the world as seen through his eyes. In short, the first part of Lent is not a fantasy. Rather, it is a novel of the fantastic, as Tsvetan Todorov defined the term. Like Henry James’ Turn of the Screw, the first part of Lent could equally justifiably be read as a psychological or a magical exploration of Savaranola’s perceived visions and abilities.

The promise that Lent is a thriller is equally problematic for there is no clear central problem driving the first part of the book. Instead, we are simply offered a view of known historical events through Savaranola’s eyes. The episodic nature of the narration, with its chapters being set at yearly or longer intervals whose sole connection is the season of Lent exacerbates the sense of aimlessness in the plot.

However, the book’s seemingly straightforward plot is abruptly upset in a shocking and fiendishly brilliant plot twist that also explains the cruel pun underlying the apparently descriptive title. To say anything further would only ruin the surprise. But the twist happens so far into the book that one is justified in wondering how many readers might have abandoned the book 50 pages earlier, feeling cheated by having been presented with a dutifully accurate historical novel instead of the promised “historical fantasy thriller.”

Even more difficult is the fact that the plot twist brings with it a significant change of voice in the novel. Now we are in a world of real demons and real magic, which everyone sees and accepts. Walton is careful to make clear the connection between the first series of events and the subsequent ones, but it still feels like we have stepped into an entirely different novel.

Jo Walton is a risk-taker as a writer, and that willingness to experiment has justifiably earned her many prestigious literary awards, including a Hugo and a Nebula. In keeping with her reputation, Lent has many virtues beyond the audacity of its conception—first among them being meticulous research. And Walton’s central conceit is genuinely haunting.

And so, despite the fact that a college English teacher will rebel at saying such a thing any reader who finds themselves asking “Where is this going?” after 50 pages or so, should skip to page 168 and find out, before giving up on this structurally flawed, but superlatively imaginative, novel.