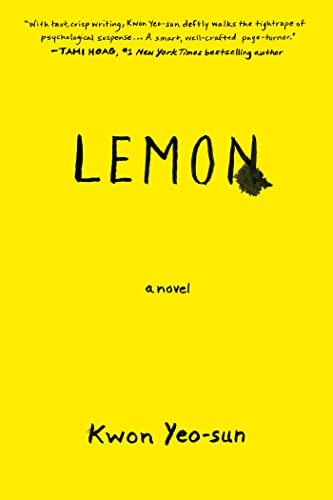 “It is in death that we become meaningless . . . but the living will continue to seek their destinies.”

In the aftermath of tragedy, how do we cope? Grief is expected, of course. It’s not uncommon to blame others for misfortune. In some cases, we may be motivated to exact revenge on those we blame. However we respond to tragedy, its impact may continue to be felt long into the future until we finally achieve acceptance. This, essentially, is the story of Lemon by Kwon Yeo-sun, translated from Korean by Janet Hong.

The novel’s eight chapters cover almost two decades and are told in points of view rotating among three voices, young women who were at one time students in the same high school. Readers will be forgiven for their extreme frustration at having to determine which narrator belongs to which chapter, as the voices are not readily distinguishable and the relationships among the characters are slow to emerge. Similarly, although the chapters are dated by year, they include flashbacks creating a jumbled timeline that may be difficult to straighten out.

On one level, Lemon is a murder mystery, and the first chapter introduces the crime: Kim Hae-on, a beautiful high school student, is brutally murdered. The narrator of this chapter, later revealed to be Kim Da-on, the younger sister of the victim, is actually looking back on the events from a much later point in time and describes the original interrogation of the prime suspect as she has imagined it occurred: a hard-nosed detective grilling a dimwitted delivery boy, Han Manu. Because of inconsistencies in Han’s story, the detective is sure he has solved the murder, but because of the lack of hard evidence, Han goes free, only to be perpetually shadowed by suspicion.

The next chapter belongs to Sanghui, a classmate of Hae-on’s, who encounters Da-on at the library. Having transferred to a school in Seoul from a provincial city, Sanghui is somewhat detached from her schoolmates and the tragedy that strikes Hae-on, but nevertheless looks kindly on Da-on, who, oddly, has now undergone plastic surgery to look more like her sister. Through Sanghui, many more details of the crime emerge, as well as the identity of a second suspect, Shin Jeongjun, a boy who may have been romantically interested in Hae-on. Shin is also not charged with the murder.

When they meet at the library, Sanghui and Da-on discuss their mutual interest in poetry and literature, including recalling an earlier reference to “lemon platt” in the opening lines of James Joyce’s A Portrait of the Artist as a Young Man, which gives the book its title. Sanghui, when she was still writing poetry in her student days, made that allusion in her own work: “Today again I burned the platt./ Nothing goes right for you, Betty Byrne.” The title, then, may be pointing us to the importance of intentions and destinies unfulfilled.

Da-on’s obsession with the crime and her sister’s beauty, as well as with Han Manu, whom she continues to suspect, suggest a high level of mental instability. “I’ve pondered, prodded, and worked every detail embroiled in the case known as ‘The High School Beauty Murder’—to the point I often fool myself into thinking I’d personally witnessed the circumstances now stamped on my mind’s eye.” The murder has affected her behavior—the plastic surgery isn’t the end of it—and she doesn’t seem to find any sense of purpose.

The third narrative voice in the novel belongs to another classmate, Yun Taerim, who had been with Han Manu on the night of Kim Hae-on’s murder. The first-person narration of Yun, however, in her one-sided conversations with doctors, demonstrate that she is even more unstable than Da-on. In one instance, she calls a suicide hotline: “You see, I need help—desperately. It’s a very long and painful story, but I just can’t go on like this anymore. I really need to talk to someone. I can’t sleep at night, and I’m starting to see and hear things. I feel like I’m going to lose my mind.”

It is ultimately Da-on who achieves some awareness of what it all means: “Death turns us into junk. In the blink of an eye we become meaningless, like scraps.”

It is in death that we become meaningless, the book seems to say, but the living will continue to seek their destinies.