Legends of the Fire Spirits: Jinn and Genies from Arabia to Zanzibar 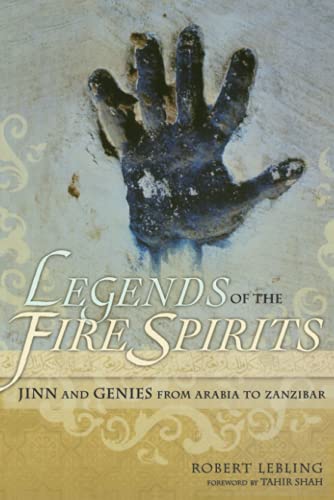 Where does folklore cross into history or religion? How do you study another culture’s stories, even their beliefs, without sounding like you are belittling them or attacking them? These are the questions anyone writing about myths and legends must tackle of they are looking at living narratives that are still part of someone’s life today. Robert Lebling is tackling such a subject in his book, Legends of the Fire Spirits: Jinn and Genies from Arabia to Zanzibar, because according to him, stories of these creatures are a part of Islam today. The foreword by Tahir Shah further indicates that these amazing beings are believed to be active today in the Muslim world.

The best way to deal with such a challenge is to ground yourself in evidence and to diffuse any claims of attack by citing your sources extensively. Lebling does both of these very well, spanning across the millennia, and looking at cultures from North Africa into the Middle East and reaching further into Malaysia. He quotes Arabic, Islamic, and even Western studies that have come before him all the while claiming that he merely hopes this will help others continue research.

That claim serves him well since he has no degree in any academic field one might expect of such a study, only a career as a journalist that gives him the ability to research and to write in an engaging fashion. However, his lack of scholarly training does show through in that he seems unable to pick an interpretation or a variation of a legend and argue for it. Variations are part of folklore and religion—they should never be overlooked—though if you are unsure of your own authority on such issues, it makes perfect sense that you defer to the analyses of others.

The book is divided into five sections. The first is about the origins of the jinn stories, and it is written in a rather backwards fashion. While Islam is the living religion that still mentions these creatures, the stories they are drawn from and are informed by are much, much older. Putting the “Early Legends” before the Islam section is rather odd though one could also argue that starting with what is best known by the reader makes sense. Are these stories known to the target audience, that is: Westerners, primarily English-speakers? Aside from popular cultural stereotypes encountered in movies, TV, and books, Lebling himself states that they are likely not.

That leads to two general criticisms of this book. First, while Lebling does a good job of citing the vast majority of his sources, there were times when an author or story title or literary period was entirely missing from the text. There is no appendix listing the stories in any fashion, only quotations from and discussions of three previous studies. Not everyone will have access to the sources cited, so an excellent book of this type would include as much as possible. That includes visual images where they are mentioned; telling your reader what something looks like is not a substitute for showing a photo or drawing of what you have read. Furthermore, along with a list or images of the sources, great folklore studies often include charts and graphs to summarize what is generally a wide range of stories, names, and features related to the mythical creature in question. There are dozens and dozens of jinn names, locations, and characteristics glossed over—and no way to keep track of them all in this book.

That is an important consideration when we get into chapter two and the historical sources that include jinn stories. History often includes things that seem fanciful or supernatural. In the beginning, “history” was simply the capturing of stories about a society—not an examination of what was fact and what was fiction. In talking about “history,” Lebling does a wonderful job of walking the line between storytelling and intellectual discussion of what these stories may have meant and where they came from.

Think of the stories you’ve read about genies. Sometimes they are tricksters, other times obedient servants, but often there are powerful, evil forces kept in check by the use of ritual or magic. Chapter three looks at examples of jinn interactions with the human world. Sometimes these are direct—such as sexual encounters or possession—but often jinns function much like ghosts or shape shifters as well. Lebling points out repeatedly in the book that the type and behavior of a particular jinn is related to the cultural setting of their storytellers.

Chapter four continues this trend of examining how setting affects story by looking at specific legends around the world. Here Lebling has selected 15 places and given us specific narratives that are most common to that location. These locations can be as large as a nation such as Turkey or Nigeria or more focused as existing solely among the Kurds or the Harran peoples. This chapter intermixes stories with other authors and scholarly interpretations much more than the previous chapters.

Modern and contemporary stories about jinns thrive, but Lebling stays focused on the Eastern narratives in chapter five. Here we have a few charts that are really needed throughout the book, but this section is written in the same fashion as the previous chapters: establishing the story, then the setting, adding some scholarly or authorial comments, and giving some interpretation.

This book rests somewhere between study and sourcebook. It is a study in that Lebling has done a good job of citing sources, making connections, and quoting original texts here and there. However, without a solid, author-driven hypothesis or even viewpoint, Legends of the Fire Spirits cannot rise to the level of a serious, scholarly examination of folklore. Including such a wide range of materials from across time and space could have made for a great sourcebook, but those are missing here. Anyone attempting to follow up will need to go to the sources themselves—which might prove a challenge in local, Western libraries.

The result is a fairly good initial look at the Eastern jinn for the Western reader—exactly what Lebling claims he set out to accomplish.