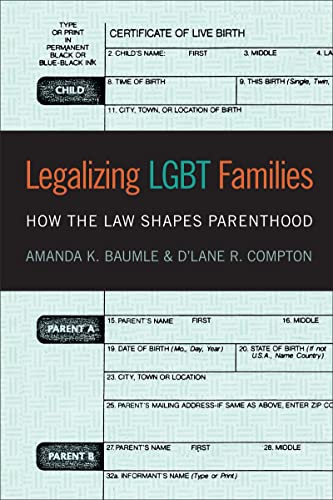 Legalizing LGBT Families: How the Law Shapes Parenthood by Amanda K. Baumle and D’Lane R. Compton is an academic book based on a study that started in 2010. The authors interviewed 137 men and women, and those interviews comprise the bulk of the book. The interviews reflect the problems experienced by same-sex couples that tried to establish their parental rights.

The study on which this book is based began in 2010. Since the study started there has been a rapid change in LGBT legal rights that is not reflected in the book. The book’s analysis is not current and its usefulness is limited.

The first chapter, The State of the Law for LGBT Parents, for example, does not reflect the legal reality as of 2014. The state of LGBT rights in 2010 are very different from what exists now.

Part of the problem lies in the long lead-time required before a book is published. The New York University Press is the publisher, and it is possible the manuscript was submitted months before the U.S. Supreme Court decision in Obergefell v. Hodges was issued in June 2015.

This presented an insurmountable problem for the authors. They could not have known, in 2010, that marriage equality would become universal before their book was published; however, that does not explain the total lack of reference to the U.S. Supreme Court’s decision in United States v. Windsor that was issued in June 2013. These deficiencies render the book less helpful than it might have been.

In the Preface, the authors state their hope “that the stories and analyses presented in this book will add to the overall public discourse about the meaning of the law with respect to families.”

Throughout the book, the interviewees relay their efforts to obtain legal recognition of their families. It seems that many, if not most, were content to engage in do-it-yourself legal drafting rather than engage a lawyer with experience in LGBT legal issues. Some were financially unable to hire a lawyer, others decided that researching the law on the Internet or talking with friends was sufficient.

The authors neglect to include any opinion concerning whether a DIY approach is the best one for LGBT families given the animosity expressed by the opposition. Because the U.S. Supreme Court did not address the issues affecting parental recognition and in light of the blowback from those diametrically opposed to LGBT legal rights, couples that did not consult a lawyer may have not achieved the goals they wanted.

There are advantages to proceeding without a lawyer, including no attorney fees; however, a DIY approach to obtaining legal parental rights is fraught with potential problems, not least of which is setting a precedent that will be used against other couples in similar circumstances. A rudimentary understanding of the law is insufficient to navigate the parental rights waterway. And, sometimes it is cheaper to hire a lawyer in the beginning to do things right especially in unsettled areas of law such as this one.

Parents living in (what used to be called) “recognition states” are in the best position to obtain legal recognition of their parental rights without a lawyer.

But same-sex couples living in (what used to be called) “nonrecognition states” need to proceed with caution. Those states did not recognize same-sex relationships, banned marriage equality, and did not recognize parental rights of partners who were not related to the children. Some of those states continue to oppose legal recognition for unmarried same-sex parents.

Establishing parental rights is especially important for the non-biological parent. That person is a legal stranger to the children and without a court-sanctioned adoption or parenting agreement, remains so. This becomes a major issue when the couple ends their relationship and the legally recognized parent denies the former partner contact with the children. And this book may give false hope to same-sex couples that want to establish those rights.

Marriage alone may not establish parental rights in same-sex marriages--even if the children are born during the marriage. There is a rebuttable “marital presumption” but not all states recognize it.

Many of the study’s subjects sought an adoption. This can be the best way to achieve parental rights that will be recognized in all 50 states. Unfortunately, not all states allow second parent adoption for unmarried same-sex couples. And, at least one state Supreme Court declared second parent adoptions invalid after the fact when a biological parent challenged the adoption. This occurred in North Carolina and resulted in hundreds of adoptions being invalidated.

This book succeeds in showing what various same-sex couples did to ensure that both parents were legally recognized. The stories told by the study’s subjects are interesting and provide insight into why they took the actions they did.

The situation involving LGBT families and parental recognition is very fluid and continues to evolve. This book is a good historical reference and provides interesting anecdotes of individual experiences. Some professionals may find the subjects’ comments interesting. Lawyers that are new to the area of LGBT law will find it has limited relevance. And same-sex couples should be wary before adopting any of the tactics used by the study’s subjects.