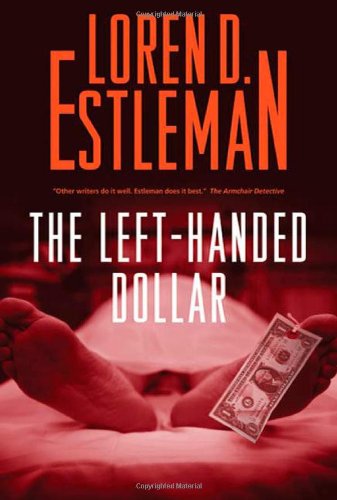 Loren D. Estelman is the best-selling author of more than 60 novels (all done on a classic typewriter, no less) and is the recipient of numerous writing awards including four Shamus Awards, five Spur Awards, and three Western Heritage Awards. His hardboiled noir books featuring Detroit’s own private investigator, Amos Walker, have critics and crime writers comparing him justifiably to Raymond Chandler and Ross Macdonald.

In The Left-Handed Dollar, Estelman is in top form. Amos Walker is as cynical as ever when he is hired by defense attorney Lucille “Lefty Lucy” Lettermore to investigate an old crime case in which she is hoping to clear her somewhat dodgy and explosive client, Joseph “Joey Ballistic” Ballista, a mobster of dire dealings.

Ballista was found guilty of the attempted murder of investigative journalist, Barry Stackpole. The mobster has nothing to look forward to except spending the rest of his life behind bars. But Lettermore genuinely believes Ballista is innocent. Lettermore has a reputation for taking on unpopular cases and is forever at loggerheads with the powers-that-be. A classic description of Lefty Lucy by Walker awaits readers on page 15: “She uncrossed her ankles and laid a pair of Popeye forearms on the desk. From three feet away I could smell the coffee on her breath; I think she chewed the grounds when the water was too slow. . . .”

After much soul-searching, Walker eventually becomes convinced that the lowlife gangster is probably innocent of the crime and decides to take the case—this despite the fact that it will surely complicate matters in his life. This is not simply just another situation for our intrepid investigator to earn a bit of money and pay the bills. Stackpole—who was seriously maimed and lost a leg in the explosion Ballista was charged with—also happens to be one of Walker’s oldest friends. Not only will the search for the truth bring him into conflict with Stackpole and the police, but ultimately with the killer himself who will stop at nothing to keep his sorry you-know-what from going to prison.

To begin his investigation, Walker interrogates former wives of Ballista and soon discovers that they all share a form of art with their former husband: the art of lying. Walker has never taken heed of the old saying to let sleeping dogs lie, and his questioning soon becomes the catalyst for bodies piling high.

Each chapter in The Left-Handed Dollar houses the requisite page-turner and the inventive and fast-paced plot is a delight to behold. Amos Walker is the kind of PI we’d all love to have working for us if we ever found ourselves in trouble or need.

This latest installment from Estelman proves he is king of snappy dialogue and original plot twists and his ability to keep all the plates spinning is always impressive. The Left-Handed Dollar will secure even more accolades to his expanding list. Bet your bottom dollar on that, be it left-handed or right-handed.