The Ledger and the Chain: How Domestic Slave Traders Shaped America 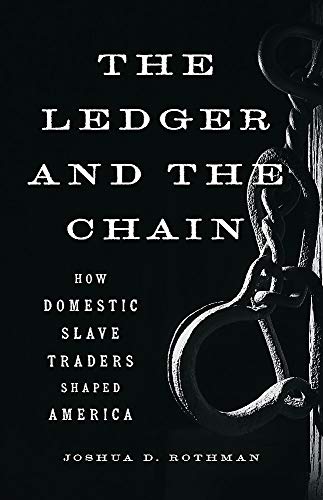 “The Ledger and the Chain emerges as an essential and definitive work to stand alongside Walter Johnson’s Soul by Soul, Edward E. Baptist’s The Half Has Never Been Told, and the essay collection Slavery’s Capitalism, convincingly positioning the prime movers of the slave trade at the fulcrum of an expanding American economy and credit system fueled by the forced labor of the Black bodies they bought and sold.”

In The Homes of the New World: Impressions of America (1853), Swedish reformer Fredrika Bremer describes touring the New Orleans slave market during her travels in the United States in lavish and revealing detail. She recalls a good-humored young Black man priced at $2,000 to whom she “took a great fancy,” a “pretty light mulatto” girl who apparently took no offense at having her mouth opened by a prospective purchaser to inspect her gums and teeth, and a fifty-ish white slave trader with a “beautiful bloom” on his cheeks, who would, she surmised, have gladly crushed the entire human race in his hand and converted it to money. In summary, she declares, “I saw nothing especially repulsive in these places excepting the whole thing.”

When she passed through New Orleans at some point between 1849 and 1851, Bremer most likely never stood face to face with John Armfield or Rice Ballard, and certainly never encountered their deceased former partner Isaac Franklin. But to a great degree, she was observing the public face of a mature human trafficking industry that owed its factory-like industrial cast to those three men, who had largely defined the business when they built the largest and most profitable slave-trading firm in the United States in the 1830s.

“Few slave traders were more successful, and none were more influential than Isaac Franklin, John Armfield, and Rice Ballard,” writes historian Joshua Rothman in his brilliant new group biography, The Ledger and the Chain: How Domestic Slave Traders Shaped America. “By the mid-1830s, their company was among the most formidable businesses in the South, with unmatched preeminence in the slave trade and a geographic reach rivaling any enterprise in the United States.”

Although January 1, 1808, brought a ban on the trans-Atlantic slave trade that officially ended the importation of enslaved Africans to the United States, the domestic trafficking of enslaved people continued unabated, enjoying federal protection only occasionally circumscribed over the next five decades by inconsistently enforced state laws. As American cotton production began to explode following the War of 1812, accelerated by the expropriation of vast swaths of Native American land throughout the deep south, the demand for enslaved labor to produce the cotton grew exponentially as well.

As Rothman recounts, Franklin, Armfield, and Ballard arrived in the slave trade via different paths. But all three anticipated the massive, forced migration of the slave population from Virginia and Maryland to the lower south that the ascendant Cotton Kingdom would require, and all recognized “the changes that would transform it from an irregular business to a more structured and heavily capitalized operation.”

Although Franklin and Armfield and Ballard featured in a handful of mid-20th century biographies from historians such as Wendell Stephenson and Isabel Howell, The Ledger and the Chain is the first book to concern itself entirely with the converging lives of all three. Rothman does an exemplary job of describing how the three established slave-trading outfits at the Chesapeake end of the domestic trade in Maryland, Alexandria, and Richmond, as well as deep south outposts in Natchez, Mississippi, and New Orleans; and how they achieved greater efficiencies in transport (both in terms of travel time and lost potential profit due to disease and death) by often delivering their human cargo via their own brigs, rather than hired ships or via arduous overland travel by chained coffle. Rothman also documents how the partnership came together and profited its members, and how they contended—sometimes expertly, but not always successfully—with wildly fluctuating cotton prices, banking instability, and a trade based increasingly on long-term credit.

Rothman’s book draws on letters and other sources apparently unavailable to the slave traders’ earlier biographers. In the absence of such material, earlier Armfield biographer Howell credits the slave trader for having the fortitude to endure his “strenuous” work and relies on the curious assumption that Armfield’s strong Episcopal faith somehow constrained his actions as an enslaver and retailer of Black bodies, and an aggressive trafficker and serial rapist of light-skinned “fancy girls” who (with like-minded correspondents) bragged of his exploits as a “one-eyed man.”

In Rothman’s telling, the morality of the enterprise, the violence that sustained it, and destruction of families it often imposed never inhibited the actions of the book’s three principals.

Not surprisingly, The Ledger and the Chain bears less resemblance to mid-century biographies than more recent scholarship on the slave trade. The Ledger and the Chain emerges as an essential and definitive work to stand alongside Walter Johnson’s Soul by Soul, Edward E. Baptist’s The Half Has Never Been Told, and the essay collection Slavery’s Capitalism, convincingly positioning the prime movers of the slave trade at the fulcrum of an expanding American economy and credit system fueled by the forced labor of the Black bodies they bought and sold.

One issue that Rothman addresses in The Ledger and the Chain is the social status of slave traders. The more traditional view, in keeping with the presumption of propriety and gentility among the enslaving class that romanticized slave-labor camps as pastoral “plantations,” held that slave traders were social outcasts, tolerated when required for business purposes but otherwise regarded as coarse and disreputable lowlifes.

In Slavery and the Domestic Slave Trade, E. A. Andrews wrote in 1836 (the last full year of the Franklin-Armfield-Ballard partnership), “Nothing, however, can reconcile the moral sense of the southern public to the character of a trader in slaves. However honorable may be his dealings, his employment is considered infamous. He can hold no rank in society, nor can he, by any means, push his family into favorable notice with persons of respectability. The sale of slaves, also, is said to be generally accounted disreputable, unless the character of the slave, or the pecuniary circumstances of the owner induce him to do it, but apologies are rarely wanting.”

Rothman, like Johnson and Baptist, contends that slave traders were as integral to southern society as the trade itself, in a country where a human being was sold “every 3.5 minutes.” Franklin, Armfield, and Ballard freely associated with the elites of the business world in which they functioned, alongside others of comparable wealth. Recognizing the social privileges that “men who sold other people’s children for profit” enjoyed is essential to stripping away the myth of moral rectitude and decency among enslavers that Rothman and other recent scholars have effectively debunked.

“We lean on fictions and convenient clichés that misrepresent the past and perpetuate the notion that the atrocity of the domestic slave trade was somehow atypical of American slavery and marginal to the broader development of the United States,” Rothman writes. “Slave traders worked in open collusion with legions of slaveholders, bankers, merchants, lawyers, clerks, judges, sheriffs, and politicians, who all recognized their indispensability, and as in most occupations, their standing, both in society and the business world, depended on perceptions of their integrity and reliability.”

The Ledger and the Chain demolishes the fictions that have traditionally placed enslavers at a genteel distance from the atrocities that underwrote their lives and defined (as Walter Johnson argues in Soul by Soul) their identities and social stature. It also does much to explain how the racial attitudes and social stratification that allowed the slave trade to flourish at the center of the American economy in the decades before the Civil War, enabled the extortion of Black labor to endure with few appreciable alterations in the deep south for nearly a century thereafter, until mechanized cotton production dramatically reduced the need for it.

“An American history of race and capitalism that accounted fully for such structural inequalities and cultural priorities, and their broad cascade of consequences, would be neither simple nor linear,” Rothman writes. “But the core of that story would describe how enslaved people were denied the capacity to keep or pass to their children the wealth they generated and how those who enslaved them took their labor and their bodies as spoils . . . Its hinge would be slavery and the slave trade that Franklin, Armfield, and Ballard played greater roles in shaping than anyone in American history.”