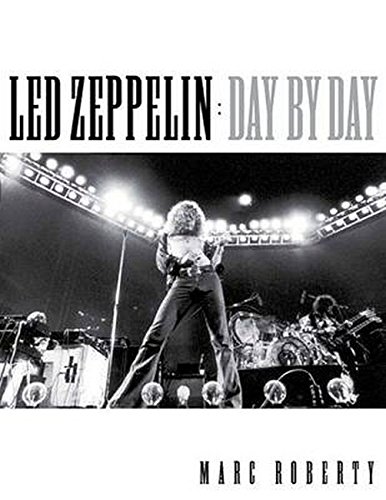 Unsurprisingly, there have been numerous collections of photographs and thousands of words published about Led Zeppelin. Everything from lead guitarist Jimmy Page’s alleged preoccupation with the occult to the band’s wild antics on tour has been chronicled. But accomplished music journalist Marc Roberty’s exhaustively researched book provides a definitive, day-by-day account of the band’s glory days, and not so glorious demise.

The images used throughout the book tell the story in a way that words can never recreate. In particular the photographs of renowned concert photographer Carl Dunn capture the energy and presence of a unique band, including a classic image of Page playing the violin-bow section of Dazed and Confused at a Texas festival.

As well as photographs, there are images of posters, ticket stubs, and album artwork, all of which help to encapsulate the mood of an exceptional musical era that produced guitar gods like Eric Clapton, Jeff Beck and John Mayall as well as Jimmy Page. All of these great guitarists played with The Yardbirds, the earliest incarnation of Led Zeppelin.

When The Yardbirds fizzled out, Page decided to form a new band and fulfill existing tour obligations. Page shared his plans with a handful of peers including Keith Moon, the legendary drummer with The Who, and his band mate John Entwhistle. One of these two musicians joked it would go down like a lead Zeppelin. This appropriately “heavy” name struck a chord and with a change of spelling to avoid mispronunciation, Page had the name for his new band that not only “tagged its musical style,” but also found a source of creativity to mine for the artwork of its first album cover.

Page asked the vocalist Terry Reid to join him, but Reid opted to pursue his solo career and instead recommended Robert Plant. The rest, as they say, is history. Drummer John Bonham was suggested by Plant and Page’s fellow session musician John Paul Jones was also signed up.

Page and Plant shared the same taste in music and musical direction so it is not surprising that the song writing and performing partnership they formed produced some of the most staggeringly exciting music and gigs of the decade.

For those who were musically in tune with this scene, there is something of a “Kennedy” moment about the first time you heard a Led Zep track, or saw them play live. They were like nothing else on the planet, musicians and performers at the top of their game. A London gig in 1971 is described by Roberty as a “five hour visual feast featuring support bands along with plate spinners, a few acrobats and several pigs wearing policemen hats and ruffles around their necks.”

The band’s success and notoriety grew until in 1975 a car crash left Plant and his wife, Maureen, in a bad way with Maureen fighting for her life in a Greek hospital. Thankfully they both survived, but drugs and alcohol nudged the band into a steady decline. Finally in 1980, drummer John Bonham choked to death in his sleep after a particularly heavy vodka drinking session.

Page might have initially believed that drugs were opening creative doors for him, but addiction slammed them firmly shut. “The band’s slow descent had finally ground into the buffers.” A lengthy battle against Page’s heroin addiction ensued until finally he was clean. But he and the other surviving members of Led Zeppelin were mortified by the death of their drummer and musical soulmate. The surviving band members only ever played together again at a handful of charity gigs and a tribute concert to Ahmet Ertegun, who had first signed the band to Atlantic Records in 1968.

The depth of analysis in Roberty’s definitive chronicling of “the greatest rock band ever to step onto a stage or into a recording studio” is compelling and reveals the real tragedy behind the band. In Roberty’s own words, they were “a bunch of talented young guys who were not prepared, or equipped, for the massive fame and wealth that came their way in a relatively short period of time.”

Led Zeppelin still has a massive fan base and is idolized by millions of followers, both young and not so young. This book is definitely one for the dedicated fan, with every detail exhaustively researched and verified right down to the set list, length of time of each and every gig, along with the audience reaction to it. For others, glimpsing the photographs will be enough to take them back to the time when four young musicians broke the mold.

After a successful career as an accredited journalist, PR director, and magazine publisher, in which she commissioned and selected photography, Viv Young began screenwriting and published a novel.